19.09.2022
Jakarta
Press and Information team of the Delegation to ASEAN 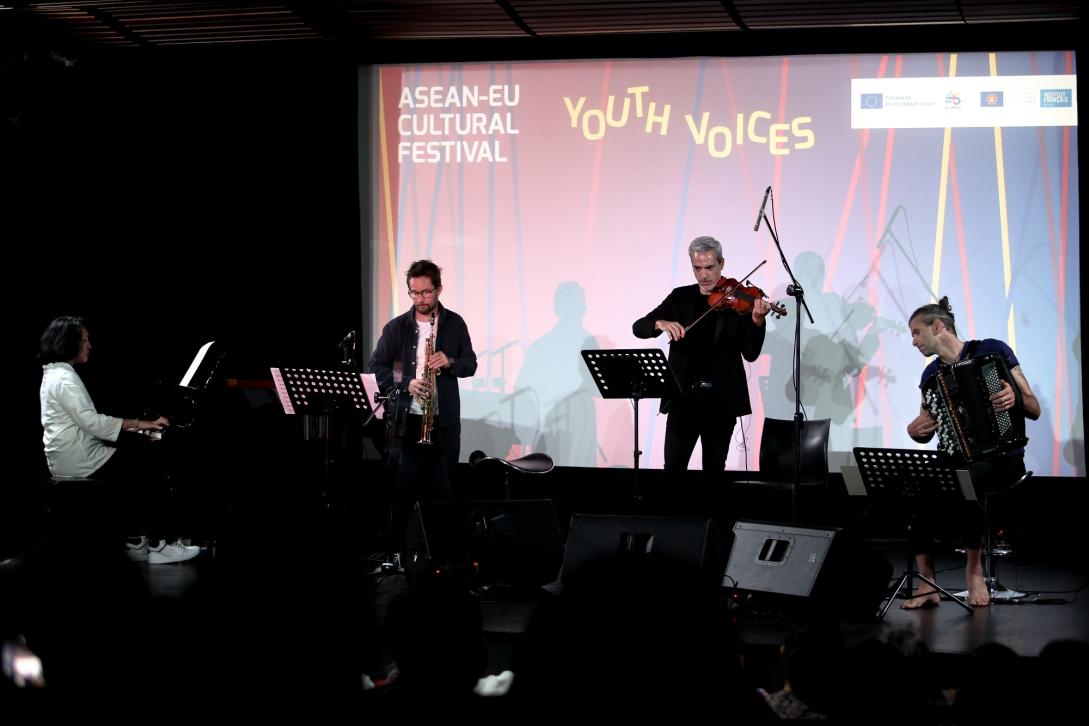 From the 19 to 25 September 2022, the first edition of the ASEAN- EU Cultural Festival will take place offline and online in Jakarta, Bangkok, Phnom Penh to celebrate the 45th anniversary of ASEAN-EU relations.

Entitled Youth Voices, the festival wishes to take a close look at the youth, bringing together and acting as a meeting place for cultural activists from both regions.

A new generation of artists share their ideas and hopes for the future, learn from each other thus strengthening connections between the two continents, for a more inclusive, sustainable, resilient global community.

The opening event in Jakarta on 19 September is a jazz concert that brings together musicians who are passionate about exploring new soundscapes and invites the listener to discover new sonorities, in which sounds and genres intertwine and cross.

The award-winning French jazz accordionist Vincent Peirani together with saxophonist Émile Parisien and violinist Sébastien Surel, takes us on an original musical journey in which traditional Southeast Asian melodies and his own original compositions resonate and form dialogues with one another. The trio is joined by one of the most brilliant musicians of the Indonesian archipelago, pianist Sri Hanuraga, a major and unavoidable figure in the young Indonesian scene.

Mr Lukas Gajdos, Chargé d’Affaires a.i. of the EU Delegation to ASEAN said, “The EU-ASEAN Cultural Festival aims to promote people-to-people linkages and connectivity between Europe and Southeast Asia. It endeavours to explore the enormous potential and dynamic synergy of intercultural collaborations and artistic co-creations between the two continents.”

As co-organiser of the Festival, Ms Elizabeth T. Te, Chargé d’Affaires, a.i. of the Permanent Mission of the Philippines to ASEAN, as Country Coordinator for the ASEAN-EU Dialogue Relations in Jakarta, said: “ASEAN and the EU are rich in cultural diversity and heritage, and both regions produce world-renowned artists. It is hoped that tonight’s concert and the music of featured artists would not only bring us closer together but inspire our regions to collaborate more meaningfully.”

Mr Stéphane Dovert, Counsellor for Cooperation of the Embassy of France, added, “Music is a universal language that connects and binds us to one another, despite our differences. We are extremely happy and proud to have a French Jazz band be the opening act for this important new festival that celebrates the long-term friendship between ASEAN and European countries.”

The festival programme includes jazz musicians from different backgrounds, who come together to create unexplored soundscapes and rock guitar riffs and rap flows that echo the interrogations of art and creation on today’s greatest issues; movies that reflect the hopes of a rising generation and the respects of individual and collective rights; the exhibition Butterflies count not months but moments and have enough time which brings together the young generation’s artistic views on the idea of nature as a site for environmental and philosophical imagination. Finally, a photo exhibition that gives an historical perspective about the EU - ASEAN cooperation in the past 45 years.

All events presented at the festival, both onsite and online, are free of charge.

The festival is funded by the EU and organised in partnership with ASEAN.