With the help of the European Union, farmers continue to grow quality cereals

08.02.2022 Press and information team of the Delegation to BOSNIA and HERZEGOVINA

The wheat fields that stretch across the Dubica plain are the second home for Živko Kavedžija. This 27-year-old young man from Kozarska Dubica has been growing wheat, corn and soybeans for the last ten years. Harvest time for him is the most beautiful period of the year as he gets to reap the golden fruits of his labour. 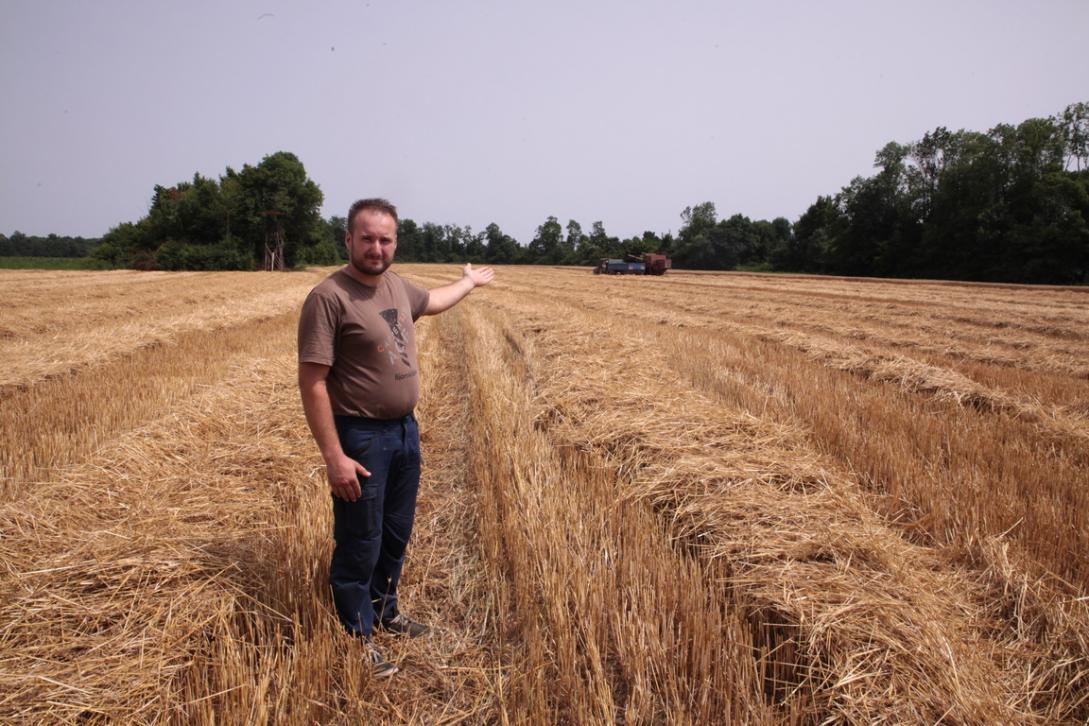 The wheat fields that stretch across the Dubica plain are the second home for Živko Kavedžija. This 27-year-old young man from Kozarska Dubica has been growing wheat, corn and soybeans for the last ten years. Harvest time for him is the most beautiful period of the year as he gets to reap the golden fruits of his labour.

“I live alone with my mother and mostly work alone in the field. The two of us make a living from growing cereals, and the assistance we received meant a great deal for us,” says Živko at the start of the conversation.

The assistance referred to by Živko was provided by the European Union through EU4AGRI project to Dubica’s hard-working farmers so that they can continue growing quality cereals in a year marked by a global pandemic.

“It meant so much to us that we got wheat seeds, nutrition and fertilizers at the very start, before sowing. Through this project, we had a secure purchase of cereals, its higher price and lower investment costs,” explains Živko.

Živko is one of the subcontractors of Jelena d.o.o. Company from Kozarska Dubica, in the lead of activities carried out through EU4AGRI project. The total value of this investment is around BAM 200,000, of which the European Union has provided financial resources in the amount of approximately BAM 150,000.

“The project was vital for our region. The last few years we had drought resulting in lower yields, followed by a pandemic. People have been affected greatly in previous years, so for 41 of our subcontractors, this was valuable assistance,” explains Marko Vlajsević, Director of Jelena d.o.o. Company.

For all 41 subcontractors of Jelena d.o.o. Company, the project provided wheat seeds for six hectares of arable land. Thus, with the help of the European Union, the farmers involved in this project planted a total of 246 hectares of wheat in the fertile fields of northern Bosnia and Herzegovina.

Among them were the brothers Milanče and Stevan Vukić, who have been growing various cereals for the last 15 years.

For them, much like other farmers, every year is unpredictable, but this one marked by a pandemic brought additional uncertainty.

“We are grateful for the assistance since we provide for six family members from our work. The wheat we got through the project was of good quality and this year we had a good yield, which is why we are happy. This is hard work, but it is important for us because it is our livelihoods,” explains Milanče.

Out of 41 subcontractors involved in this project, adds Marko, Jelena d.o.o. Company bought about 2,000 tonnes of wheat at a price ten percent higher than the market price, which provided each of them with additional income.

In addition to these benefits for the farmers from Dubica, the project was important also for Jelena d.o.o. Company, operating successfully for 27 years now.

“Thanks to this project, we have increased the purchase quantities of cereals from our subcontractors and offered buyers with high-quality flour as a final product. We here in Bosnia must also eat quality flour,” says Marko.

For Marko and other subcontractors of Jelena d.o.o. company working in the field is often demanding, but they stress that it makes each of them happy and fulfilled.

“This is the job of my life. It is the love that binds me and the soil. It is a risky business, but I could hardly imagine my life without it”, concludes Marko.

The EU4AGRI project is a four-year initiative (2020-2024) aimed at modernising the agri-food sector, creating new jobs, as well as retaining existing ones and supporting recovery from the COVID-19 crisis in Bosnia and Herzegovina. The total value of the project, funded by the European Union, is 20.25 million euros, and it is jointly implemented and co-financed by the United Nations Development Programme (UNDP) in BiH and the Czech Development Agency (CzDA).

Bosnia and Herzegovina will contribute to strengthening European crisis response

Video: We are connected through history, market, reforms, support and future!