12.07.2022 Press and information team of the Delegation to BOSNIA and HERZEGOVINA

Fifty victims of the genocide against Bosniaks in Srebrenica were buried with dignity yesterday in the presence of their grieving families. The sight of their caskets, surrounded by their loved ones, is a heart wrenching one, especially when realising this is only a small fraction of the over 8,000 men and boys who were massacred during Europe’s single worst atrocity since the Second World War. 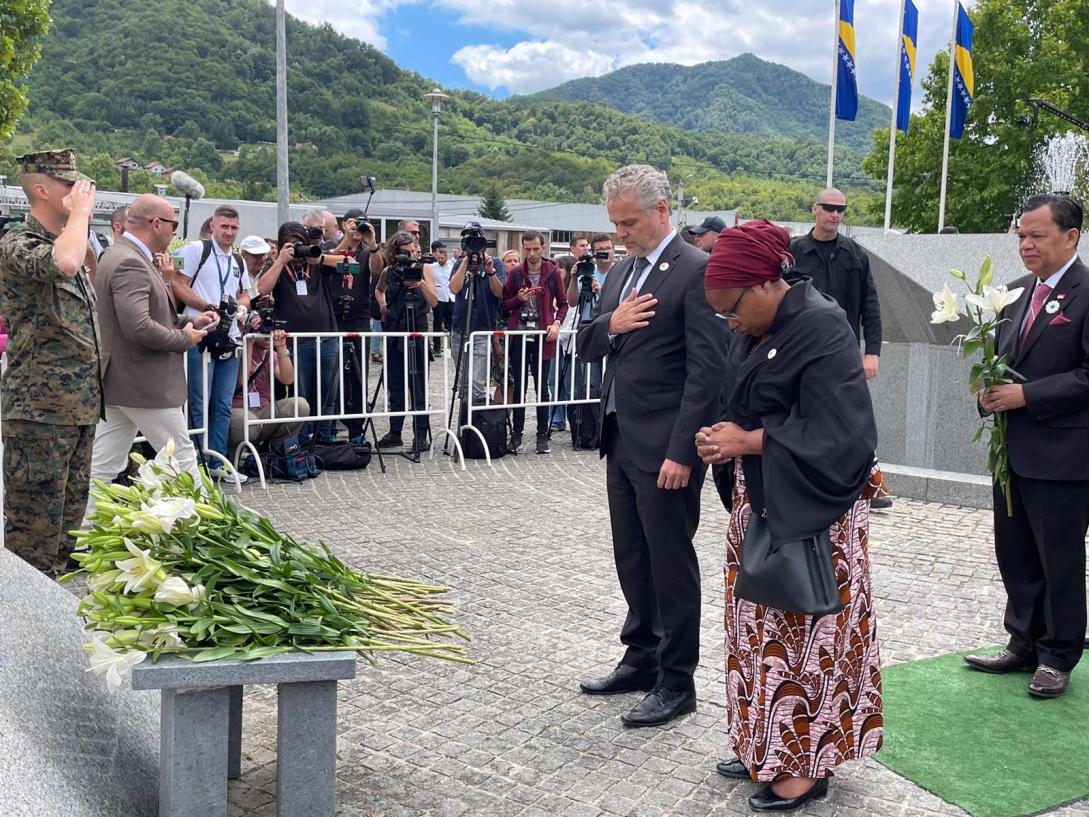 There is no way for a normal human mind to comprehend what happened at Srebrenica in the days following 11 July 1995. It is impossible to imagine the scale of the crime and the human depravity that led to the engineering of genocide.

When contemplating the enormity of the genocide, one must never lose sight of the fact that the people murdered at Srebrenica were individuals, each of whom had their own personality, their own dreams and whose uniqueness is missed every day by those who loved them. In keeping with the spirit of the moving Quo Vadis Aida, this year’s commemoration pays special attention to the role of women in keeping alive the memory of those who were killed during the genocide. They are Srebrenica Heroines not just for their perseverance and resilience in the face of unimaginable tragedy, but also because their fight for justice reminds us that behind every tombstone there is a loved one, a family member, a father, a brother, a son.

One must never forget the memory of the victims. Because to do so would be a perpetuation of the crimes. Genocide differs from other atrocities in that it aims at the extinction not only of individuals, but also attempts to erase a national identity. In striving for ethnic purity, it denies the coexistence, friendship and familial relations between people of different backgrounds, and makes it more difficult for these relationships to be rebuilt in the future.

After an event of such inhumanity such as Srebrenica it is understandable that words such as reconciliation sound hollow, or indeed insulting to the victims. No-one can be expected to forgive genocide. And indeed, without justice, full respect and recognition for the crimes, the victims and the human loss, true reconciliation will remain impossible. This is true for all atrocities committed during the war, and especially for the Srebrenica Genocide because of the special character of the crime.

Nonetheless, it is also clear that the failure to create a prosperous, successful Bosnia and Herzegovina based on harmonious inter-community relations provides a victory for nationalism and the mind-set that led to the genocide in Srebrenica. The lack of true reconciliation continues to cause pain and provides fertile ground for the politics that hold the country captive in time. It would be good to see a shift from memorialization serving political goals rather than the interest of the victims and survivors. We must work together to ensure the country and its people can escape this cycle.

Unfortunately, too many choose the path of escalating, rather than calming tensions. Placing pictures of killed Serbs, including soldiers of the Army of the Republika Srpska, along the road to the Srebrenica-Potocari Memorial Centre is one of the latest examples of actions deliberately designed to provoke. I would like to stress that we recently commemorated and expressed our deepest sympathies for the Serb civilian victims of Podrinje, as we consistently have done in Donja Gradina for the victims of facism during WWII. Every single picture of a civilian victim is a person that is dear to a family that mourns them. It is necessary – and we do –  recognise the pain in every community. However, it must also be done in a way that respects and honours the pain of others with mutual empathy. In this regard, the Mothers of Srebrenica have led by example.

It is also important to note that provocative actions are clearly not exclusive to one community – the recent desecrations of the Serb Orthodox Cemetery and the Partisan Memorial Cemetery in Mostar are also actions designed to trigger emotions and raise tensions.

While we cannot expect victims to embrace reconciliation, this is exactly what we expect from societal leaders. To set the tone for a better future. They have a duty to bring their citizens together, especially young people, around a common ambition, built on trust, mutual understanding and respect for one another. They have to acknowledge historical facts, honour the victims and genuinely promote reconciliation by confronting the roots of hatred that led to the war-time atrocities, including the genocide. What I see is that many locations are longing for this type of leadership, and even some that are fortunate to receive it. This approach however remains sorely absent in the political culture at the top level.

There are incredible people in Bosnia and Herzegovina who are working tirelessly for a better future that integrates all of the country’s different cultures in a way that respects history. Meeting with civil society activists committed to building bridges is one of the most inspiring parts of my job. There are numerous examples, including the work done by the Post-Conflict Research Centre, the Srebrenica Sara Association for Youth and Women, the Centre for Peacebuilding in Sanski Most, which seeks to rebuild trust and foster reconciliation among the people of Bosnia and the  ‘Kvart’ Youth Centre, in Prijedor, which initiated a memorial to children killed during the war, and is a positive example of multi-ethnic youth activism working on reconciliation and human rights. There are many more. I am glad the EU is able to provide financial as well as moral support for such peacebuilding activities.

In my native Austria as well as in Germany, it is compulsory for all schoolchildren to learn about the Holocaust and visit an extermination camp. Educating children, as well as adults, about what humanity is capable of is key to preventing such acts in future. Yesterday was my seventh visit to the Srebrenica-Potocari Memorial Centre. The site never loses its capacity to shock, but each time I visit it also renews my determination to support all efforts to prevent hatred from taking root in Bosnia and Herzegovina again. I am deeply impressed that the Memorial Centre continues to drive a constructive agenda of memorialisation geared towards building lasting peace.

The phrase ‘Never Again’ carries a particular poignancy this year, with Russia’s criminal aggression in Ukraine bringing war back to Europe. Srebrenica was one of the darkest pages in Europe’s modern history. We will continue to carry a sense of shame that more was not done to prevent these terrible events. Europe and the broader world have learnt painful lessons from Srebrenica, and our unwavering support for Ukraine is a result. Current times prove how fragile peace on this continent can be, and also why we must never forget what happened in Srebrenica in July 1995.

Blog by the Head of the Delegation of the EU to BiH and the EU Special Representative in BiH, Ambassador Johann Sattler