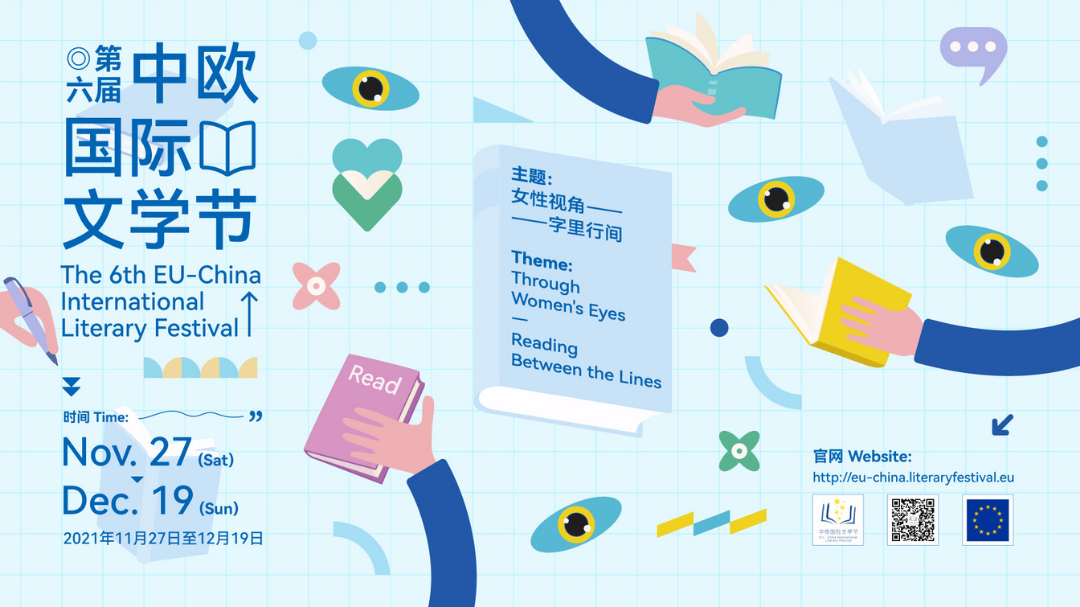 The Delegation of the European Union to China is delighted to announce that the 6th EU-China International Literary Festival will take place from 27 November–19 December 2021.

In keeping with the tradition of exploring a different angle each year pertaining to the world of literature and creative writing, for this festival our writers will engage with the theme

“Through Women’s Eyes – Reading Between the Lines” to celebrate the diversity, talents and creativity of women writers across Europe and China.

This year the EU-China International Literary Festival has invited leading female novelists, short story writers, poets, non-fiction writers, screenwriters, and playwrights from the 27 EU member states and from several provinces across China to discuss their work, creative ideas and sources of inspiration.

The Festival, which will be held largely online to circumvent the pandemic, boasts an amazing line-up of leading writers and thinkers from Europe and China who will engage through three weeks of lively literary discussion.

The European authors invited to participate include a host of celebrated names who have won major accolades for their writing, including the EU Prize for Literature, the Eureka Award, the Kleist Prize, the Friedrich Hölderlin Prize, the Kvirin Award, the Premio Luso-Español de Arte y Cultura, the Vergílio Ferreira Award, the FIL Prize in Romance Languages, the Hermann-Hesse-Literaturpreis and the International Stefan Heym Prize, among many others.

Speaking before the opening of the festival, H.E. Ambassador of the European Union to China Nicolas Chapuis  referred to the importance of this event: “Our EU-China Literary Festival is the place where European authors enter into a creative dialogue with their Chinese counterparts. The featured writers from the EU and from China nurture new artistic visions through unique cross-border intellectual dialogues.”

The present edition, titled “Through Women’s Eyes – Reading Between the Lines”, is dedicated to the diversity and creativity of women writers across the EU and China. Ambassador Chapuis explained that, “Putting the spotlight on female writers gives audiences the chance to discover the extraordinary value attached to women’s writing and cultural production: a value, which has long been ignored and which has only gradually gained recognition over the last century. There is no better moment than now to highlight the contribution of women and women’s writing to shaping and enriching our culture and our civilisation. At this critical moment of change, women’s engagement in the economic and social recovery of today’s world is essential,”.

The festival will comprise literary presentations, discussions, readings, podcasts, in-depth reports and more delivered over a range of platforms in China and internationally. Come join us!

Hello! Good afternoon to all! Xiawu hao from Beijing! It is a delight to have today the opportunity to launch the 6th edition of the EU China Literary Festival.

Literary and linguistic diversity represent the European Union’s history and identity. We are proud, as we should be, of our rich cultural traditions in the European Union and wish to make them widely available both to our long-term and to our new audience in China.

Regrettably, once again it is held in an online mode. But I do hope that like last year we will be able to reach large numbers online of listeners and readers across China.

This EU-China Literary Festival is the place where authors from the EU enter into a creative dialogue with their Chinese counterparts.

And in keeping with the tradition of exploring every year a different angle pertaining to the world of literature and creative writing, we dedicate this year’s Festival to the diversity and creativity of women writers across the EU and China.

This edition has invited almost 50 leading female novelists, writers and poets from the EU and from China to discuss their work, their creative ideas and the world that inspires them.

The literary luminaries from the EU and China will enter into dialogue featuring insights into their lives, their works, and the unique character of their literary traditions.

From November 27 until December 19, Chinese audiences will be able to enjoy an exceptional wealth of female literary talent from the EU and from China through this Festival’s dedicated online channels and platforms.

Now putting the spotlight this year on female writers is vital.

First of all, we aspire to give audiences the chance to discover the extraordinary value attached to women’s writing and cultural production.

The true value of women’s writing was long ignored and has only gradually gained recognition over the last century.

Most of the European and Chinese women who are invited to participate in this edition are celebrated, award-winning writers, best-selling novelists, literary stars and applauded cultural celebrities.

Secondly, after almost 2 years, the world is still struggling in its fight against the Covid pandemic. It has shaken our way of life and forced us to get out of our comfort zones.

It is now more than ever important to cherish culture and cultural activities to cope with these challenges and, more importantly, to preserve and protect our soul and values.

I was reading earlier today on a Chinese social media from a distinguished Chinese literary professor the idea that literature today is both an offering and a saving: in Chinese “xianshen” “offering oneself” and “zijiu” “saving oneself”. I think it is a very good image at this moment

And also at this moment of societal change, especially women’s engagement in the economic and social recovery of today’s world is of course essential.

We wish to celebrate and honour the contribution of women and women’s writing to shaping and enriching our culture and our civilisation to recover from these troubled times.

With your eyes and  ears, through articles, videos and podcasts, you are invited during the Festival to dive into the world of books and inspiring written words and explore the cultural perception of women about today’s world.

Let us celebrate together the value of literature in our lives and encourage the aspiring women writers in Europe and in China.

I invite you to lean back, reflect, “read between the lines” and try to see the world “Through Women’s Eyes”.

To conclude, I wish to thank all our partners and friends who are contributing to the success of this Festival: the embassies of the European Union member states in China, the organisers of the Literary Festival, the writers from Europe and China who dedicate their time and their passion, as well as journalists and all the media that help us promote widely this exciting programme.

I wish you a successful 6th EU-China Literary Festival! Thank you! Xiexie!