10.06.2022
Beijing, China
Press and information team of the Delegation to CHINA 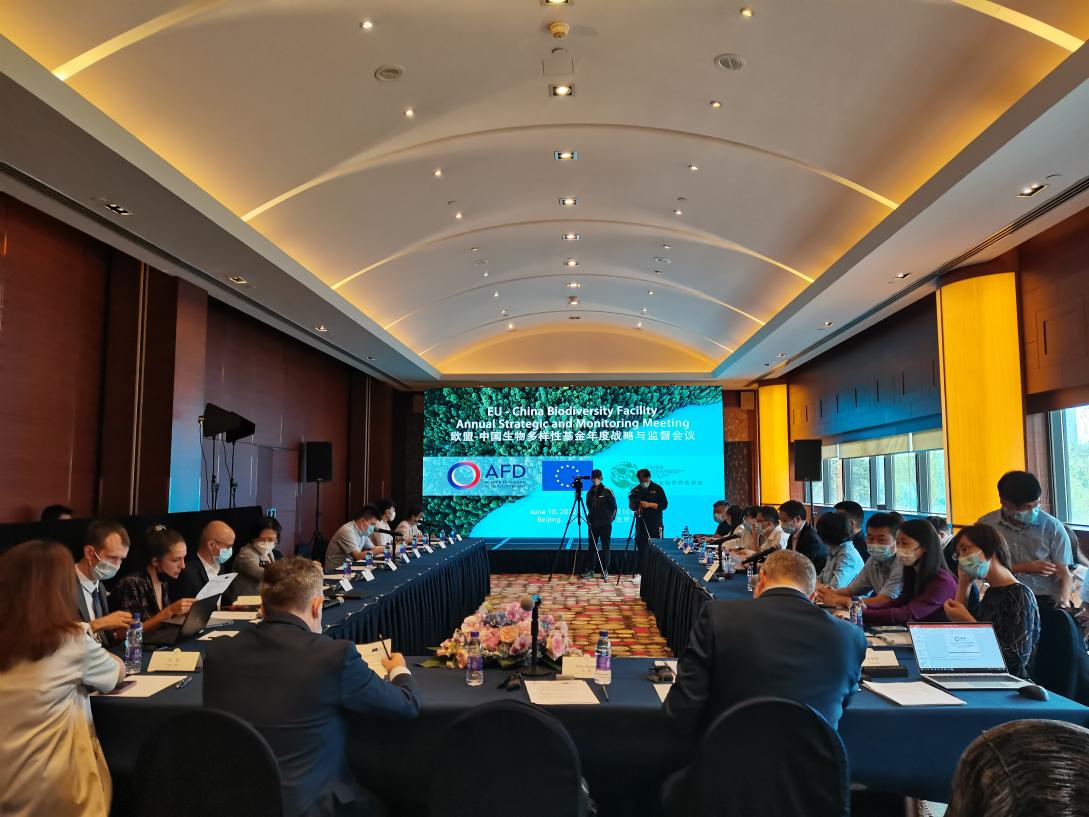 The 2022 Annual Strategic and Monitoring Meeting (ASMM) of China Biodiversity Facility (CBF) was held in Beijing on 10 June 2022, with participation of key stakeholders including European Union Delegation to China (EUD), Agence Française de Développement (AFD), Chinese Ministry of Finance (MOF), Ministry of Natural Resources (MNR), and National Forestry and Grassland Administration (NFGA), in order to jointly review the progress made during the 2nd year of CBF implementation (July 2021 to June 2022) and provide strategic guidance for CBF work in the coming year. The workshop also gathered representatives from international organizations, development banks and think tanks working on biodiversity issues, to promote exchanges and synergies on sectorial policy priorities in China.

Mr. Pierre-Yves Lucas, Team Leader of Cooperation Section of the EUD welcomed all participants. He expressed thanks to the Chinese ministries, all the task forces and stakeholders that have supported CBF for its smooth implementation. “The CBF will bring added-value from European expertise and best models to China’s biodiversity conservation policies and practices. I hope today’s event can also help us identify opportunities to explore synergies and strengthen our joint efforts with other donors.”

The CBF funds, granted by the European Union (EU) and implemented by AFD, contribute to enhancing the quality and maximizing the biodiversity and climate benefits of 8 to 10 projects financed by AFD loans over the period of 2020-2028. It aims to contribute to the improvement and operationalization of public policies for the conservation of biodiversity in China through the implementation of replicable, high-impact and innovative projects. Six priority themes have been jointly identified together with the Chinese ministries, including biodiversity financing, ocean and coastline management, protected area reform, ecological restoration, urban biodiversity, and implementation of CBD post 2020 framework, on which targeted public policies dialogue activities are co-financed by CBF.

As of today, the AFD Board has approved four loan projects in Zhejiang, Yunnan, Hubei and Fujian provinces while Grant Framework Agreement with Chinese counterpart has been finalized and on the processing for signature. The policy dialogue activities on biodiversity financing and mainstreaming, reform of protected areas as well as ocean/coastal area management were launched successfully and on significant progress. During the workshop, task forces implementing various policy dialogue activities under the priority themes reported their progress and reflections in past year and mapped out work plans for the coming year respectively.

Representatives from World Bank, ADB, UNEP, EIB, KfW and GIZ introduced their respective work on biodiversity conservation including green finance, ecosystem restoration and sustainable agriculture as well as ecosystem services data. They highly acknowledged the CBF’s contribution to the nature and hope to make good use of comparative advantages and actively explore potential partnership to enhance the coordination and cooperation among different institutions and agencies on those identified priorities.

Ms. WU Jun, DDG Department of International Cooperation of MNR mentioned that the MNR will continue its support towards implementation of the CBF. She suggested that the Facility should pay attention to grasp integration and coordination between policy and practices, especially on better integration with the loan projects in Fujian, Hainan and Guangxi. It should give full play to the significance of public policy dialogue activities in guiding practices on the ground.

“I am convinced that CBF is now on the good track to deliver what it has been designed for, that is to say to support and enhance the dialogue between Europe and China on this common objective of preserving the biological diversity.” Mr. Yann Martres, Regional Director of AFD addressed.