17.01.2023 Press and information team of the Delegation to CHINA 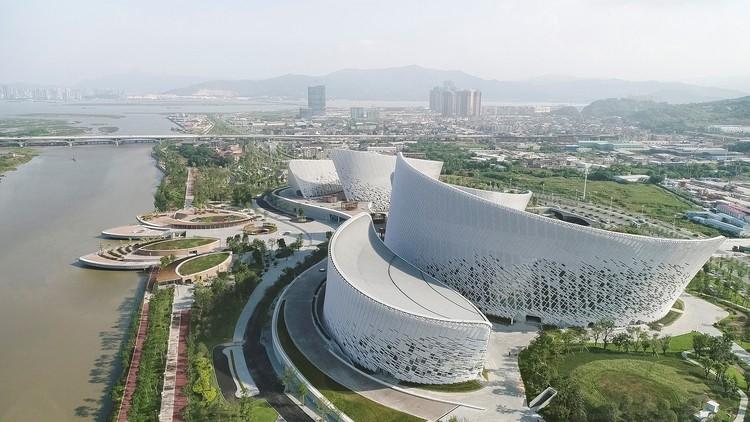 Jasmine is the city flower of Fuzhou, the capital city of Fujian Province. Therefore, it is a pride to the local citizen when a gigantic "jasmine flower" - the Fuzhou Strait Culture and Art Centre, the latest landmark of the city lying at the bank of Minjiang River, was completed in 2018.

The 153,000-sqm Centre takes inspiration from the petals of a white jasmine flower which is manifested in the formal language and colour of the architecture. The five jasmine petal venues — opera house (1,600 seats), concert hall (1,000 seats), multi-functional theatre, art exhibition hall and cinema centre — are linked by a Cultural Concourse and a large roof terrace.

In 2013, the Fuzhou Government hosted an international invited competition for the Centre with the goal of strengthening the cultural image of the city and the Mawei New Town development area. The Helsinki and Shanghai based PES-Architects won the competition.

The original design concept of PES-Architects was based on the notion of the building complex as sailboats. This strongly linked to the overall concept of the project and Fuzhou which was historically placed in the context of the waterway silk-road trade connection from the China to the world. Nevertheless, the district government leadership had a sharp eye seeing an apparent link in the building’s white architecture and the jasmine flower. This aesthetic element was highlighted as the design was further finetuned.

Sustainability is one of the important criteria of the design. The large use of locally produced ceramics is impactful in this project. This significantly reduced the need for heavy, long and complicated building part production routes during the construction phase which is typical in projects of this scale. It is also a showcase of how local techniques of terracotta and ceramics, with modern know-how, can be used in contemporary large-scale construction, reinvigorating techniques that have been in use in China for centuries.

The artistic ceramic interior was designed for two main auditoriums according to acoustical demands, using the legendary “China White” material and new technology. All façades are clad with white ceramic tiles and louvres, while both the opera hall and concert hall showcase this cultural material in innovative and creative ways in the acoustic wall surface.

In addition to ceramics, the extensive use of locally planted massive bamboo is prominent in the Centre. Bamboo, highly regarded as a sustainable material with a strong Chinese flavour, has been used in the foyers and the multifunction hall as acoustic surfaces. Integrating bamboo into the design has delivered superb functional, aesthetics as well as environmental benefits.

Additionally, in order to achieve a holistic green and ecological design concept, the Centre has adopted a number of eco-friendly touches in which its use of geothermal energy is particularly worth mentioning. It harvests geothermal energy from the Minjiang River nearby and this is a relatively novel practice in China. The other eco-friendly exercises of the Centre include natural ventilation, passive shading, rainwater collection and a variety of water saving solutions.

The Centre has won dozens of domestic and international awards including the prestigious China Civil Engineering Zhan Tianyou award. The project team contributed the success of this Centre to the joint efforts and expertise of professionals from Finland, Germany, France, China and Chinese Taiwan.

The Centre is now a truly public architecture for the people. On top of the cultural offerings provided inside the buildings, local citizens have taken it as part of their city and people of all ages coming there together to spend time.