Large attendance at environmental academic forum #ForOurPlanet, organised by the EU in Manabí, about protection of the oceans

28.11.2022 Press and information team of the Delegation to ECUADOR

With this event the EU-ECU Del, its Member States and the European Investment Bank (EIB), as Team Europe, together with the Universidad Laica Eloy Alfaro de Manabí (ULEAM) sought to raise environmental awareness of students to promote the protection of our oceans and biodiversity in the framework of the #ForOurPlanet campaign 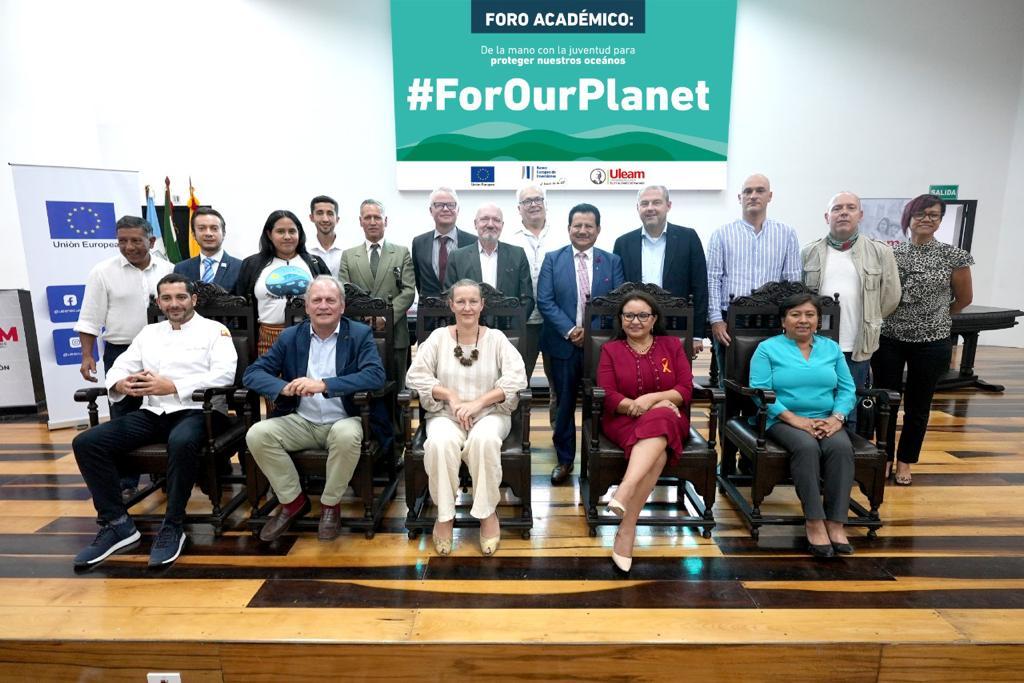 The European Union in Ecuador, together with its Member States and the European Investment Bank, as “Team Europe” organised the Academic Forum: “Hand in hand with the youth to protect our oceans”. This activity could be organised thanks to the invaluable support of the Universidad Laica Eloy Alfaro of Manabí (ULEAM) in the framework of the initiative sparked by EU Delegations worldwide called “EUBeachCleanup”, to raise awareness about the environment and push for actions that care for and protect our oceans.

The academic meeting took place as a physical event in the Auditorium Parainfo Alfonso Aguilar of the ULEAM University and attracted 700 in-person participants as well as gathered a few hundreds more online.

The first part of the event offered a panel discussion about the importance of the protection of ecosystems and the threats that the oceans face. In line with that, Wini Schmidt, head of technical assistance of the project PER – European Investment Bank (EIB), focused his intervention on the litter to be found in the sea, a growing global challenge posing a problem that has an alarming impact on marine wildlife, biodiversity and human health. “It is imperative to act immediately and create a more environmentally-conscious future. For this reason, the EIB seeks to support projects that consider environmentally-friendly measures, applying social and environmental safeguards, and oriented towards a green economy in favour of sustainable initiatives”, said Schmidt.

In the second phase, companies presented practical examples of green and inclusive initiatives, which they have launched and that promote development in harmony con nature. As speakers appeared: Jorge Moreira, General Manager of Bureo, with its program “Net Positiva”, which introduces turning disused fishing nets into innovative products; and the chef Rodrigo Pacheco, Goodwill Ambassador of the Food and Agriculture Organisation of the UN, who explained his contribution to the promotion of tourism and food in harmony with nature.

The event closed off with genera conclusions and a call-to-action, so that more young people join the effort of generating initiatives that help to protect our oceans. “The planet needs immediate actions to curb climate change and protect biodiversity. Young people are the leaders of the future for this change of mentality; therefore, their participation is crucial to save this planet. We should continue with hope and determination to obtain tangible results”, demanded Charles-Michel Geurts, Ambassador of the European Union in Ecuador, during his discourse.

With this event the EU-ECU Del, its Member States and the European Investment Bank (EIB), as Team Europe, together with the Universidad Laica Eloy Alfaro de Manabí (ULEAM) sought to raise environmental awareness of students to promote the protection of our oceans and biodiversity in the framework of the #ForOurPlanet campaign