17.05.2022 Press and information team of the Delegation to ICELAND

We celebrated Europe day on the 6th of May with a concert in Reykjavík. We were pleased to welcome over 300 guests to a concert by popular Icelandic artists. H.E. Þórdís Kolbrún Reykfjörð Gylfadóttir, Minister for Foreign Affairs of Iceland, was an honorary guest. 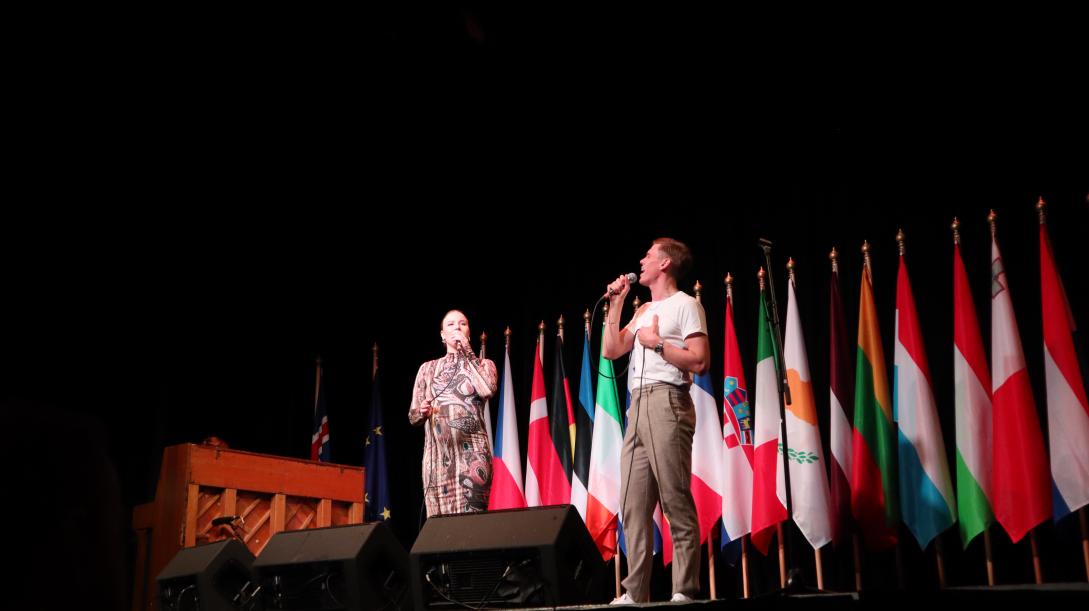 The EU Delegation to Iceland celebrated Europe day on the 6th of May with a concert in Gamla Bíó in Reykjavík. We were pleased to welcome close to a hundred guests to a reception, and an audience of over 300 to a concert by popular Icelandic artists GDRN and Jón Jónsson. H.E. Þórdís Kolbrún Reykfjörð Gylfadóttir, Minister for Foreign Affairs of Iceland, attended as a guest of honour and delivered an opening speech alongside the Ambassador of the European Union to Iceland Lucie Samcová-Hall Allen (transcript below).

Speech by Lucie Samcová-Hall Allen the Ambassador of the European Union to Iceland:

Europe Day is a special occasion for us. Let me tell you why.

To do that, I’ll need you to travel back in time with me.

The year is 1950. Only five years after the end of the Second World War, the most brutal conflict the continent has ever seen. Its scars are still open. In the walls of bombarded cities, and in the hearts of millions of families who lost their loved ones.

It’s obvious that long term peace will not be guaranteed without trust. But how can you build trust between nations who fought one another just a few years ago? Robert Schuman was one of the politicians asking himself this very question.

And, in May 1950, he made a bold proposal  a way forward. The creation of a community of European nations who would share their vital resources.

"Europe will not be made all at once, or according to a single plan”, he said. It will be built through concrete achievements which first create solidarity."

This was the nucleus of the European Union as we know it today. Over seven decades, we have grown from a group of six to a block of twenty-seven. Today, the European Union is home to 450 million citizens, and stretches from Helsinki in the north to Nicosia in the south; from Portugal on our western coast to Cyprus on the EU’s eastern flank. We have developed into one of the largest global economies. Beyond our own borders, the Union is a reliable ally to our partners, a responsible actor on the multilateral stage, and the world’s largest donor of development assistance to countries less fortunate than us.

But the European Union can not be described on the basis of figures and statistics. It is the result of tireless efforts by determined men and women in pursuit of an ideal: a Europe that strongly promotes its fundamental values: the personal dignity of every human being, freedom, democracy and the rule of law.

It aims to secure the most precious of goods: peace, democracy and prosperity, which are most valued when put at risk. I did not imagine that I would see war on the European continent in my lifetime. But this is what we woke up to this February, when Ukraine was aggressively attacked by its neighbour. Once again, we hear blasts from cities and open our doors to refugees who fled their homes looking for safety. This is why our project of peace and security needs to live on.

But we can’t do this alone. We are only as strong as our partnerships. I’m immensely proud that for almost two years now, I have had the honour of representing the European Union in Iceland – a beautiful country which is among our closest partners, and most important allies.

The EU and Iceland have a deep friendship, based on the close links between our citizens. Around 40,000 EU citizens live in Iceland today - more than 10% of the country’s population. And thousands of Icelanders live, work and study in the EU. These figures alone illustrate our deep interconnection. I believe we also share a vision – whether it comes to climate change, the protection of the Arctic, and other issues that will shape our world in the years to come, the EU and Iceland see eye-to-eye.

I could write pages and pages about the benefits of free movement of persons; about the economic importance of the single market; about the fantastic cooperation that exists between our researchers. But once again, I believe that the main value of our partnership lies elsewhere. In shared values. We both believe in human rights and fundamental freedoms. We believe in equality. We both believe in democracy over tyranny. And not only we believe in them, but we are also ready to work for them, day after day, in Europe and across the globe.

I would like to thank Iceland for standing by our side.

With tensions rising at our eastern borders, unity remains our strength