09.09.2022
Luxembourg/ Jakarta
Press and information team of the Delegation to INDONESIA and BRUNEI DARUSSALAM 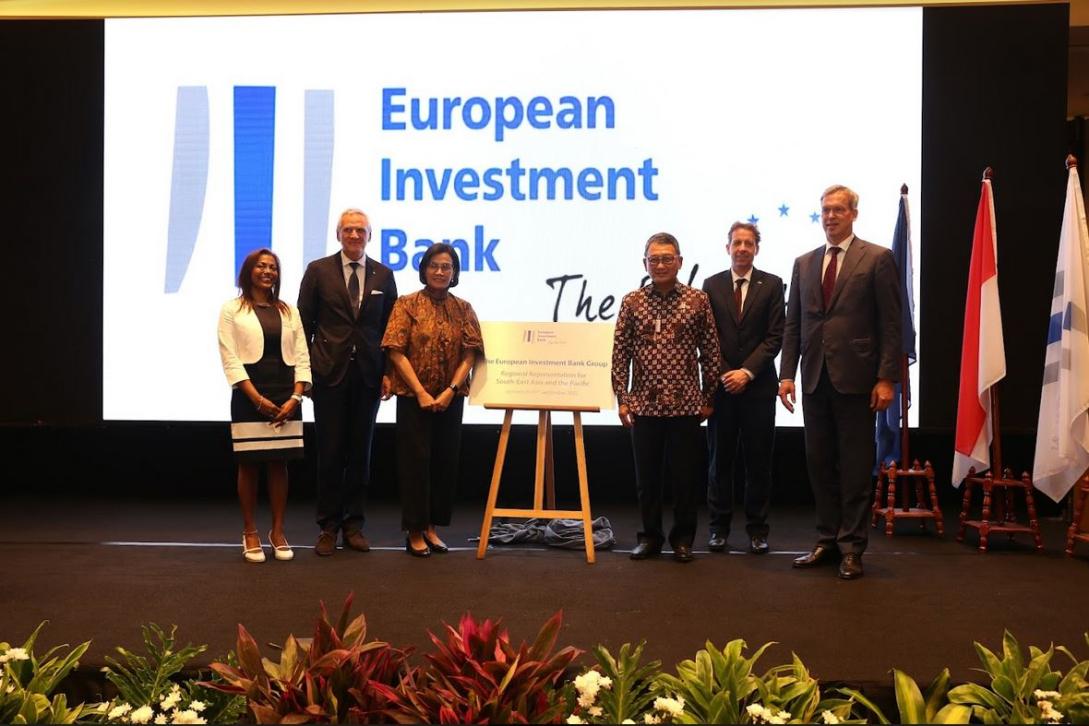 Team Europe in Indonesia: EIB strengthens engagement in South-East Asia and the Pacific with a new Regional Representation Office in Jakarta

The European Investment Bank, the Bank of the European Union (EU), and the world`s largest multilateral lender, opened its Regional Representation Office for South-East Asia and the Pacific in Jakarta, Indonesia.  Finance Minister of the Republic of Indonesia, Sri Mulyani Indrawati joined EIB Vice-President Kris Peeters, and EU Ambassadors to Indonesia, Vincent Piket, and ASEAN Igor Driesmans to formally open the EIB’s new EIB office today; the EIB Office will be located at the same premises as the EU Delegation to Indonesia and EU Delegation to ASEAN, with a regional representation office in Suva, Fiji, covering the Pacific.

EIB Office in Jakarta will work to ensure that the development loans granted in cooperation with our financial partners accelerate growth, make rural areas more prosperous, transform cities into innovation hubs and strengthen economies.  The EIB Jakarta Office follows the decision from the EIB shareholders - 27 EU Member States - to create its dedicated development branch, the EIB Global and strengthen international presence of the bank.

Kris Peeters, Vice President of the EIB, who is in charge of Bank operations in South-East Asia said: “I am delighted to open our new regional representation office in Jakarta. It reinforces Team Europe presence in Indonesia, South-East Asia, and the Pacific. The EIB office will contribute to fostering new, multi-million investment opportunities in projects which help the region tackle its most urgent investment needs, all in a green, sustainable way. In Indonesia, alone, we are ready to invest up to EUR 1 billion in projects each year, and I invite the country`s public and private sector to consider our invitation to partner on the ambitious green and sustainable development of the country and its economy. We want to establish ourselves as a reliable partner of Indonesia and South-East Asia and help ensuring for the country and the region to grow and develop in a way that is green, sustainable and empowering, limiting the effects of climate change, and strengthening the national independence of EU partner countries.”

Markus Berndt, Deputy General Manager of EIB Global said: “EIB has the ambition to reinforce our position and the position of the EU as a reliable partner for Indonesia and South-East Asia in tackling some of the most urgent issues of today. EIB Global will work with partner countries in the region to unlock green, sustainable and empowering grow and development. We want to limit the effects of climate change while unlocking faster social and economic development, and finally strengthen the national independence of our partner countries. EIB Global will be one of the main tools to achieve this ambitious goal and I look forward to Jakarta Office contribution.”

EU Ambassador to Indonesia Vincent Piket said: “With EIB’s permanent presence in Jakarta, we can do more to strengthen EU-Indonesia partnership on climate action, the energy transition and on sustainable urban development. EIB’s permanent presence on the ground will ensure proximity and an increased EIB operational delivery capability, as well as closer institutional ties with national authorities. We hope that this will bring our close cooperation to the next level.”

EU Ambassador to ASEAN Igor Driesmans said: “The EIB is a key strategic partner to advance the Global Gateway – an EU initiative to narrow the investment gap and help tackle the most pressing global challenges, from fighting climate change, to improving health systems, and boosting competitiveness and security of global supply chains. With the opening of an EIB Regional Office in Jakarta, this will ensure increased cooperation between the EU, EIB and ASEAN partners.”

Sunita Lukkhoo, new Head of the EIB Regional Representation for South-East Asia and the Pacific said: “The Office is a new page for the bank’s cooperation with Indonesian, Asian, Team Europe and global partners. The EIB is bringing to South-East Asia more affordable long-term financing as well as our advisory support for project preparation. The Bank has a unique ability to blend our own finances with EU funds and investment initiatives such as the Global Gateway for the maximal benefit of the final users – the citizens of South-East Asia.  EIB will be able to better respond to private and public investment priorities and build on its six decades of best-practice engagement on projects world-wide. I look forward connecting our public and private sector from the region with the EU and the EIB, and contribute towards more cooperation between the region and the European Union.“

The EIB Jakarta Office was formally launched in Indonesia in the presence of government, business and banking leaders, civil society, and the diplomatic corps.

The European Investment Bank is the world’s largest international public bank, and the new Regional Representation Office in Jakarta will further accelerate EIB technical and financial support for high-impact investment across the region.  Regional EIB Hubs and regional representation offices will make it easier for projects across the country and South-East Asia to secure financing and offer direct support for project promoters.

To date the EIB has been engaged and invested in energy, urban transport, climate action, rural infrastructure, urban development and transport projects in Indonesia, Cambodia, Laos, Vietnam, and the Philippines and invested over EUR 625 million in the last ten years alone.

In the coming months new Jakarta Office will expand and increase its expertise on climate action, innovation, and digital investment, in close cooperation with its South-East Asia and the Pacific based partners and Team Europe.

EIB Global will also ensure that countries such as Indonesia benefit from financing initiatives introduced by the EU such as the European Green Deal and the EU Global Gateway. These programmes will improve EU partnership with countries and provide long-term sustainable funding for connectivity projects, accelerate climate action and digitalization, and strengthen healthcare systems, education and research.

EIB Global brings all EIB activities beyond the EU together into a single entity to amplify the impact of everything that the Bank does. EIB Global allows the Bank to use its expertise and resources to act on the ground exactly where it is needed, in close cooperation with Team Europe and all our partners, development finance institutions and civil society.

Fully in line with the Paris Agreement and the Sustainable Development Goals of the United Nations, the aim of the EIB Global is to finance projects for adapting to climate change while mitigating its consequences, and to set up sustainable and innovative solutions for climate action.

Specific financial tools and facilities providing support and assistance will continue to be rolled out through EIB Global to shore up riskier projects around the world, particularly in the field of climate action, and ensure that the most vulnerable populations have access to water, electricity and healthcare.

Women are also a key focus of our action, as we seek to empower them to become more self-reliant and participate in society and business on an equal footing.