02.06.2022 Press and information team of the EU Office/EU Special Representative in Kosovo

In 2016, Arta Ibishi-Çitaku came across a video about people who are engaged in “plogging” - essentially jogging and picking up garbage.

This seemingly low-impact activity had a high impact on Arta and her entire hometown, Mitrovica. It inspired her to become an environmental activist and start organising clean-up actions. 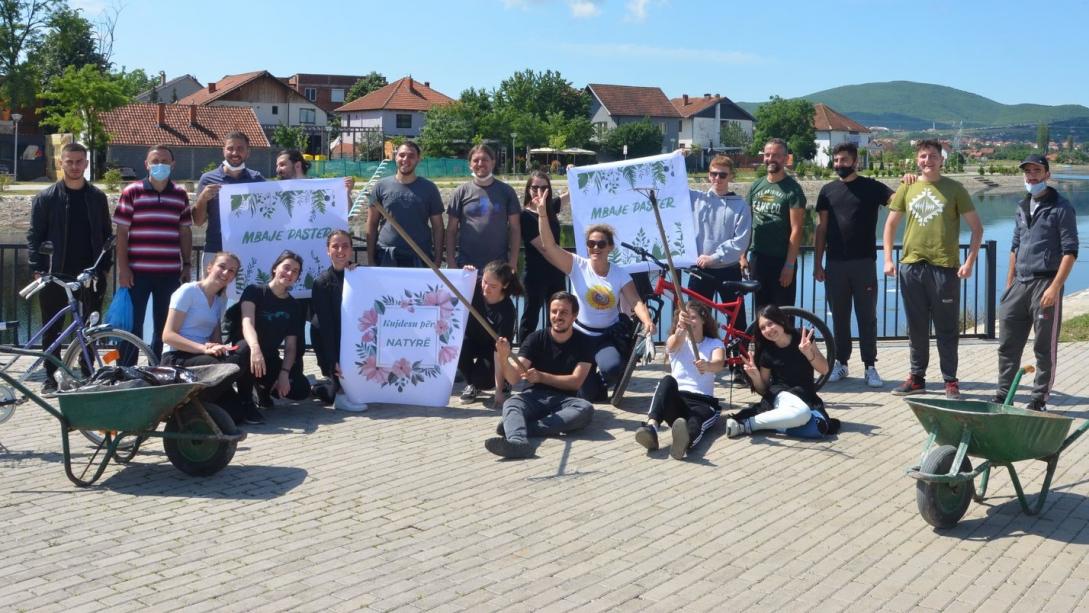 “We are facing many environmental challenges in Kosovo, including air, water and soil pollution, but I believe that this can change and that we can protect our environment if we try,” says Arta. Leading by example, she rides a bicycle in the city and uses reusable bags only.

Already in 2016, Arta started organising clean-up actions around town. But in 2020, she took her activism a step further by establishing an informal group called Mitrovica Environmentalist (ME), which now gathers 150 permanent activists, young environment protection professionals, and many more volunteers.

“It is both unbelievable and admirable that whenever we issue a call for action the response is there, 50 people on average. Our clean-up activities gather children, teenagers, and also elderlies, so we get to have all generations working together to protect the mother Earth,” she says explaining that they invite volunteers via Facebook and that such a system works very well.

ME's activities in addition to clean-up actions, also include tree planting, advocacy, and promotion of recycling and energy saving. But, like many other informal groups, they too struggle with funding.

“Every euro matters,” says Arta. “With every action we take, we need to secure funding for gloves, garbage bags, seedlings, fertiliser, and sometimes more shovels and other gardening equipment. In addition, providing a small treat for volunteers at the end of the action also means a lot, so any funding we get supports our cause and makes our work feasible.” The recent EU in Kosovo’s funding of a tree-planting and clean-up action along the Ibar river banks in Mitrovica South on the occasion of the International Earth Day did just that.

“Not just the funding, but the participation of the EU Ambassador Szunyog and Mayor Bedri Hamza in our activities was important, as it showed that we have their support,” says Arta.

Mitrovica Environmentalist is not the only group setting the standard for activism in Mitrovica South. Their partner, NGO named Reconciliation Empowering Communities - `REC Kosova`, actively works on environmental protection and advocates for the prevention of the construction of mini and small hydro plants and illegal landfills.

“One of our activities is advocating with municipal and national authorities to maintain and regulate the regional landfill, eliminate small illegal landfills, and impose mandatory fines for violators of the Waste Law,” says Besnik and Arta concurs: “Those who create illegal dumpsites must pay fines!”

Arta and Besnik are the faces of the environmental protection in Mitrovica South and symbols of hope for a greener future. They are happy that, every day, more and more people are joining their activities.

"We will continue raising awareness and playing an active role in changing attitudes of people so that polluting becomes a big no,” says Arta.

“We will also work on creating new habits, whereby taking part in environmental actions becomes a regular thing like going shopping or doing other fun stuff,” she adds, and Besnik concludes with a call for action: “Protecting the environment from pollution and increasing green spaces is a civic obligation. Let's make Kosovo a better place for the new generations!"

As those two continue their struggle to clean up Mitrovica South and make it greener and safer for all, the EU will continue supporting activists and relevant institutions in implementing the Green Agenda for the Western Balkans. Since 2015, it invested over EUR 100 million in the protection of the environment, including by improving the energy infrastructure, which has a significant impact on the environment.

‘The will of the Kosovo youth to reconcile made the project a success story’ – Kaltrina Shala, Project Manager at Kosovo Coalition for Reconciliation