Proton – an example of a successful, sustainable, and inclusive entrepreneurship

02.11.2022 Press and information team of the EU Office/EU Special Representative in Kosovo

High rates of unemployment continue to be one of Kosovo’s main barriers when it comes to economic development. According to the Kosovo Agency of Statistics, the labor force participation in Kosovo is one of the lowest in the region, with an average of 39 percent participation rate over the last five years (Employment & Labor Market Analysis – Riinvest). Unemployment rates are especially high among women and youth. 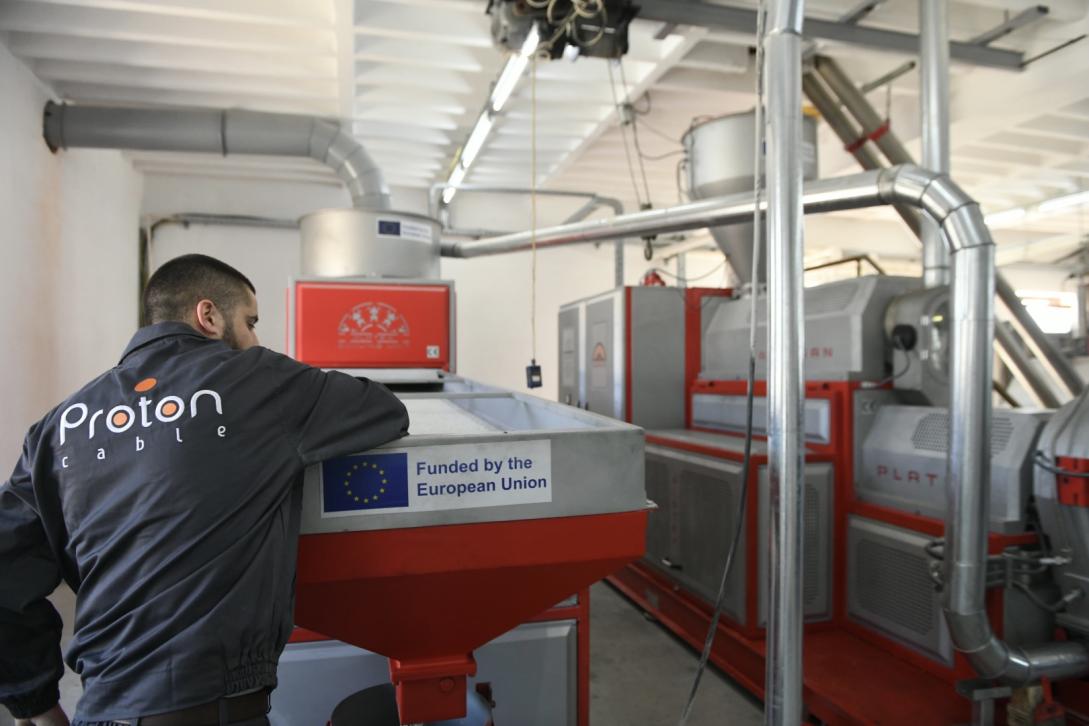 To foster employment, increase social inclusion, and to create sustainable models of enterprises, in 2020 the European Union in Kosovo launched the project ‘Fostering employment of disadvantaged groups and increasing global competitiveness of the electrical installation industry in Kosovo in line with the principles of sustainable and social inclusive development.’ ‘Proton,’ the leading cable producer company in Kosovo, based in Prizren, was the main beneficiary of the project, receiving modern automated machines required for the production of Sheathing Compound and Halogen Free Cables.

According to Besim Dida, Marketing Manager at Proton Cable Factory, the assistance received from the EU made Proton the first company in the region to produce Halogen Free Cables. “The Halogen Free Cables that we are now producing, meet the EU standards of safety and are on high demand in European markets. The cables are used in various buildings such as schools, hospitals, airports, and others, and they prevent accidents caused by burning cables” – says Dida. According to him, the grant received by the EU was a huge boost to their company, since they started exporting in the EU, and only in 2022 their sales increased by 500%, resulting in 2.5 million euros in sales, in local, regional, and European markets.

But the grant received by the EU did not only boost the company’s sales, but increased employment and the capacities of 129 persons, including non-majority communities. Thanks to the support received 129 people were trained, of whom 18 found immediate employment in Proton Cable Factory. 50 of them completed internships, while the remaining 64 increased their skills and found jobs in other companies.

Serhat Morina who comes from the Turk community living in Kosovo, was one of the participants in the training on electrical installations and the use of Halogen-Free cables. He is now employed at the Proton Cable Factory, and says that he is very happy with the skills gained and the employment opportunity.

“The training helped me a lot to increase my skills, while the employment opportunity allowed me to apply them in a working environment with modern equipment. I feel happy and empowered to gain and apply these skills, which I think will have a great impact in my future.” – concludes Morina.

Another employee who has found employment in the company is Dilek Dadihak, who works as an administrator.

“Coming from the Turkish community, I had some doubts in the beginning when I first started working in the company. But it turned out that my doubts were wrong, since all my colleagues welcomed me very well, and they continue to support me in advancing my working skills. Also, thanks to being employed in the company, I have started learning and practicing the Albanian language, and this also is a great step for my professional and personal growth” – says Dadihak.

Since 2013, the European Union in Kosovo has invested over 8 million euros to help create jobs in Kosovo. EU will continue to support projects that create new jobs and foster Kosovo’s economic development.