17.11.2022 Press and information team of the Delegation to Mauritius and Seychelles

The Smart Agriculture Project has been supported in Mauritius since June 2018 to assist planters in adopting more climate smart agriculture practices, reducing the use of chemicals to a reasonable level while proposing sustainable alternatives to be economically viable in the long run. The project has already achieved the following objectives :

This will contribute to less polluted soils, healthier agricultural products for consumers and a more resilient agriculture system as well as enhanced food security.

Agriculture contributes towards climate change through greenhouse gas emissions. As a response to reducing GHG, the Smart Agriculture project will aim to adopt climate smart agriculture practices and thus contributes to to Mauritius Nationally Determined Contribution presented before the UNFCC. Besides, it is in line with the EU Green Deal and ‘Farm to Fork’ and  Biodiversity’ strategies. 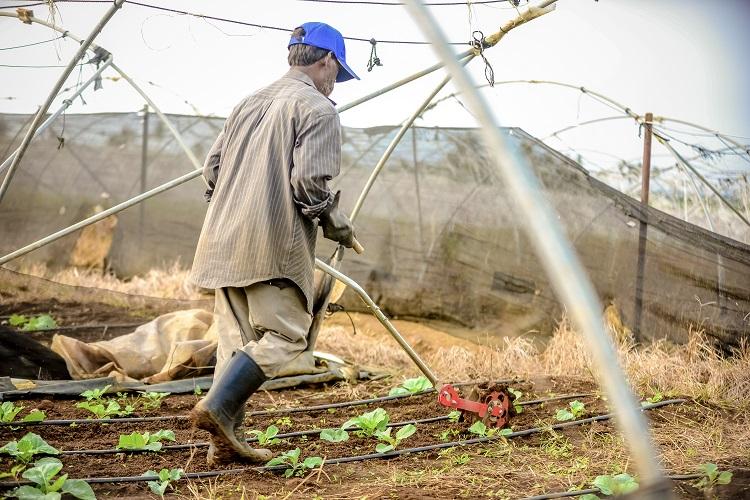 The increasing general perception of excessive use of pesticides is now becoming an issue which more and more public and consumers are being aware of, and environmental organizations are trying to understand its scope and be solution providers.

In this industrialized world geared towards quick results, the use of pesticides to control pests like fungus, harmful insects, animals or even weeds, seem to be the norm. However, in response to this world awareness, alternatives to chemicals are slowly being introduced in local agricultural practices. As the sole use of chemicals is a serious issue when pesticides become the only solution, whereby they are used excessively to a point where they become a threat to biodiversity and human health. These products might be helpful to limit any excessive damage of crops when attacked, but pesticides are dangerous chemicals. They are used to poison and kill pests. Hence, uncontrolled use of those products can lead to the contamination of the soil, ground water and air and threaten our biodiversity and ecosystem.

Production of agricultural products may be the sole source of revenue for many enterprises and individuals. We must, also, bear in mind that Mauritius’ economy partly depends on agricultural activities. With the recent crisis, food security and more importantly, our food sovereignty, is more and more coined as a weapon to stay resilient during economic turmoil.

The Smart Agriculture project as an answer

The Smart Agriculture project was set up to bring to light good practices that connect and harmonize food crop production with natural biodiversity.

The Smart Agriculture project was initiated by the Mauritius Chamber of Agriculture in 2015, along with the support of financing partners such as l’Agence Francaise de Développement, the European Union (as from mid-2018), Région Réunion and France Volontaires, the Mauritius Research and Innovation Council (MRIC), the Food and Agricultural Research and Extension Institute (FAREI) and the Centre de cooperation International en Recherche Agronomique pour le Développement (CIRAD) in Reunion Island.  The project’s main objective is to have the growers change their general agricultural practices and the general ecosystem of their productive farm by talking in priority the necessity to reduce the use of chemicals to a reasonable level while proposing sustainable alternatives to be economically viable in the long run. Sustainable use of pesticides put less pressure on the environment and the ecosystem.

The Smart Agriculture project is now working with a sample of 13 growers (8 small planters and 5 corporates) having dedicated some 20ha of their land towards implementing innovative agricultural practices which, for some growers, they have already replicated on the rest of their farm. The Smart Agriculture team accompanies the planters in changing their conventional practices to a sustainable one through the introduction of agroecological principles in their operations. Agroecological practices help in reducing the significant number of pesticides used in various ways.

After having applied those principles, all the beneficiaries have noted similar productivity levels compared to conventional practices.

Smart Agriculture’s actions are both theoretical and practical. Growers are made aware and trained while they benefit from equipment from the project to work-on and validate the proposed transition on the “smart plot”. They apply the principles of agroecology in collaboration and the advice of the Smart Agriculture project team. The growers do not operate these ‘smart plots’ as part of an experiment only, as the products grown are also sold. Hence, Smart Agriculture is all about showing that there are viable and rational alternatives to chemicals. We reiterate that it is not about the complete elimination of the chemicals (which would have been perfect). The transition to full elimination of chemicals takes mastering of all aspects of the complex biodiversity of the ecosystem. Therefore, it is why we initially propose the reduction of those products with incentives for the project to limit the risks while providing training to increase each grower’s knowledge.

Smart Agriculture is about the reduction of their use to a reasonable level, which is more economically feasible for the growers. And such growers having developed sustainable agricultural practices may eventually eliminate chemical fully from their plantation.

Good practices established throughout the project:

Fruit-flies and Diamond Black Moth (DBM) are the two most common and impactful pests found on the plots dedicated to the Smart Agriculture project and they are also of national importance. The DBM attacks mainly the cabbage whereas the fruit-flies attacks cucumber and fruits.

The project has proposed a combination of techniques on the ‘smart plots’ to replace the use of chemicals while reducing the impact of the pests on the production. Techniques such as trap crops, pheromones or augmentariums linked to sanitation.

Trap crops (push-pull plants) are planted in the fields to attract or repulse the pests and beneficial insects, developing the biodiversity around the crop for natural ecosystem management. Females’ pheromones are used to lure males into traps and naturally preventing the reproduction cycle of the moth.

The augmentarium (picture) is a tent-like structure in which infected fruits and vegetables collected from the field are stored. This is the sanitation process. A special mesh size net is placed on top of the structure as an opening for the sunlight while being a barrier for the adult fruit-flies that have hatched inside but leaving passage for the parasitoides of the fruit-flies to get out and attack other fruit-flies. This action reduces the number of fruit-flies and the infestation of the field.

As a verification process of our proposals, an integrated pest management against the Diamond Black Moth was conducted at La Laura from 15 May 2021 till 20 June 2021. While implementing the various agroecological techniques, it was recorded a reduction in the use of insecticides from 6 chemical applications to 3 applications of biopesticides throughout the whole cycle.

The process was repeated on plots situated at: Plaine Sophie and La Laura (centre of the Island), Mapou (north of the Island), Senneville and Bel Ombre (south of the Island) against fruit-flies using various. The number of applications of insecticides on cucumber went from 12 to 3 during the whole cycle and the crop yield loss decreased from 70% to 20%.

There are additional efforts from the planters to change their practices and many other planters are expressing their wish to join the project.

In 2020, the Jhamna family was the last of the 13 planters to join the Smart Agriculture project. Madhvi and her son Bimal started their agroecological journey on a one-acre plot in Moka.

Their agricultural activity was mainly focused on cauliflower, cabbages, and lettuce, pak choy, coriander, and chive. Gradually and through technical and financial assistance of the project, the Jhamna family fully implemented the measures prescribed. They reduced their chemical use to practically nil and added another acre under the project. This additional acre is under cabbage, pak choy and lettuce cultivation. They maintained their level of production along with the elimination of chemicals.

As Bimal Jhamna pointed out, “a profitable alternative way of growing food crops is possible”. Mrs Jhamna even stated that the shelf life of the products from smart agriculture plots is much longer than those produced from conventional agriculture. She is now selling her products to restaurants and vegetable sellers who want to promote sustainable food production.

After nearly five years, for some of the beneficiaries of the project, the growers are accustomed to the practices and almost all of them are operating their parcels without disruption. Some even match the output of growers operating in a “conventional” way.

The Mauritius Chamber of Agriculture is now planning to move a step further by looking into the possibility of promoting differently the vegetables produced from those farmers that have proven to use a reduced amount of chemicals. This will create value addition to their risk to produce differently and reward the hard work of these farmers and the Smart Agriculture project will accompany more growers into this transition phase. As at now, some planters sell their products directly to the consumers while others send their vegetables to the wholesale market where they are mixed with other products and sold to individual traders.

The Smart Agriculture project implemented by the Mauritius Chamber for Agriculture is supported under the EU Global Climate Change Alliance initiative from June 2018 to August 2023.

Of Mice and Foxes : A Czech animation film delights the Mauritian public