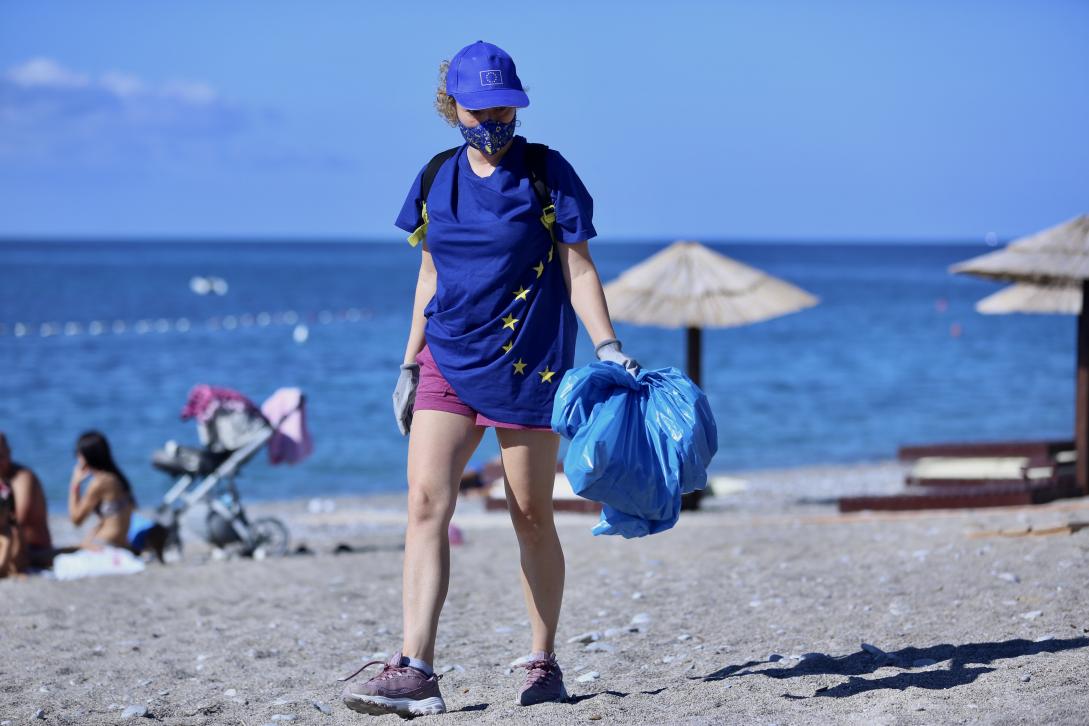 For the fifth time in a row, under the auspices of the EU Delegation to Montenegro, the NGO Zero Waste, in cooperation with a large number of local NGOs and numerous partners, organised a clean-up action dedicated to the European and International Coastal Cleaning Day. Over 300 volunteers collected waste from 19 locations in 15 Montenegrin cities.

The staff of the Delegation of the European Union to Montenegro joined the action by cleaning Buljarica Beach in Budva. The message of the action itself is to draw attention to the urgent need to protect rivers, seas and oceans. About 95% of waste that ends up in rivers, seas and oceans ends up on the seabed which destroys flora and fauna. Only 5% of waste ends up on the shores. This means that the waste we collect from the shores is just the tip of the iceberg, said Sasa Palibrk from the EU Info Centre. “The real solution to the problem is to stop using disposable plastic, which is the biggest enemy of the seas. In Europe, 80-85% of beach waste is plastic. The EU has taken concrete steps to ban single use plastic and to force big companies to limit their plastic production and consumption. We expect Montenegro to follow suit. In just a few days, Montenegro will mark its 30th anniversary as an ecological state. It is high time to turn words into deeds and reduce single use plastic, as well as to make waste disposal and treatment more efficient,” said Palibrk.

The cleaning action was held in 19 locations in 15 municipalities: Podgorica, Danilovgrad, Niksic, Zabljak, Mojkovac, Pljevlja, Bijelo Polje, Berane, Gusinje, Herceg Novi, Tivat, Kotor, Budva, Bar and Ulcinj. In addition to cleaning the waste, it is also audited every year, and each time the results are very similar. More than half of the waste is disposable bottles. The biggest polluters are global, but also local companies that produce beverages in disposable packaging. "Every year, over 65% of the collected waste consists of plastic bottles and that is the biggest problem we are focused on that this year. Plastic bottles, glass bottles and cans will be audited. Also, with this action we want to raise people's awareness to reduce the use of disposable plastic. Everyone should show by their example how to change. As a start, buying disposable packaging products should stop, ” said Milica Boca from Zero Waste.

The collected waste will be categorised and documented as part of the #BrandAudit global initiative. The data obtained will be used to make recommendations for producers and municipalities regarding waste reduction, collection, its reuse and better recycling. The media will be informed about the results of the action in Montenegro at the beginning of October.