The European Union has created a €5 million (7.9 billion MMK) emergency cash fund to assist thousands of garment workers who lost their jobs due to the economic impact of the COVID-19 crisis. 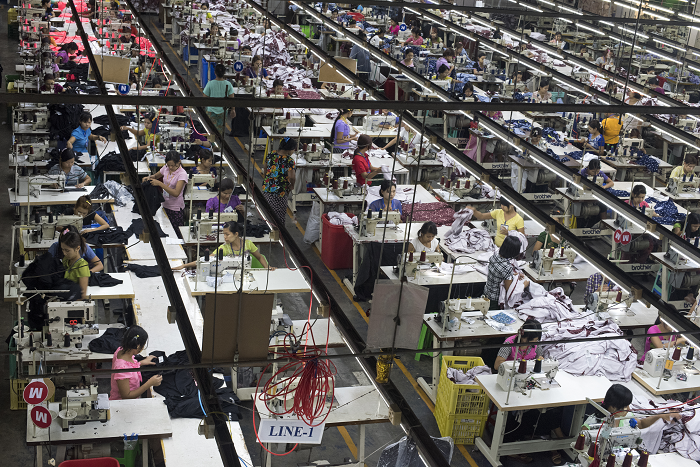 The COVID-19 pandemic has severely affected Myanmar’s most important export markets, including the European Union. In the country’s important garment, textiles and footwear sector, lower demand and suspended orders already resulted in dozens of factories closing and laying off thousands of their – predominantly female – workers. Over 25,000 workers from more than 40 factories have lost their jobs by the end of March 2020. In the current circumstance, out of 700,000 workers in the apparel industry an estimated 350,000 are at risk of either being suspended without pay or losing their jobs permanently.

In solidarity with Myanmar and the workers at risk in the garment sector, the European Union now created a Myan Ku (“Quick Assistance”) Fund, an emergency cash fund of € 5 million (7.9 billion MMK) that will disburse cash transfers through Wave Money directly to the workers to help them through this crisis.

1) Cash transfers of an expected average of 75,000 MMK monthly for one to three months for 30,000 to up to 80,000 workers in crisis who lost their jobs or face eviction from their homes;

2) Cash transfers of 125,000 MMK for workers whose contracts were illegally terminated;

3) Cash transfers to workers in Small and Medium Enterprises that agree to retain workers and continue cash or in kind payments (accommodation, meals).

SMART Textile & Garments, the EU’s longstanding flagship programme assisting garment manufacturers in Myanmar in improving production standards and social and environmental corporate responsibility, will manage the Myan Ku Fund. SMART will work in close cooperation with local civil society organisations and trade unions in selecting recipients, and coordinate with its strong network of manufacturers and their associations, brands, and government partners.

The garment exports to the European Union have been an immense success story, with Myanmar selling 70% of its garment exports to Europe, creating some 450,000 new jobs mainly for young women from all across Myanmar. This has improved the lives of millions of people throughout the country, and given a significant boost to the expansion of labour rights, higher environmental standards and the emergence of a manufacturing base, since the EU opened its markets in 2011. Given the importance of the garment sector for Myanmar’s socio-economic development, and the sector’s strong ties with the European Market, the Myan Ku rapid emergency response mechanism is a testimony of the European Union’s solidarity with Myanmar and its commitment to strongly support the country’s political and economic transition, even in times of crisis.

The Myan Ku rapid response emergency fund will initially be available from April to December 2020 and is financed through the EU’s Humanitarian Development Peace Nexus Response Mechanism (NRM) managed by UNOPS.