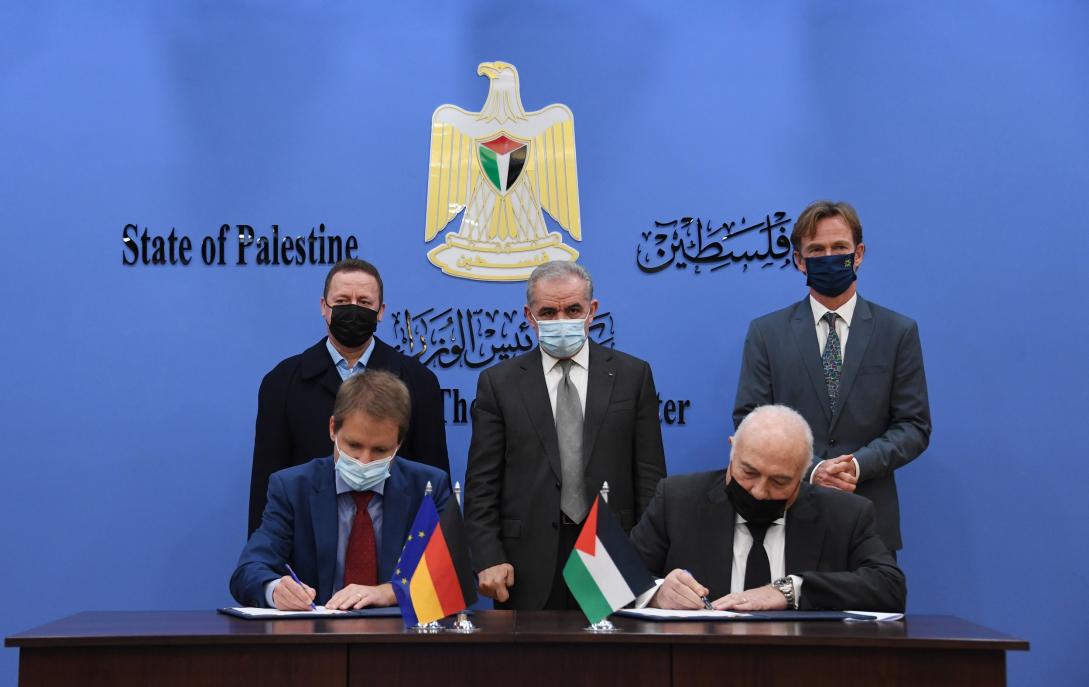 The Palestinian Ministry of Finance and the KfW German Development Bank signed today a Financing Agreement funded by the European Union to improve the  availability and reliability of water supply services in Gaza City and Jabalia. The signing ceremony was attended by the Palestinian Prime Minister Mohammad Shtayyeh and the EU Representative Sven Kühn von Burgsdorff.

The availability of clean drinking water in Gaza is one of the lowest in the world. Around two million Palestinians in Gaza are relying mainly on the coastal aquifer and limited quantities of purchased and desalinated water as a source of fresh water.  The water situation in the northern governorates of the Gaza Strip has already reached a critical situation.  The project will finance the water infrastructure required to improve the quantity and quality of water supply in Gaza City and Jabalia.

The project includes the construction of a new concrete reservoir with a capacity of 26,400 cubic meter, new bulk water pipes, general buildings and service facilities for various sites.

The project complements the German Government financed project, “Gaza Central Desalination Plant – Reconfiguration of Water Supply Infrastructure” that received bilateral funding from Germany with an amount of Euro 55,6 million. The EU and German contributions of Euro 64,5 million in total are expected to increase the availability of drinking water and, thereby, improve living conditions for up to one million residents in Northern Gaza.

"Severe water shortages and acute water quality problems continue to negatively affect the lives and livelihoods of many Palestinians in Gaza. In an effort to improve the situation, the EU has since 2011 included water and sanitation as priority sectors within its overall financial assistance to the Palestinian people", said the EU Representative, Sven Kühn von Burgsdorff at the signing ceremony. "Today's ceremony marks the beginning of a project which can make a real difference to the quality of life of Palestinians in Gaza. It is also a clear example of how the EU works together with its member states to bring tangible results for the benefit of the Palestinian people. In this context, Gaza remains a priority for the EU as we continue to call for a fundamental change in the political, economic, and social situation there. A Palestinian government that is able to assume its full responsibilities is a crucial starting point for this process", added the EU Representative.

“We are pleased to cooperate with the EU with the shared objective of improving the water supply system in Northern Gaza.” said Mr. David Kunze, Director of KfW Office Ramallah - Al Bireh. This project will have significant effect on the quantities and quality of water supplied to residents of Gaza City and Jabalia; thus, contributes to an improved of life quality.”

The EU proactively protects the water and environment in Palestine. Currently, the EU has ongoing projects totalling Euro 110 million in the water and sanitation sector. The EU is supporting the development of wastewater treatment plants in particular areas where water supply is scarce, such as Hebron, Tubas and Nablus. In Gaza, the EU is investing in both small and large-scale water supply programmes, including taking the lead in funding the Gaza Central Desalination Plant with an investment up to Euro 150 million over the coming 5 years, which will provide clean drinking water to around two million Palestinians in the long term.

KfW is Germany’s development bank. It promotes development projects in the Middle East, Asia, Africa, Latin America and South-eastern Europe on behalf of the German Government. Further, KfW supports developing and emerging market countries in improving living conditions and protecting the climate and the environment.