Viva Europa 2022: A Celebration of Partnership and Friendship of the European Union with the Philippines

16.05.2022
Philippines
Press and information team of the Delegation to PHILIPPINES

Engage yourself in a colourful array of cultural treats from May to June 2022 as the European Union presents   “Viva Europa 2022”. 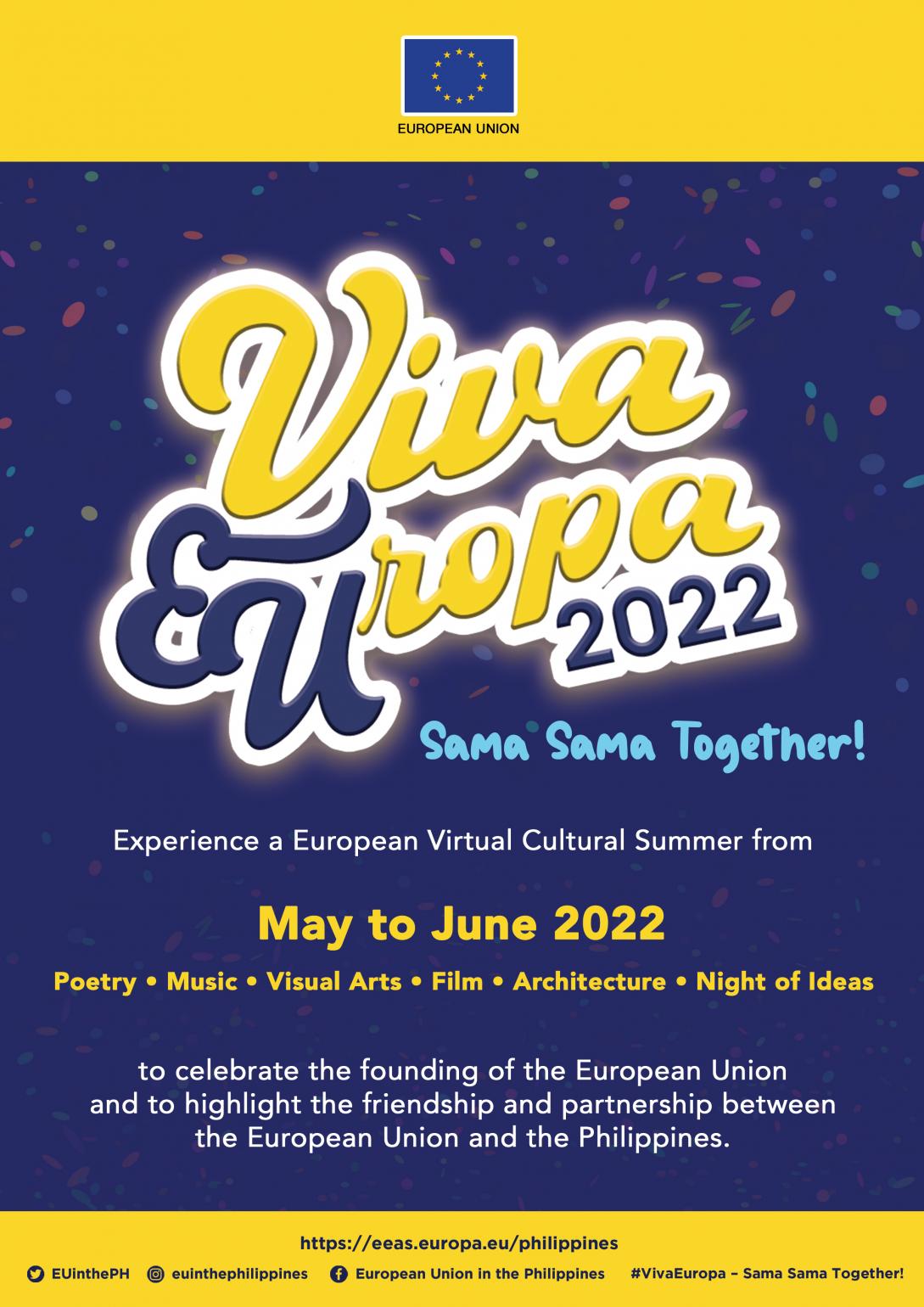 During this cultural summer, get ready for a wonderful European online and onsite experience of the best of poetry, visual arts, music, film, architecture and sharing of ideas.

Viva Europa 2022 aims at highlighting the partnership, friendship and the shared cultural values between the EU and the Philippines in the context of the bilateral Partnership and Cooperation Agreement. The cultural festival takes place in May on the occasion of the commemoration of Europe Day on May 9.

Europe Day celebrates peace and unity in Europe. The date marks the anniversary of the historic 'Schuman Declaration' that set out the idea for a new form of political cooperation in Europe, which would make war between Europe's nations unthinkable. This declaration started the process of European integration through what is currently the European Union – a Union of 27 European countries founded on the values of respect for human dignity, freedom, democracy, equality, the rule of law and respect for human rights.

Viva Europa 2021 is the outcome of the cooperation between the EU Delegation to the Philippines, the Embassies of Belgium, Czech Republic, Denmark, Germany, Spain and Instituto Cervantes de Manila, Ireland, France and Alliance Francaise de Manille, Italy through the Philippine-Italian Association, Hungary, Austria, Poland, the University of Santo Tomas and Far Eastern University.

The following is a list of activities for Viva Europa 2022:

European and Filipino artists have joined forces to show their advocacy for “Water” and marine resources preservation through paintings and sculpture. This exhibition will take place at the Yuchengco Museum, Makati City, from May 20 to 31, 2022. The exhibition fittingly coincides with the EU Green Week (May 30 to June 5) and the lead-up to the UN Ocean’s Conference (Lisbon, June 27 – July 1st 2022). Curated by César Caballero, the exhibition is participated in participated in by Louis Dumont (Belgium), René Reitier (Germany), César Caballero (Spain), Henri Eteve (France), Viviana Riccelli (Italy), Radha Makitalo (Finland), Jeanette Kamphuis (Sweden), Romania Diaz (Philippines and Italy), Fara Manuel Nolasco, Kizel Cotiw-an and Ramon Diaz (Philippines).

Get caught in the passion, the romance and fire of European and Filipino poetry on May 27, 2022 from 4 to 6pm. This year’s recital will have the participation of Belgium, Czech Republic, Germany, Spain, Ireland, France, Italy, Austria and Poland. Notable Filipino poets from the University of Santo Tomas will read their own works. Distinguished poets from the University include Nerisa del Carmen Guevara, Benedict Parfan, Joselito delos Reyes, and Paul Castillo.

This year, La Punta della Lingua poetry festival from Italy will once again join the Bersong Euro-Pinoy poetry recital. Poems to be rendered adhere to the theme of “Togetherness and Hope”. Bersong Euro-Pinoy will be streamed live at the EU Delegation to the Philippines’ Facebook page.

If you are a fan of choral music or if you were once a member of your school choir, you will surely enjoy Musica FEUropa.  The traditional choral festival of the Far Eastern University will be held in the afternoons of May 14, 21 and 28, 2022. Watch the choirs perform famous music from folk to classical from both the EU and the Philippines during the month long choral concerts.

On May 18, at 5:00pm, the Philippine Italian Association and Politecnico di Milano will hold a free-of-charge webinar on “Architectural Heritage as expression of local communities’ identity” with Professor Nora Lombardini as speaker.

The safeguarding of cultural heritage and, specifically, architectural heritage, as an expression of cultural identity, contributes to the defence, as the 2011 Faro Convention argues, of human rights, and is part of the concept of democracy. Therefore, there is a need for a collective participation in its protection and enhancement, which concerns not only the governing bodies but also the communities that identify themselves in cultural heritage.

On May 21, the Film Institute of UP Diliman, with the support of the Embassy of Italy in Manila and in partnership with the Philippine Italian Association, will reopen its Cine Adarna in celebration of the Centennial of the great Pier Paolo Pasolini. The program will feature the outdoor screening – free of charge – of Accatone ("The Scrounger"), the first, groundbreaking film entirely directed by Pier Paolo Pasolini, introduced by H.E. Marco Clemente, Ambassador of Italy to the Philippines. The screening will also be preceded by a "Poetic Conversation: Pasolini and Me. A Shared Moment in Film and Poetry" through which Professor Nick Deocampo, Filmmaker and Film Historian, will unveil the influence of the great Italian director and poet in shaping the aesthetic of his own works. The program will start at 5:30 PM.

On May 26, 2022, the “Night of Ideas” will bring together cultural institutions and film professionals from France, Italy, Romania and the Philippines to exchange ideas and talk about how the arts, cinema, society survived the pandemic and continue to develop in the context of the new environment.

As we finally move on, the world is called to (re-)build together and we would like to look into bright ideas born during the pandemic, and how the different sectors of society and of the economy have adapted to the new realities and to cope with what we call the “new normal”.

The panellists will converge at the Ayala Museum and the event will be livestreamed from 7 to 9pm on Facebook Live.

Initiated in 2016, the “Night of Ideas” brought together thinkers in Paris to exchange ideas on the major issues of our time. Since then, every year on the last Thursday of January, the Institut Français and the French cultural network in the world invite key opinion leaders to share their thoughts on the current concerns of society.

Last year, 2021, at the height of the pandemic, the “Night of Ideas” in the Philippines looked into how the global crisis brought us together, and specifically how cycling became an alternative mode of transport for a population in quarantine and deprived of public transportation.

The Instituto de Cervantes of Manila held a flute concert on May 3 in the context of the exhibition “From the First Circumnavigation to the Manila Galleon: Music around the Iberian routes” at the National Museum.

The flute concert enabled guests to listen to the musical pieces related to the many ups and downs and significant places of those routes " from the Iberian Peninsula, Spain and Portugal – countries that were protagonists of the first global expansion – to the Philippines, Siam, Malaysia and Burma in Southeast Asia; as well as Japan and China, passing through the coasts of Africa and India.

The performer, Pedro Bonet, has been a professor of flute at the Madrid Royal Conservatory of Music and has given concerts in more than 40 countries.