Europe Houses in Kriva Palanka and Strumica turn one!

Over 300 events, engaging more than 11,000 young people in promoting a clean environment, healthy lifestyles, increased participation of young people in society and their greater mobility through Erasmus +… This is a summary of the work of the Europe Houses in Kriva Palanka and Strumica in only one year. Figures that promise even greater results in the period to come. 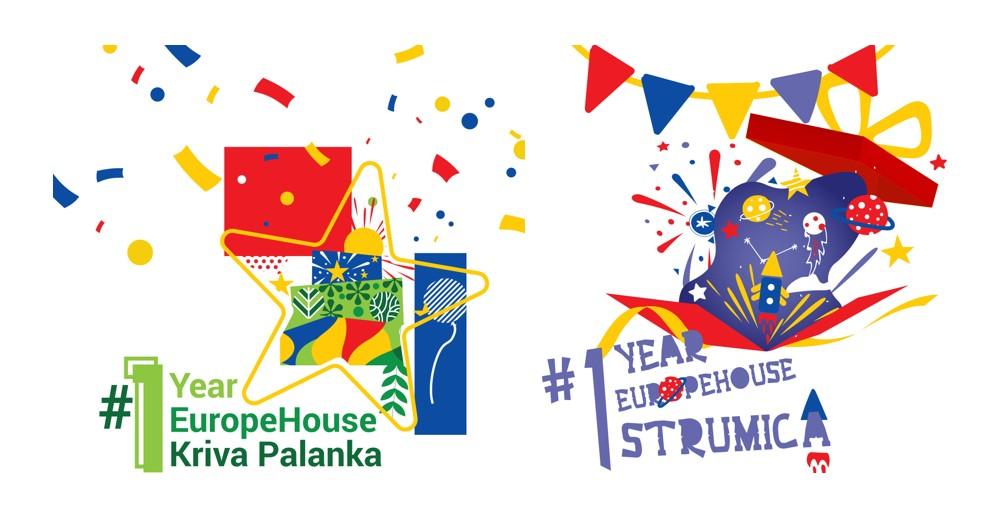 In the first year since their opening, the Europe Houses in Kriva Palanka and Strumica made more than baby steps. They have made leaps and bounds to catch up with their Skopje ‘sibling’, who recently turned two.

Inaugurated in February 2021, only a few days apart, the first youth hubs funded by the EU outside Skopje have so far organised around 330 events on topics of concern to young people in Kriva Palanka and Strumica and in respectively the north east and south east.

In spite of the constraints imposed by the pandemic, the two hubs organised an impressive number of events inspired by the Green Deal, a top priority for the EU. There were cleaning actions and numerous workshops emphasising the importance of recycling and using renewables, accompanied by events for young people to keep physically active – not only in Covid times.

Opportunities that Erasmus + offers to young people were also high on the agenda, together with workshops for greater participation in the decision-making process, but also for creative work (photography) or to gain digital or entrepreneurial skills.

The past 12 months were also marked by cultural exchange activities and film screenings, often involving embassies and organisations from EU Member States, along with music and theatre performances and the promotion of young talents.

The first birthdays of the Europe Houses in Kriva Palanka (18 February) and Strumica (21 February) were celebrated with full-day programmes, attended by EU Ambassador David Geer, ambassadors from several Member States and young European ambassadors. The celebration in Kriva Palanka also had a cross-border cooperation element – a friendly match between female basketball players from the town and Sofia, Bulgaria.

It was a display of local musical, artistic, sporting talents and achievements and of goals for the future – one which is greener, more democratic and prosperous inside the EU. Thanks to Europe House young people in Skopje the north east and south east are already working to make these goals a reality. Hopefully soon, we will open new hubs in other parts of the country bringing young people from right across the country into the conversation.

IDAHOT 2022: Speaking out against injustice, inequality and prejudice while celebrating achievements