21.07.2022 Press and information team of the Delegation to SIERRA LEONE

Barely eight weeks after the commissioning of the Magbele Bridge in Port Loko District, the European Union has again demonstrated its firm commitment to the socio-economic transformation and development of Sierra Leone with the inauguration of the Mabang Bride over the Ribbi River between Port Loko and Moyamba Districts. 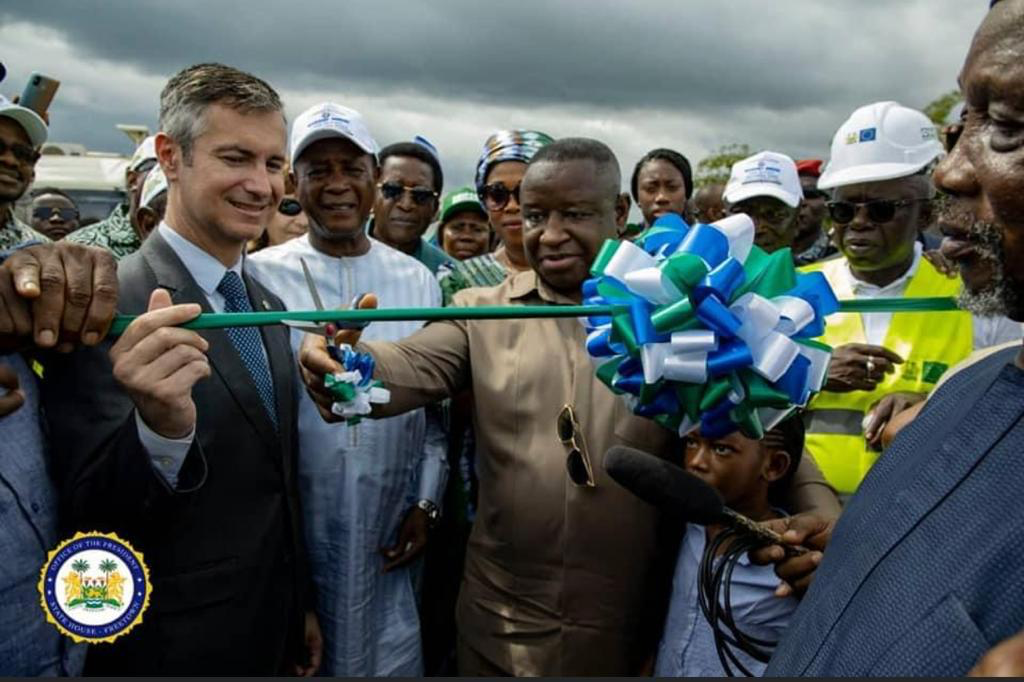 The Mabang bridge was commissioned on Friday 8th July 2022 by the President of the Republic of Sierra Leone, His Excellency Dr Julius Maada Bio, in the presence of the European Union Deputy Head of Delegation, Juan Antonio Frutos.

The commissioning attracted a host of people from all walks of life who travelled from both regions and other parts of the country to witness the ceremony.

This newly built bridge, connecting the country’s Northwestern and Southern regions, is a dual carriageway carrying traffic in the opposite directions, measuring 10.8 metres wide and 231 metres long. It is built with a composite of steel and concrete, making it Sierra Leone’s longest bridge of that kind of structure in recent times. The infrastructure, which includes a paved road of 548 metres on either end of the bridge, had a cost of almost 12 million Euros (160 million SLL, according to the new SLL denomination) and  is part of the Moyamba-Moyamba Junction Roads and Bridges project with a cost of 48 million Euros (640 million SLL). He reminded that the new bridge replaced an old one-lane railway steel bridge that was converted for vehicular traffic but collapsed in 2013, noting that since then, crossing the Ribbi river was only possible with a hand-pulled ferry and other small boats.

“The benefits of bridges at places where previously there was no bridge are immense – they bring people closer together, bridges provides connectivity,” he said.

He emphasized that bridges are powerful drivers of growth, development and better livelihoods for the people.

He underlined that beyond the Magbele and Mabang bridges, Sierra Leone and the European Union had worked successfully together on many more road infrastructure improvements, including:

He also explained that the project was part of a road infrastructure network connecting the whole of West Africa supported by the European Union. “The cooperation of the EU and Sierra Leone, our teamwork, has contributed to more connectivity in the sub-region.”

Director of the National Authorising Office, Ambrose James, said that since the old the bridge had collapsed in 2013, people in the region had faced considerable challenges in terms of movement, transportation of goods, produce, and for services to reach them in time. “Today is historic, as the commissioning will bring much needed relief to the people of this region and to the country as a whole,” he said.

Delivering his keynote address, President Dr Julius Maada Bio underlined that the opening of the Mabang Bridge to traffic will help revive major commercial activities and reconnect both regions after nine years. “This is the spirit of cooperation between my Government and the European Union that is transforming infrastructure, communities, and lives. Coming at a time when there is a seeming petering away of international development assistance, Sierra Leone truly appreciates this intervention from the European Union,” he said.

“It is in that spirit that I want to thank the European Union that has provided finances and worked very closely with my Government”, the President concluded.

The strong partnership between Sierra Leone and the European Union not only extends to infrastructure projects, but also other critical sectors. The EU is a longstanding, committed and reliable political and development partner of Sierra Leone, encouraging and supporting the consolidation and progress on peace, stability, democracy, governance, human rights and development in the country.

Sierra Leone and the European Union work together closely on key sectors like education, agriculture, environment, energy and rural electrification, governance, elections, or the management of public finances.