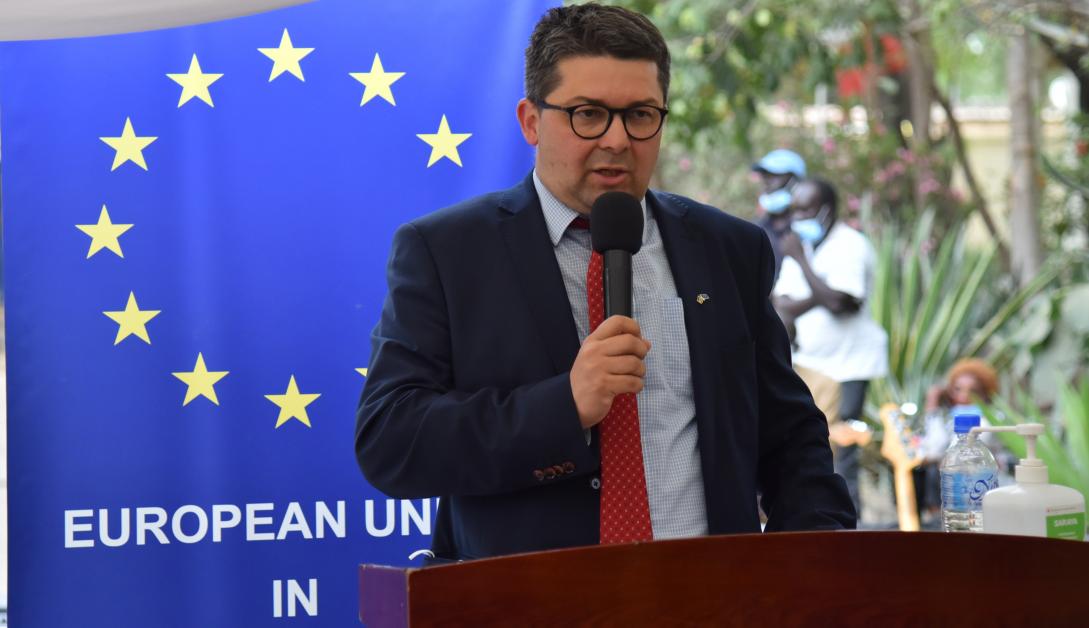 The European Delegation to South Sudan on Thursday commemorated the International Human Rights Day in a glamourous event at the European Compound with a renewed commitment to support the promotion of rule of law and observance of Human Rights regardless of race, religion, gender or sexual orientation.

“The European Union is committed to supporting democracy and human rights in its external relations, in accordance with its founding principles of liberty, democracy and respect for human rights, fundamental freedoms and the rule of law,” Dionyz Hochel, Acting Head of the European Union Delegation to South Sudan said. “It is worth noting that in South Sudan we have already ongoing support for civil society and Human rights defenders, reconciliation activities in communities via the Council of Churches and women empowerment projects at the economic and legal levels.” Chargé of the French Embassy in Juba, Xavier Verjus Renard.

European diplomats; Jelte van Wieren, ambassador of the Netherlands, Joachim Waern, Head of the Office of the Swedish embassy and Xavier Verjus Renard, the  Chargé of the French embassy all reiterated the need for respect of human rights, especially the rule of law, freedom of association, expression and press for democracy to thrive in the new nation. Head of the Office of the Swedish Embassy in Juba, Joachim Waern.

“The core function of government is to protect the human rights of its people. This is enshrined in the first article of the Dutch constitution and the basis of our interactions abroad including here in South Sudan. Today, we celebrate Human Rights Day with European Union, applauding all South Sudanese Human right activists for their great work,” said Dutch ambassador Wieren.

European Diplomats interacting with some members of the South Sudanese Civil Society during the Human Rights Day event.

The European diplomats and Humans Rights activists both reiterated the need to work together in promoting the observance of Human Rights despite the numerous changes facing them.