02.08.2022 Press and information team of the Delegation to TANZANIA

The Delegation of the European Union to Tanzania recruited for two months Ms. Lorraine Kakuyu who had fled the war in Ukraine after nearly completing her first year of medicine studies at the University of Kharkiv. She recalls the moment when she left her former home in the wake of Russia's invasion and reunited with her family in Tanzania, relieved of having escaped the armed conflict. 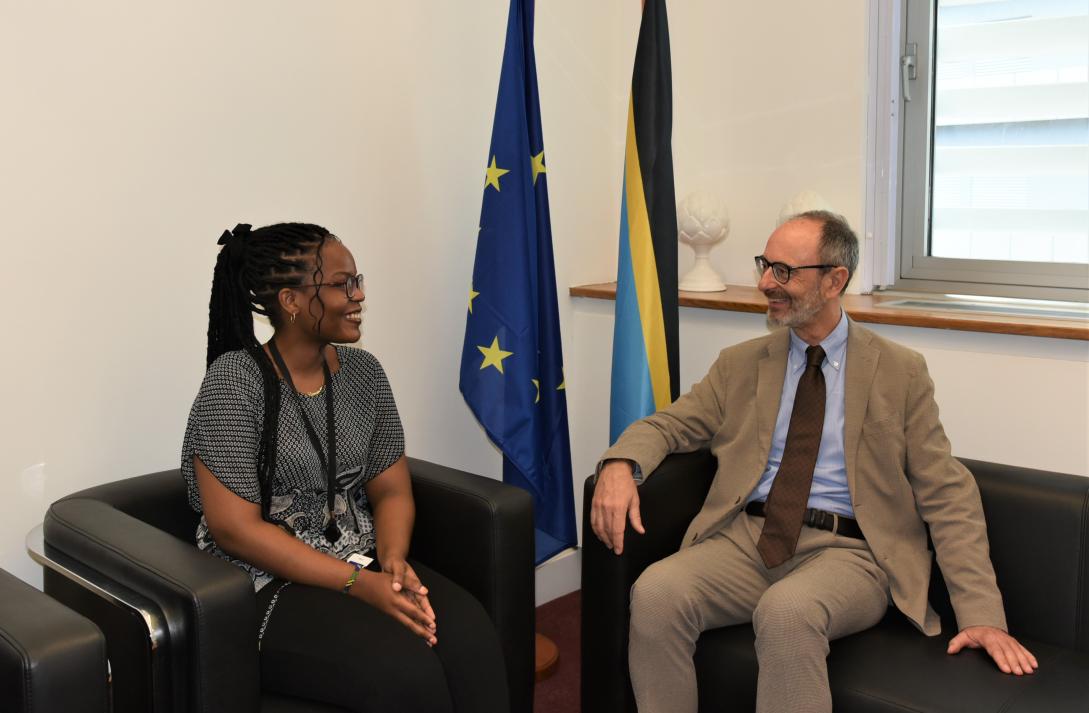 In the summer of 2021, Ms. Lorraine Kakuyu, born and raised in Tanzania, moved to Kharkiv, Ukraine, to pursue a Bachelor of Science in Medicine and Surgery at the National Medical University. This move was a fresh new start and now, looking back at her time prior to the outbreak of the conflict, she has fond memories of those first months when she lived independently abroad, formed new friendships and enjoyed the excitement of discovering a new and diverse culture.

“Living and studying in Ukraine was actually one of my greatest experiences: the international exposure, the interactions and my newly gained independence. I immersed myself into a new culture and took Ukrainian language classes. Ukraine is a beautiful country which made me rediscover myself and gain new confidence.”

The escalating conflict between Russia and Ukraine had been simmering for months, but did not have any particular impact on Lorraine’s daily life until rumours and indications emerged that a Russian invasion was imminent. After weeks of tensions, on February 24, 2022, when Russian troops invaded the non-government controlled areas of the Donetsk and Luhansk oblasts, the Government of Ukraine declared a state of war, announcing that Russia had launched “a full-scale attack” from multiple directions. Amid rising uncertainty, Lorraine received a phone call from a relative the evening before telling her to prepare an emergency bag and wear shoes at night in case she needed to flee and seek safety in a shelter.

“At 4 am, my friend and I woke up to the sound of explosions, ambulance sirens, and screeching footsteps from people running around in the building. I felt very scared. There were no more water and electricity”, she recalled. When the sun rose, Lorraine witnessed a scene of chaos in the city centre where panicked residents were lining up in front of ATMs and supermarkets amid fears that the city could soon be turned into a war zone. “We left the hostel to stock up on survival gear like canned and dried food. But when we reached the supermarket, it was already too late. All that was left on the shelves were chocolate bars, mini croissants, juice, water, and some noodles.”

The sound of missile strikes and fast-moving news reporting that the Russian invasion was picking up momentum despite resistance caused Lorraine and her friend to seek shelter in an underground metro station for the following night. “The metro station was so packed that we could not sit anywhere. The cold was unbearable so we decided to return to our hostel, but sleeping was impossible. We were told to switch off all lights in order to hide from Russian shelling.”

Over the course of the next day, Lorraine heard talks about trains taking passengers to the western city of Lviv where it was possible to cross borders to safe neighbouring countries such as the Baltic States. “We had no food, it was very cold, and we waited for hours at the train station,” she remembered. The train station was crowded and chaotic, there was no regular train schedule, and Lorraine felt increasingly anxious that she would not manage to catch a train out of Ukraine before curfew.

At about 7 am, relief sank in when a train headed towards the Ukrainian capital Kiev passed through the station. Although travelling through the capital was risky given the Russian offensive, Lorraine considered she had no choice, but to hop on and leave. “Luckily, the train conductor later said that the train would continue to Lviv,” she added. As her train pulled through Kiev, she witnessed a scene that she would never forget. Loud explosions were ranging over the city, and panicked civilians tried to cram onto the passing trains, grasping for an escape route west. She explained, “The tremor of the missiles was eventually so strong that the train had to pause. We could see flashes of orange flames coming from the explosions.”

Fortunately, the next morning, Lorraine arrived safely in the main railway terminal in Lviv, the train terminus, where she hoped to continue to Poland. “The last leg of the journey was challenging,” she remembered. “The passing trains were already packed over capacity with refugees who wanted to flee from Ukraine into neighbouring countries. There were tense moments as some trains only allowed women and children to board, and we did not want to leave our male travel companions behind. Eventually, we made it to the city of Chop where we arranged a car to take us to the border. In the middle of the night, however, the car stopped, and we had to walk the last part in the freezing cold.”

On February 28, 2022, Lorraine made it across the Ukrainian border into Hungary and subsequently managed to reunite with her family in Dar es Salaam, Tanzania, relieved of having escaped the armed conflict.

To express solidarity with Tanzanian refugee students, the Delegation of the European Union to Tanzania offered Lorraine a two-month employment that would also give her time to reflect on her future. She joined the Delegation in May 2022 where she assisted with development cooperation activities, mainly in the field of health.

She said, “It was a wonderful experience working for the European Union Delegation. I witnessed first-hand how the European Union promotes sustainable economic, social and human development in Tanzania to the benefit of the citizens. Hopefully, once I have finished my studies, I will continue supporting not only Tanzania, but also other countries in their development.”

The outbreak of the war has caused Lorraine to rethink her long-term plans. She explained, “The upcoming challenge is deciding on my next steps. What am I going to do now? Where will I study? But the most important thing is that I made it out of Ukraine safely and reunited with my family. I am also grateful to the EU Delegation for the opportunity that was given to me. Every day, I am praying for the people of Ukraine.”

Lorraine, who is now safe in Tanzania, is one of an estimated 9.9 million people who have fled Ukraine since the conflict broke out.