HR/VP Blog – An intense year has now passed. The Russian invasion of Ukraine has been a geopolitical earthquake. It has caused in particular a serious energy crisis in the EU. However, despite our dependence on imports of Russian fossil fuels, we did not give in to Putin's blackmail. We managed to fill the gap and finalised important reforms to accelerate our energy transition. They will have a significant geopolitical impact. 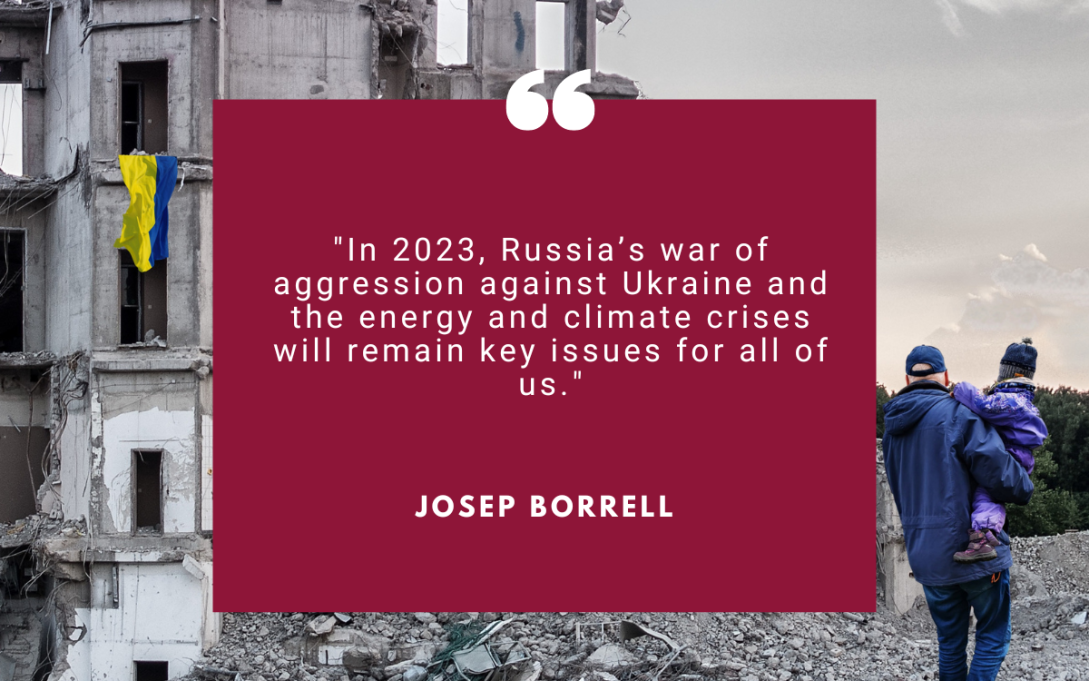 The year 2022 has been dominated by Vladimir Putin's war of aggression against Ukraine. This war has already caused tens of thousands of deaths in Ukraine and multiple war crimes committed by Russian forces. Having failed to conquer Ukraine, Vladimir Putin decided to destroy it and in particular its energy infrastructure, to force its inhabitants to live in cold and darkness this winter.

Beyond Ukraine, this war has also triggered a serious energy crisis in Europe due to Russia's weaponization of energy. Vladimir Putin obviously thought that EU's heavy dependence on imports of Russian fossil energy, and in particular gas, would allow him to divide the EU, preventing it from supporting Ukraine actively. This is why, as early as 2021, he began to restrict Russian gas deliveries to the EU despite the existing long-term contracts between Russian suppliers and European customers. He then aggravated this blackmail policy after 24 February.

This policy did indeed trigger a major crisis on European energy markets, with gas prices exceeding 300 Euro/MWh last August on the Dutch TTF spot market, compared to around 20 Euro/MWh in 2020. Due to the difficulties of French nuclear power plants and the climate change-related limited hydroelectricity production, it also led to a severe crisis on the EU electricity market, raising fears of blackouts this winter. These combined crises caused a sharp rise in energy prices for households and businesses, creating serious economic and social problems in the EU. This has led in particular to fears that the deindustrialisation process of the EU is accelerating.

Despite the energy crisis, we did not give in to Vladimir Putin's blackmail and EU member states stayed united, supporting Ukraine decisively.

Despite this energy crisis, we did not give in to Vladimir Putin's blackmail and EU member states stayed united, supporting Ukraine decisively, including with weapons deliveries. On the energy front, we responded last May by launching the RePowerEU plan. In the framework proposed by the European Commission, EU member states took different short-term measures to alleviate the difficulties of households and businesses. We also decided an embargo on Russian coal from last August and on Russian oil from last December accompanied by a price cap on Russian oil exports to other countries, leading to a significant decrease of Russia's income from fossil fuel sales.

We managed to compensate for the lack of Russian gas principally with other Liquefied Natural Gas (LNG) sources. We succeeded to fill our stocks for this winter and to reduce significantly our use of gas and electricity. It is in particular interesting to notice how quickly Germany reacted. Russian gas imports have been reduced from 55 % of the total at the beginning of 2022 to almost zero and oil from 40 % to zero. It marks a turning point in the EU - Russia relations, which have been very much conditioned until now by the energy issue.

As a result, currently the price of gas on the European spot market is back to its level of last February before the invasion of Ukraine and the price of oil is back to its level of last January. However, energy prices remain still high and 2023 promises to be another difficult year regarding gas supply. We have decided in particular to buy 15% of our gas stocks jointly this year and apply a price cap for the gas we buy to limit excessive speculative expectations on this market. In the midst of this energy crisis, we have also adopted several measures to fight climate change and accelerate the decarbonisation of our economy.

It is in this context that on 18 December, EU legislators, i.e. representatives of EU member states and the European Parliament, reached a deal to reform the EU Emissions Trading System (ETS). The EU ETS, put in place in 2005, covers the high CO2 emitting sectors in the EU, like power and heat generation, energy-intensive industrial sectors and commercial aviation.

Covered companies receive a yearly CO2 emission allocation and can eventually trade them with others, thus setting a market price for CO2. Every year, the EU lowers the permitted level of emissions. This is an efficient way to guarantee an overall decrease in emissions, by ensuring that this is done at the lowest cost.

In the new EU law, the amount of emissions in the covered sectors will be reduced by 62% by 2030, compared to 2005 levels, instead of 43% under current legislation. We will also include the shipping sector in the EU ETS, making the EU the first jurisdiction to do so. Between 2026 and 2034, the EU will gradually phase out free emission allowances currently given to EU companies.

This much more ambitious target under the EU ETS is one of the key elements that allowed the EU to raise its greenhouse gas (GHG) reduction targets to 57% by 2030 compared to 1990 at COP 27 in Sharm el-Sheikh.

However, the reform of the EU ETS also increases the risk that energy-intensive EU industries will relocate to countries with less demanding climate standards. Such moves, called “carbon leakage”, would not only hurt employment in the EU, but would also cancel out the positive effect of the measures that EU is taking for the global climate, as GHG emissions would simply increase elsewhere, thus offsetting the decrease in Europe. For the climate, it does not matter where the emissions are coming from but people everywhere will suffer their consequences.

“Carbon leakage”, would not only hurt employment in the EU, but also cancel out the positive effect of EU’s measures, as greenhouse gas emissions would simply increase elsewhere, thus offsetting the decrease in Europe.

This is why the strengthening of EU climate rules will be coupled with a new Carbon Border Adjustment Mechanism (CBAM). The CBAM will apply to imports of goods whose production is most at risk of “carbon leakage”: cement, iron and steel, aluminium, fertilisers, electricity and hydrogen.

During an initial period, importers of these goods will only have to report GHG emissions embedded in their imports, without making any payments. The real phase-in of the CBAM will take place between 2026 and 2034, in parallel to the above-mentioned phase-out of free emission allowances to EU companies.

Once the permanent system is in place, importers will have to buy CBAM certificates corresponding to the GHG content of the goods imported in the EU. The price of these certificates will be set based on the weekly price average of EU ETS allowances. If a carbon price has already been paid in the country of origin, this amount will be deducted from the CBAM credits to be acquired.

A level-playing field between EU companies and their competitors

The CBAM is aimed at establishing a level-playing field between European-based companies and their foreign competitors regarding GHG emissions requirements. It is therefore not a protectionist measure and we have taken particular care to ensure that this legislation complies with the rules laid down by the World Trade Organisation (WTO).

With this reform of EU-ETS, the EU aims to play its full part in implementing the Paris Agreement and limiting global warming to 1.5 °C. It is in the interest of the whole world that we manage to implement these measures together with our partners in the fastest and most effective way. The same can be said about the anti-deforestation legislation that we have approved last December.

In the US, the Inflation Reduction Act (IRA) is based on a very different philosophy from the one we have favoured.

In recent months, the US administration has also taken important steps to accelerate the energy transition with the Inflation Reduction Act (IRA). However, this legislation is based on a very different philosophy from the one we have favoured. It does not foresee a carbon pricing and mainly provides for important public subsidies to companies producing goods incorporating green technologies on American soil.

This type of action penalises European producers in our trade relations and does not respect WTO rules. We do not want and we cannot embark in a competitive fight based on public subsidies because it would harm the world economy. The EU does not have a fiscal capacity comparable to that of the federal state in the US and adopting analogue policies to the US at member states level could fragment our internal market. We are in active discussion with the US authorities to resolve these differences of approach on this key issue.

In 2023, the energy and climate crises will remain key issues

In 2023, Russia’s war of aggression against Ukraine, the energy and climate crises and their economic and social consequences will remain key issues for the EU and the world. The EU will continue supporting Ukraine and resisting the weaponization of energy by Russia by accelerating the decarbonisation of its economy. It will require also working with our partners to stabilise global energy markets and help the most vulnerable countries to face the consequences of this new geopolitical environment.