20.06.2022 Press and information team of the Delegation to the UN in Geneva

Olga and her children, from a village near Odesa, are among the 6 million Ukrainians refugees that have already crossed the borders into neighbouring countries since the Russian invasion began on 24 February. She and her husband were about to finish building a new house for their family when the bombs began to fall in early March. They had no basement to hide in, so they decided to flee. Olga, her sister, children and in-laws crammed into her small family car with warm clothes and a few belongings and headed to Moldova, where they have been warmly welcomed and given a temporary shelter. Their story is personal, but their pain is universal. May 2022 saw the dramatic milestone of 100 million displaced people in the world, the highest ever recorded. 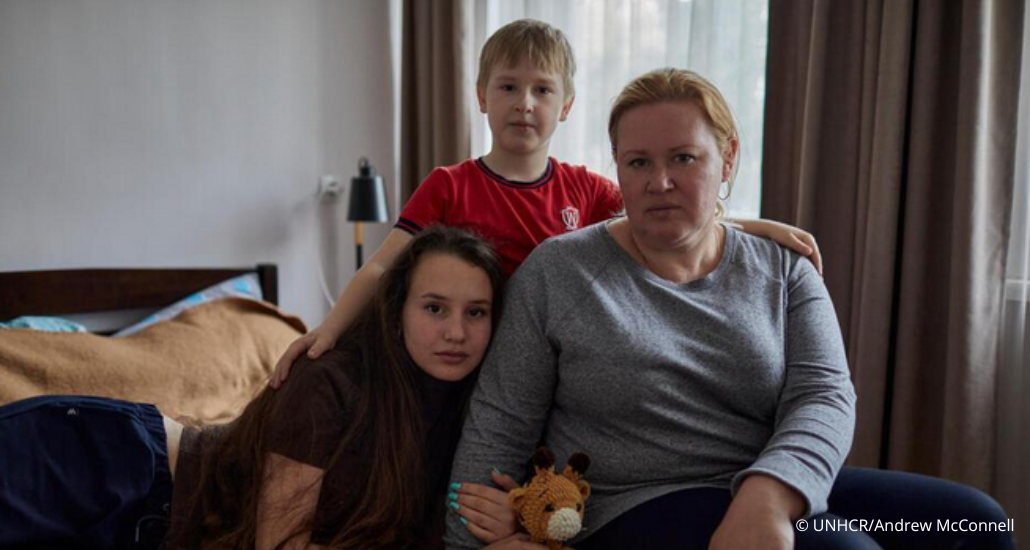 Today, more than 100 million people are forcibly displaced around the world, from Afghanistan, Syria, Yemen, and Myanmar to Venezuela or Burkina Faso”, the EU High Representative Josep Borrell said in a joint statement with the European Commission. “The EU and its Member States have stood by Ukrainians, providing refuge to over 6 million people that have fled to neighbouring countries, primarily to Poland, Romania, Hungary, Slovakia but also the Republic of Moldova. The majority of those fleeing are women and children. Children who should never have to hide from bombs and experience the horrors of war”.

The number of people displaced worldwide by war, violence, persecution and human rights violations is more than twice as high today as it was a decade ago, according to the newly published UNHCR’s Global Trends report. After ten years of continuous increase, the figure stood at 89.3 million at the end of 2021, 8% higher than the previous year. So far this year, Russia's invasion of Ukraine –causing the fastest and one of the largest forced displacement crises since World War II- and other emergencies, from Afghanistan to Ethiopia, the Sahel or Myanmar, have pushed the figure to over 100 million. “The speed and scale of forced displacement is outpacing solutions for refugees”, the UNHCR warns.

The UNHCR report also warns of other worrying factors that could make the trend worse: the intensification of conflicts and the emergence of new ones, the threat of food scarcity, inflation and the climate crisis. Last year, 23 countries, with a combined population of 850 million people, faced medium- or high-intensity conflicts, according to the World Bank. “Either the international community comes together to take action to address this human tragedy, resolve conflicts and find lasting solutions, or this terrible trend will continue”, said the UN High Commissioner for Refugees, Filippo Grandi.

On a positive note, UNHCR highlights that the number of refugees and IDPs returned to their regions grew in 2021, with voluntary repatriation having surged 71% thanks, for example, to a regional cooperation agreement to repatriate Ivorians to their country.

Why are we marking World Refugee Day today? World Refugee Day was first held around the world on 20 June 2001, in commemoration of the 50th anniversary of the 1951 Convention relating to the Status of Refugees.  Since then it has been an occasion to build empathy and understanding for the millions of people around the world who are forced to flee their homes and to recognise their resilience in rebuilding their lives. Today shines a light on the rights, needs and dreams of these refugees, helping to mobilise political will and resources so that refugees can not only survive, but also thrive.

Among refugees displaced abroad in 2021:

**These statistics do not cover the year 2022 and the situation generated by the Russian invasion of Ukraine, which by June 2022 has already caused around 6 million refugees.

How is the EU supporting refugees and their host countries?

“Working hand-in-hand with the United Nations and the international community, the EU remains a leading humanitarian and development donor helping affected populations to access food, shelter, education, health care, housing, land, livelihood support, and other basic services in situations around the world”, the EU statement on World Refugee Day reads.

The EU has always been a place of protection for people fleeing persecution or serious harm in their country of origin. In 1999, the EU established a Common European Asylum System (CEAS) to guarantee the implementation of this fundamental right and international obligation for countries, as recognised in the 1951 Geneva Convention.

In 2020, the European Commission proposed to reform the system through the New Pact on Migration and Asylum, a comprehensive approach to migration and asylum policy based on three main pillars: efficient asylum and return procedures, solidarity and fair responsibility sharing, and strengthened partnerships with third countries.

The EU is at the forefront of the international response to major refugee crises. This has been the case with ongoing crises such as Syria and Venezuela, and is now the case with Ukraine. In early March, EU ministers unanimously agreed to activate for the first time ever the Temporary Protection Directive, an exceptional measure granting a temporary protection and residence permit in the EU to all refugees fleeing Ukraine. In addition, the EU is also providing additional funds for countries that have to bear the burden of the Ukrainian refugee influx.

World Refugee Day: Joint Statement by the European Commission and the High Representative

𝙄𝙣𝙩𝙚𝙧𝙉𝙘𝙤𝙣𝙣𝙚𝙘𝙩𝙚𝙙, an event by interns for interns, at the EU Delegation in Geneva

The European Union, new Chair of the Platform on Disaster Displacement