EU Statement – 10th Review Conference on the Treaty on the Non-proliferation of Nuclear Weapons: Main Committee I

04.08.2022
New York
Press and information team of the Delegation to the UN in New York

4 August 2022, New York – European Union Statement delivered at the 10th Review Conference of the Parties to the Treaty on the Non-proliferation of Nuclear Weapons (NPT): Main Committee I 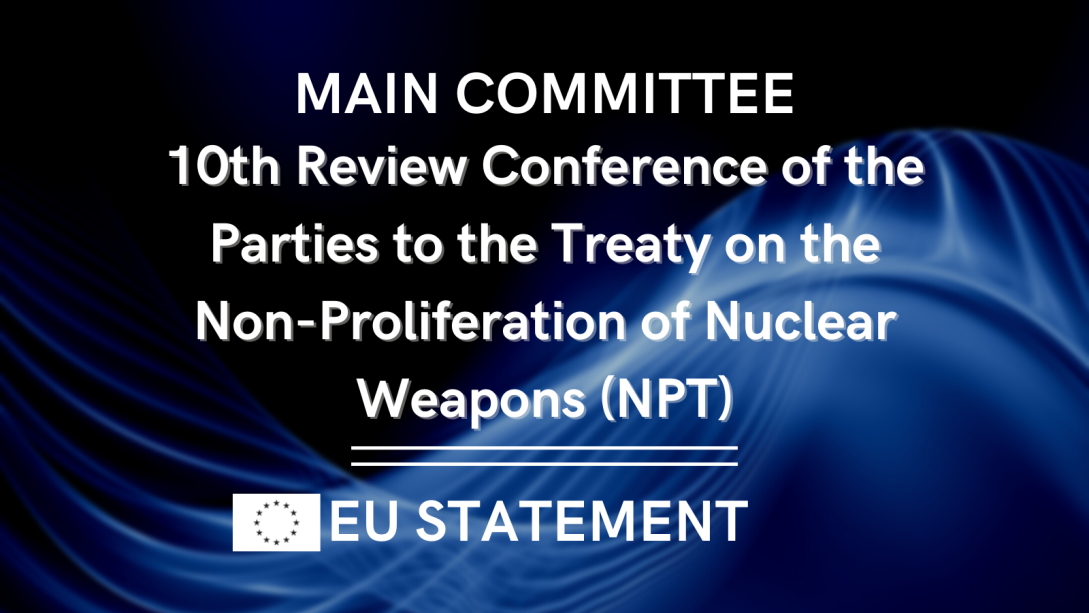 I have the honour to speak on behalf of the European Union. The Candidate Countries North Macedonia*, Montenegro*, Albania*, Ukraine and the Republic of Moldova, the country of the Stabilisation and Association Process and potential candidate Bosnia and Herzegovina, as well as Georgia, Monaco and San Marino align themselves with this statement.

Please accept our congratulations on the assumption of your duties as Chair of Main Committee I of the 10th NPT Review Conference as well as your able and successful Chairmanship of the Third NPT Preparatory Committee in 2019. You can count on our full support. Our congratulations also go to the Chair of Subsidiary Body I, H.E. Ambassador Lachezara Stoeva. We are confident that, regardless of the difficult and unexpected circumstances caused by the COVID-19 pandemic, the Main Committee I, under your leadership, will contribute to a positive outcome for the Review Conference as a whole.

The EU strongly supports all three pillars of the NPT and will continue to promote comprehensive, balanced, and substantive full implementation of the 2010 Review Conference Action Plan. We stress the need to implement all obligations under the NPT and commitments during the previous Review Conferences, including the need for concrete progress towards the full implementation of Article VI with the ultimate goal of total elimination of nuclear weapons. We are resolved to seek a safer world for all in accordance with the goals of the Treaty in a way that promotes international stability, peace and security.

The EU notes the very severe consequences associated with nuclear weapons use and emphasises that all States share the responsibility to prevent such an occurrence from happening.

The EU Member States remain committed to the pursuit of nuclear disarmament, in accordance with Article VI of the NPT. We stress the need for concrete progress towards the full implementation of Article VI, especially through the overall reduction in the global stockpile of nuclear weapons, taking into account the special responsibility of the States that possess the largest nuclear arsenals.

In this regard, we welcome the agreement reached between the United States and the Russian Federation to extend the New START Treaty for an additional five years. The reduction of deployed strategic nuclear arsenals under the New START Treaty, enhanced notably by its robust verification mechanism, contributes to the implementation of Article VI of the NPT through the overall reduction in the global stockpile of deployed nuclear weapons. Recalling the obligations for all nuclear weapon States arising from Art. VI of the NPT, we underline that the two nuclear weapon States with the largest arsenals hold a special responsibility in the area of nuclear disarmament and arms control. The EU strongly encourages seeking further reductions to their arsenals including strategic and non-strategic, deployed and non-deployed nuclear weapons and to pursue further discussions on confidence-building, transparency, risk reduction, verification activities, laying the ground for even more robust and ambitious future arms control agreements and reporting. We call on China to actively contribute to these processes.

While we acknowledge the launch of strategic dialogue between the two nuclear weapon states possessing the largest arsenals in 2021, the beginning of 2022 brought the significant deterioration of the situation related to nuclear non-proliferation and disarmament by Russia`s aggression against Ukraine.

The EU strongly condemns threats by president Putin of using nuclear force in this war. These threats are provocative, dangerous, escalatory and entirely unacceptable. At the beginning of this year, the leaders of all five Nuclear Weapons States committed to the prevention of nuclear war and avoiding arms races and reaffirmed, that a nuclear war cannot be won and must never be fought. We deplore Russia`s threatening statements and raising of nuclear alert levels, which undermine the credibility of its commitment to the January 2022 declaration. President Putin is manufacturing threats that do not exist in order to justify his further aggression. This is reckless behaviour. The EU calls on Russia to immediately de-alert its nuclear forces.

Moreover, Russia has blatantly violated its commitments to refrain from the threat of use of force against the territorial integrity or sovereignty of Ukraine under the 1994 Budapest Memorandum. We recall that Ukraine acceded to the Treaty on the Non-Proliferation of Nuclear Weapons (NPT) as a non-nuclear weapon State in 1994, having returned Soviet-era nuclear weapons and having received security guarantees. There is no doubt that Ukraine is in full compliance with its obligations under the NPT. The loss of credibility of a nuclear weapon state that is not respecting its security assurances threatens to undermine the NPT and the disarmament and non-proliferation architecture.

The change in Belarus` non-nuclear status is another worrying development, which adds to unacceptable attempts to re-define the rules-based European security architecture.

The EU stresses the need to preserve and further advance arms control, disarmament, and non-proliferation processes. In this regard, the EU acknowledges the efforts of France to demonstrate increased transparency on its doctrines and the nuclear weapons it possesses. The EU recalls Action 5 of the NPT 2010 Action Plan, which calls upon nuclear weapons states to enhance transparency and increase mutual confidence.

- Its commitment to advance nuclear disarmament, in accordance with Article VI of the NPT, especially through the overall reduction in the global stockpile of nuclear weapons.

-its support for intensified dialogue, including on strategic stability, increased transparency and confidence building measures by the nuclear weapon States to promote further progress in disarmament. In this regard, the EU acknowledges the outcome of the December Paris P5 conference.

- the benefits of concrete work on strategic and nuclear risk reduction, and therefore the urgent need for all States concerned to discuss, agree and implement practical measures to that end.

- Its call for the immediate commencement and early conclusion of negotiations in the Conference on Disarmament of a Treaty banning the production of fissile material for use in nuclear weapons or other explosive devices and that it can support the start of the negotiations in accordance with document CD/1299 and the mandate contained therein. Pending a future FMCT in force, the EU calls on all States concerned to declare and uphold an immediate moratorium on the production of fissile material for nuclear weapons or other nuclear devices.

The EU calls on all states that have not yet done so, in particular those listed in Annex II, to sign and ratify the CTBT without any preconditions or delay. Pending the entry into force of the Treaty, we call on all States to abide by the moratorium on nuclear weapon test explosions or any nuclear explosion and to refrain from conducting any action contrary to its object and purpose. The EU continues to provide significant support for the CTBTO’s monitoring and verification capabilities, with voluntary contributions of nearly €30 million since 2006.

The EU stresses the need to renew multilateral efforts and revitalize multilateral negotiating       bodies, in particular the Conference on Disarmament, looking in this regard into enhancing the organization of its work as well as its future enlargement.

The EU also recognises the legitimate interest of non-nuclear weapon States in receiving unequivocal security assurances from nuclear weapon States as part of binding and agreed security arrangements. Negative security assurances can be an important confidence building measure which strengthen the nuclear non-proliferation regime, contribute to nuclear disarmament and enhance regional and global security, in line with the goals and objectives of the NPT.

The EU supports disarmament and non-proliferation education, to which the EU Non-Proliferation Consortium, the European network of independent think tanks, is contributing with various activities.

* North Macedonia, Montenegro and Albania continue to be part of the Stabilisation and Association Process.