EU Statement – 10th Review Conference on the Treaty on the Non-proliferation of Nuclear Weapons: General Statement

01.08.2022
New York
Press and information team of the Delegation to the UN in New York

1 August 2022, New York – General Statement by the European Union at the 10th Review Conference of the Parties to the Treaty on the Non-proliferation of Nuclear Weapons (NPT) 1-26 August 2022 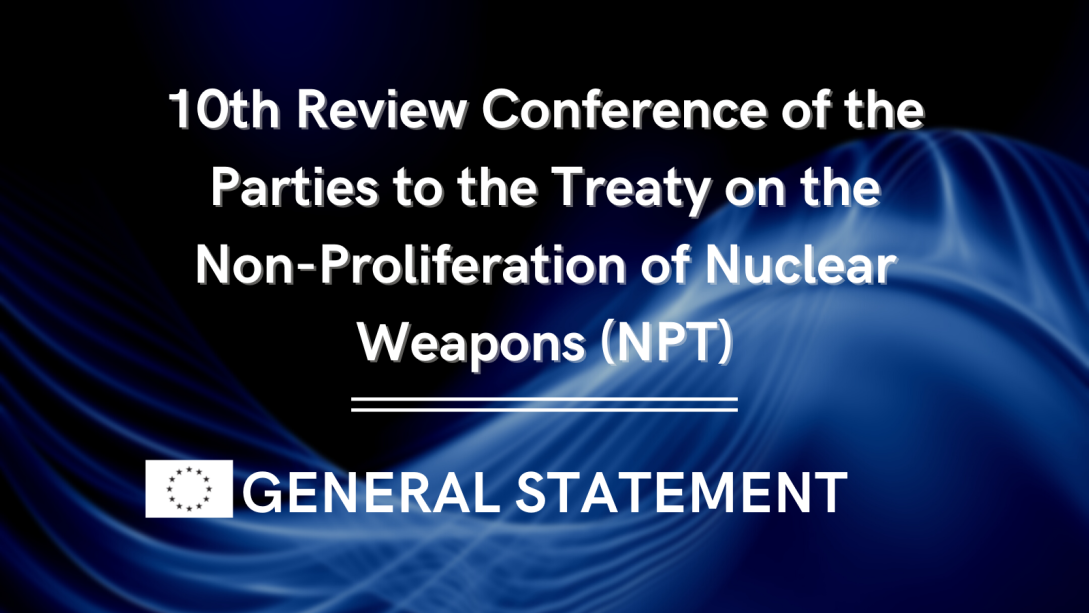 I have the honour to speak on behalf of the European Union. The Candidate Countries North Macedonia*, Montenegro*, Albania*, Ukraine and the Republic of Moldova, the country of the Stabilisation and Association Process and potential candidate Bosnia and Herzegovina, as well as Georgia, Monaco and San Marino align themselves with this statement.

Please accept my congratulations on the assumption of your duties as the President of the 10th NPT Review Conference. Your diplomatic skills, dedicated efforts and numerous consultations supported by the NPT Review Conference Bureau members as well as UNODA, have finally allowed the Review Conference to convene, despite the difficult and unexpected circumstances of the COVID-19 pandemic. You can count on our full support.

The EU has contributed actively to this NPT review cycle through thematic and regional seminars, a number of working papers as well as side events. We have made proposals for concrete, future-oriented actions and EU Member States have reported on their respective measures and initiatives in their national implementation reports.

The EU reiterates its strongest condemnation of the unprovoked and unjustified aggression of the Russian Federation against Ukraine. The Russian Federation’s invasion of a sovereign country is a gross violation of international law, including the UN Charter and it severely undermines European and global security and stability. We also condemn Belarus for its involvement in the Russian aggression against Ukraine.

The EU resolutely supports Ukraine’s inherent right of self-defence and the Ukrainian armed forces’ efforts to defend Ukraine’s territorial integrity and population in accordance with Article 51 of the UN Charter. The EU demands that Russia immediately cease its military actions, withdraw all its troops from the entire territory of Ukraine and fully respect Ukraine’s territorial integrity, sovereignty and independence within its internationally recognised borders. The international community will hold Russia accountable for its atrocities. The EU remains strongly committed to the fight against impunity.

The Russian aggression against Ukraine and President Putin’s threats of nuclear use seriously undermines and has a significant negative impact on the nuclear non-proliferation and disarmament architecture. The blatant violation by Russia of the Budapest Memorandum, reckless threats of using nuclear weapons, as well as other irresponsible acts against nuclear safety and security in Ukraine, in particular the ongoing occupation of the Zaporozhzhya nuclear power plant, are detrimental to the NPT.

Therefore, it’s of utmost importance for all States Parties to the NPT, as well as the EU, to reiterate the unequivocal support for the NPT as the cornerstone of the global nuclear non-proliferation regime, the essential foundation for the pursuit of nuclear disarmament in accordance with Article VI of the NPT and an important element in the development of nuclear energy for peaceful purposes. We are firmly convinced that a multilateral and treaty-based approach provides the best way to maintain and reinforce international peace and security.

The EU reaffirms the importance of universalising the NPT and calls on all States that have not yet done so to join the Treaty as non-nuclear weapon States and, pending their accession, to adhere to its terms. The EU recognises the NPT's historic achievements in limiting the proliferation of nuclear weapons, in facilitating cooperation on nuclear energy for peaceful purposes and in significantly reducing nuclear weapon stockpiles in previous decades. The NPT has an enduring value and its full implementation is needed now more than ever.

The EU strongly supports all three pillars of the NPT and will continue to promote comprehensive, balanced and substantive full implementation of the 2010 Review Conference Action Plan. We stress the need to implement all obligations under the NPT, and commitments during previous Review Conferences, including the need for concrete progress towards the full implementation of Article VI, with the ultimate goal of total elimination of nuclear weapons. We are resolved to seek a safer and more secure world for all in accordance with the goals of the Treaty in a way that promotes international stability, peace and security. Ensuring the implementation of the 64 actions in the 2010 Action Plan is a collective responsibility shared by all States Parties to the NPT without exception.

In the current security environment marked by increasingly high tensions and serious proliferation crises and challenges, renewed efforts must be pursued in the area of disarmament, non-proliferation and arms control. The EU calls on all States concerned to abstain from any steps that would risk further escalating tensions and undermine the significant reductions achieved after the end of the Cold War. A new nuclear arms race must be avoided.

Before the Russian aggression against Ukraine, there were some welcomed developments, including the agreement reached between the United States and the Russian Federation to extend the New START Treaty for an additional five years as well as the relaunch of the bilateral strategic stability dialogue end the restatement of the Reykjavik Summit declaration at the June 2021 summit in Geneva. The EU attaches the highest importance to the New START Treaty and regards it as a crucial contribution to international and European security. Recalling the obligation for all nuclear weapon States arising from Art. VI of the NPT, we underline that the two nuclear weapon States with the largest arsenals hold a special responsibility in the area of nuclear disarmament and arms control. The EU encourages seeking further reductions of their arsenals under the New START Treaty, including strategic and non-strategic, deployed and non-deployed nuclear weapons and further discussions on confidence-building, transparency, risk reduction, verification activities, laying the ground for even more robust future arms control agreements and reporting. We call on China to actively contribute to these processes.

The EU welcomes discussion between Presidents Biden and Xi on nuclear issues, and encourages them to establish a dialogue on strategic stability and arms control.

The EU notes the very severe consequences associated with nuclear weapons use and emphasises that all States share the responsibility to prevent such an occurrence from happening.

The EU considers the Comprehensive Nuclear-Test-Ban Treaty (CTBT) to be of crucial importance to nuclear disarmament and non-proliferation and its entry into force is a top priority for the Union. We call on all States that have not yet done so, in particular those listed in Annex II, to sign and ratify the CTBT without preconditions or further delay.

The EU calls for the immediate commencement and early conclusion of negotiations in the Conference on Disarmament of a Treaty banning the production of fissile material for use in nuclear weapons or other explosive devices (FMCT) and that it can support the start of the
negotiations in accordance with the document CD/1299 and the mandate contained therein.

The EU acknowledges the critical importance of existing nuclear weapon free zones for peace and security and remains committed to the implementation of the Resolution on the Middle East adopted at the 1995 NPT Review Conference. The EU notes the convening of the UN Conferences in 2019 and 2021 on the establishment of a Middle East zone free of nuclear weapons and other weapons of mass destruction and their delivery systems and it is encouraged by their outcomes.

The EU recognises the important work of the International Atomic Energy Agency (IAEA). The EU stresses that the Comprehensive Safeguards Agreement together with the Additional Protocol constitute the current verification standard under the NPT and calls for their universalisation without delay.

The EU is resolved to ensure the highest standards of nuclear safety, security and safeguards, recognizes IAEA's central role in this regard and the Union’s significant funding of its activities.

The EU reiterates its resolute commitment to and continued support for the Joint Comprehensive Plan of Action (JCPOA). The JCPOA is a key element of the global nuclear non-proliferation architecture, endorsed unanimously by the UN Security Council through its resolution 2231 (2015). The EU supports the ongoing intensive diplomatic efforts within the JCPOA Joint Commission and the contacts of the EU High Representative as the Coordinator of the Joint Commission with all relevant partners.

The EU expresses its serious concern that the Democratic People’s Republic of Korea (DPRK) continues action to further develop its illegal nuclear weapons and ballistic missile programmes. The EU calls on the DPRK to take concrete steps in dismantling its weapons of mass destruction, ballistic missile and existing nuclear programmes in a complete, verifiable and irreversible manner as decided by United Nations Security Council Resolution 2397 (2017). The EU urges the DPRK to engage in meaningful discussions with all relevant parties to build a basis for sustainable peace and security and to take steps aimed at pursuing complete, verifiable, irreversible denuclearization of the Korean Peninsula.

The EU reaffirms its support for the inalienable right of all Parties to the NPT to develop research, production and use of nuclear energy for peaceful purposes without discrimination and in conformity with the NPT.

The EU underlines that gender equality and the empowerment of women and girls is a top horizontal priority and believes it is important to integrate gender perspectives into discussions across the three pillars of the NPT. The EU fully supports and promotes the equal participation of women and men in the field of disarmament, non-proliferation and arms control.

* North Macedonia, Montenegro and Albania continue to be part of the Stabilisation and Association Process.