23.06.2022 Press and information team of the Delegation to the UN in New York 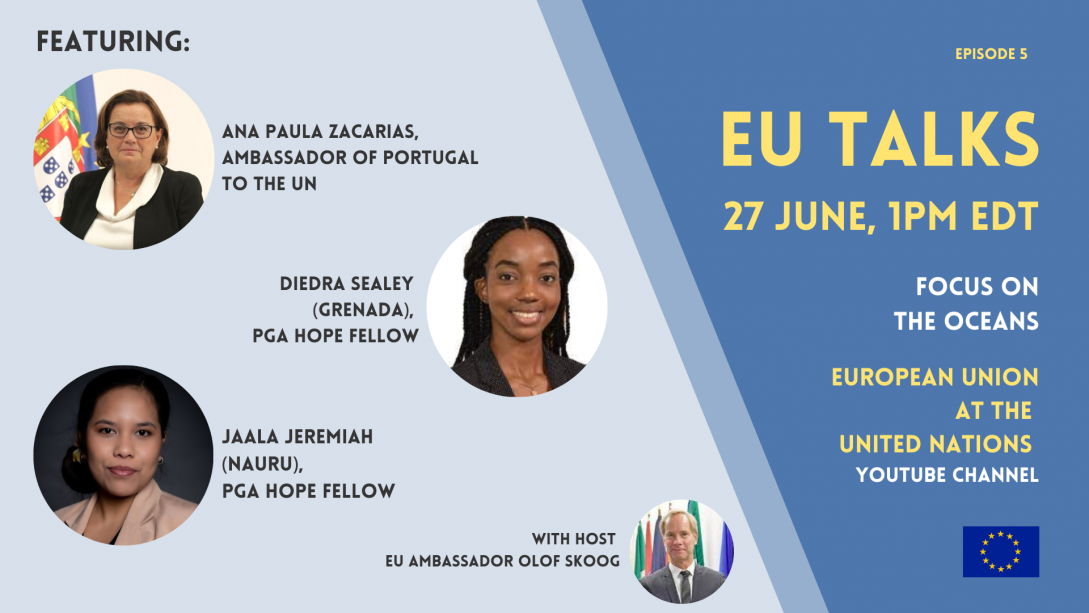 The fifth episode covers Oceans, in the context of the 2022 UN Ocean Conference held in Lisbon and co-hosted by the governments of Kenya and Portugal. The conference will take place from 27 June to 1 July 2022 and seeks to mobilize action and develop solutions to protect our oceans. This includes prioritizing science-based methods to tackle the effects of the climate crisis and achieve Sustainable Development Goal 14: Life Below Water.

In this episode, participants will discuss what actions are needed to protect marine environments and the communities that depend on them. They will also explore how youth can be effectively included to make an impact.

EU Talks is honoured to host Ana Paula Zacarias, Permanent Representative of Portugal to the UN. Previously, Ambassador Zacarias served as Portugal’s Secretary of State for European Affairs and Head of Delegation of the EU Delegations in Colombia and Ecuador. Additional special guests include Diedra Sealey of Grenada and Jaala Jeremiah of Nauru, youth participants in the UN PGA Fellowship for HOPE Programme. Ms. Sealey previously served as a Foreign Service Officer in the Ministry of Foreign Affairs, International Business and CARICOM Affairs of Grenada. Prior to becoming a PGA Fellow, Ms. Jeremiah served as Director for Water Resource Management in the Department of Climate Change and National Resilience of the Republic of Nauru.