29.04.2022 Press and information team of the Delegation to the UN in New York

29 April 2022, New York – The European Union Delegation to the United Nations in New York premieres the second episode of EU Talks, hosted by Ambassador Olof Skoog on Monday, 2 May. 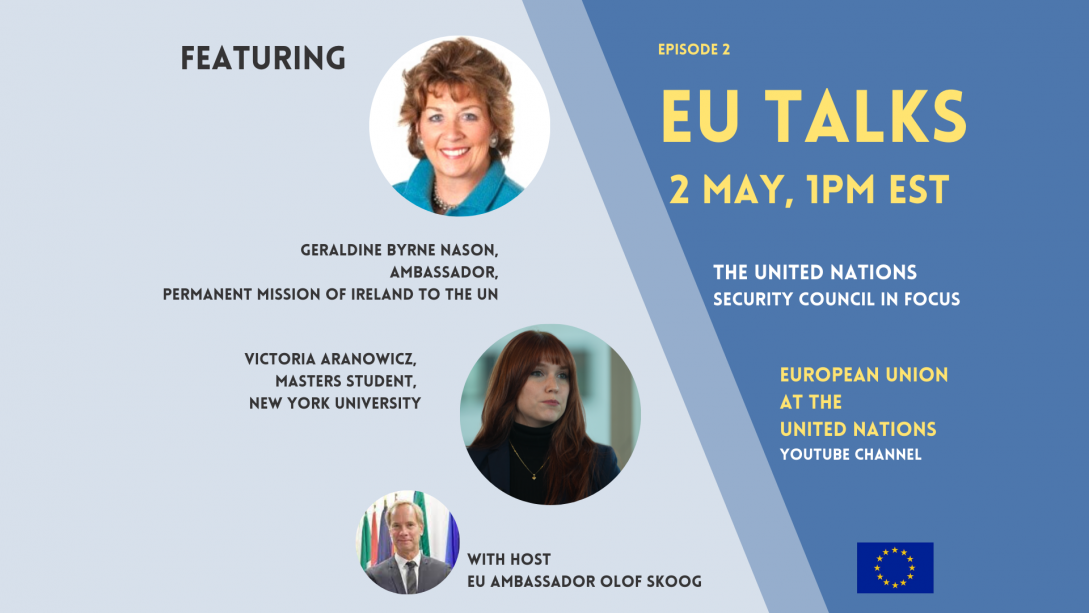 The second episode covers the Security Council, one of the six principal organs of the United Nations. The UN Security Council, comprised of five permanent and 10 elected members, has the responsibility of maintaining international peace and security. The Council upholds this responsibility by holding regular meetings and negotiations when addresses conflicts and the issues that impact peace and security such as climate change, women’s rights, human rights, health crises and more.

As of 2 May 2022, two EU Member States are members of the Security Council, France and Ireland. The EU Delegation also briefs the Council regularly. In 2021 the EU delivered more than 20 statements at the Council.

In this episode, EU Talks, hosted by Ambassador Olof Skoog, welcomes the Permanent Representative of Ireland to the United Nations, H.E. Geraldine Byrne Nason, a seasoned diplomat with extensive experience in the UN, and whose country is a member of the Security Council for 2021/2022. The other special guest is Victoria Aranowicz, who is completing a Masters degree at the Center for European and Mediterranean Studies at New York University. Ms Aranowicz is passionate about world politics and human rights, specifically women’s and girls’ rights.

Europe Day NYC: Empire State Building to be lit in blue and yellow on May 8th

International Day for the Elimination of Racial Discrimination: Declaration by the High Representative on behalf of the EU