24.05.2022 Press and information team of the Delegation to the UN in New York 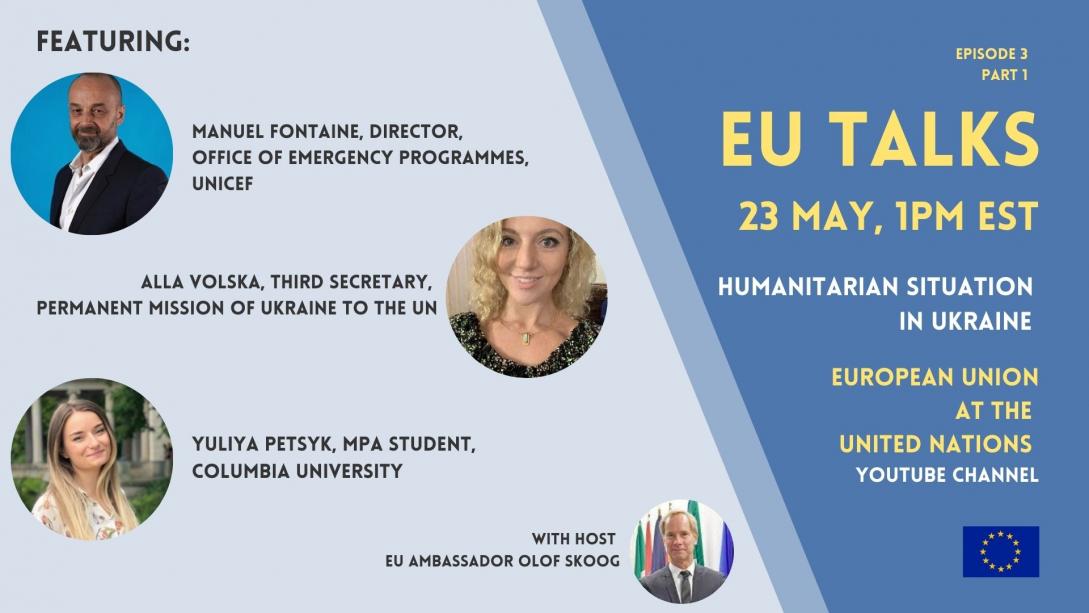 The European Union Delegation to the United Nations in New York premieres the third episode of EU Talks, hosted by Ambassador Olof Skoog. Episode 3 will be split into two segments and covers the humanitarian situation in Ukraine. Part 1 will be live on the EU Delegation to the UN YouTube Channel as of 1pm on 23 May 2022, and Part 2 as of 1pm on 24 May.

Since Russia’s invasion of Ukraine on 24 February 2022, a humanitarian crisis has developed in the country. According to the UN OHCHR, more than 5.6 million refugees have fled Ukraine since the beginning of the invasion — over 50% of them are children — and at least 7.7 million people are internally displaced [as of 2 May 2022]. Those who remain face a dire lack of supplies, including food, water and medicine.

Participants will discuss the overall situation and explore possible remedies to the crisis. Issues surrounding the invasion have been discussed at the UN since the beginning of the war, however this discussion will focus on the experiences of those directly affected, in a more informal manner.

This episode of EU Talks, hosted by Ambassador Olof Skoog, welcomes Manuel Fontaine, Director of the Office of Emergency Programmes at UNICEF, who has over 25 years of experience of leadership in development and emergency contexts. Other special guests are Alla Volska, Third Secretary at the Permanent Mission of Ukraine to the United Nations and previous member of the Administration of the President of Ukraine, and Yuliya L. Petsyk, a MPA student at Columbia University, who previously worked with the OSCE and UNDP in Ukraine.

Part 1 will provide an in-depth look at the personal experiences of guests Alla Volska, and Yuliya Petsyk. Part 2 will expand on the situation on the ground, with insights from Manuel Fontaine of UNICEF, who recently visited Ukraine.