On 21 September 2022, in the margins of the 77th UN General Assembly, the European Union Delegation and the Permanent Mission of the Czech Republic with the Czech Presidency of the Council of the European Union will co-host a high level side event on Violations of Human Rights Online 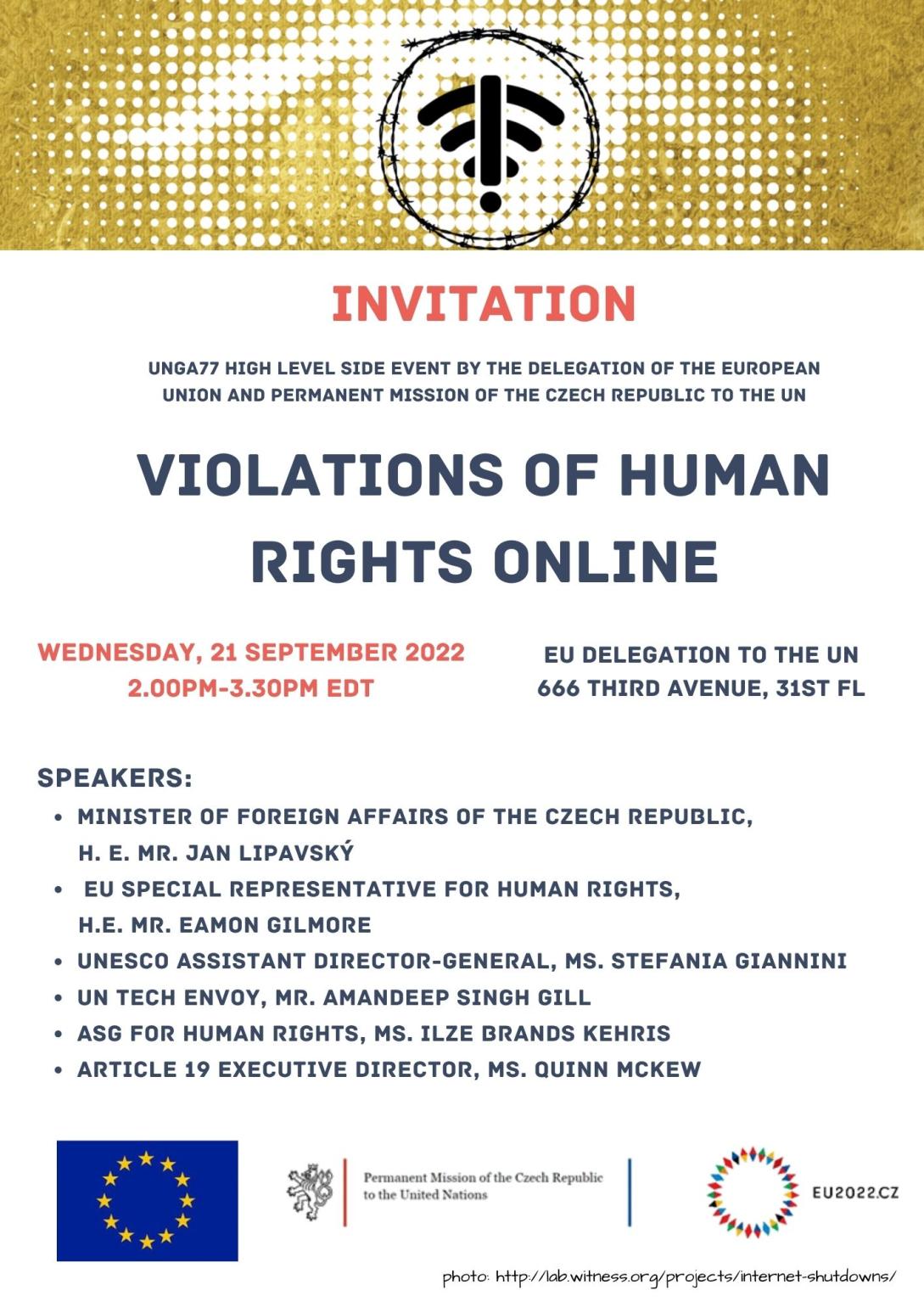 Digital technologies play an increasingly important role in today's world. It is indisputable that they impact, both positively and negatively, the functioning of societies, the rule of law and the exercise of human rights and fundamental freedoms. With estimated 4.9 billion users[1], the internet has become an integral part of our daily lives. While access to the internet is without a doubt an indispensable enabler of a broad range of human rights, including freedom of expression and opinion, peaceful assembly and association, as well as of the rights to education, health and many other rights, it is also being increasingly used as a tool for oppression and human rights violations. Digital technology can be used to spread hateful online content and disinformation, as well as misused for mass surveillance programmes, internet shutdowns and censorships, resulting in intrusions of privacy. Such misuse of cyberspace not only impacts the full, equal and meaningful enjoyment of human rights of each individual, it can be in some cases even life-threatening for individuals, such as journalists and media workers, or human rights defenders. It is essential that the states not only refrain from using harmful practices, but also actively protect and promote human rights and fundamental freedoms, including online.

Governments’ blocking of the internet, banning of access to major communication platforms, throttling of bandwidth for internet and mobile services have not only negative consequences for real life but also restrict the fundamental rights of people, first and foremost their freedom of expression. The #KeepItOn coalition, which monitors shutdown episodes across the world, documented 931 shutdowns between 2016 and 2021 in 74 countries, with some countries blocking communications repeatedly and over long periods of time. A report released in June 2022[2] by OHCHR underlines that “shutdowns are powerful markers of sharply deteriorating human rights situations,” being often imposed during heightened episodes of political tensions. In June 2022, the EU and OHCHR have launched a joint campaign on internet shutdowns.

Next to internet shutdowns, the adoption of draconian new laws targeting media, individual journalists and bloggers in a number of countries, together with intimidation and violence, further restricts freedom of expression.

The UN system is aware of these multiple challenges. The future Global Digital Compact needs to be fully in line with existing human rights standards and contribute to ensuring a human rights-based approach to the digital space, placing the individual at the center.

Against this backdrop, the high-level side-event to be held on the sidelines of the High-level Week of the 77th session of the UN General Assembly, will provide an opportunity to discuss the violations of human rights online in the world in 2022. The panelists representing states, international organizations and civil society will elaborate on the ways the UN system, states and civil society actors can promote and protect human rights online. The event will be organized in an in-person format. After the event, the recording of the event will be made available on a streaming platform.