05.05.2022
Brussels, Belgium
Administration Team of the EU Delegation to the United States 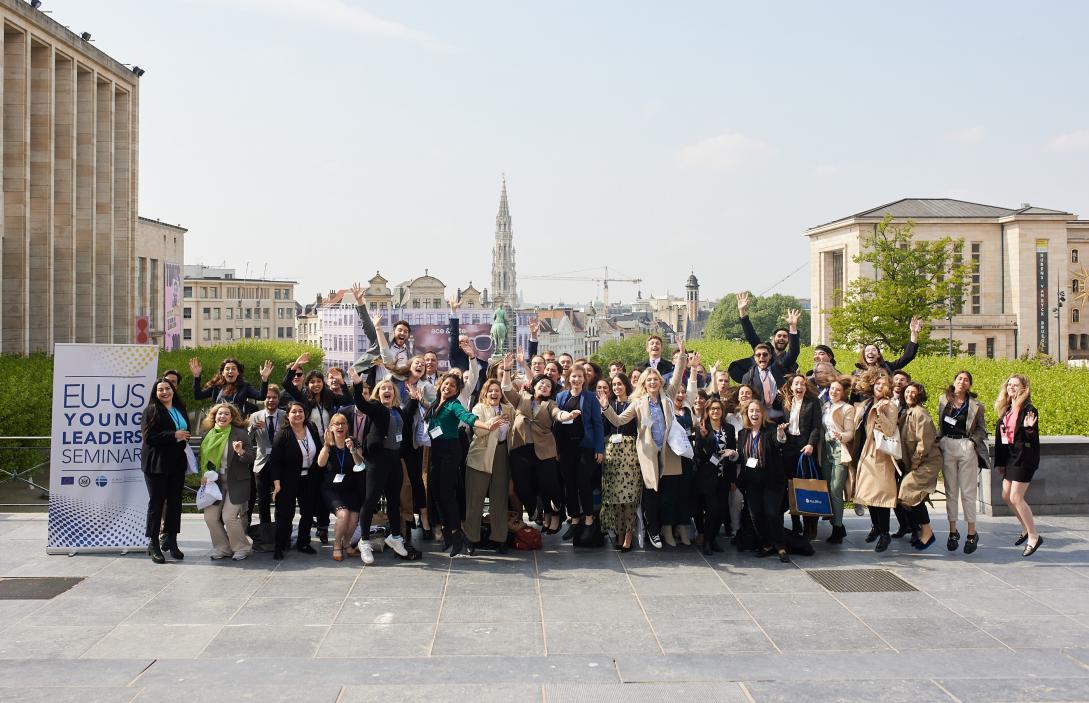 Fifty young transatlantic leaders gathered in Brussels, Belgium, in April for the fifth edition of the EU-US Young Leaders Seminar (YLS). The initiative, jointly funded by the European Union and the United States, provides a unique opportunity to discuss some of the most important global challenges and the creation of strong transatlantic people-to-people connections.

Over the course of three days, and as the EU and the United States are jointly addressing Putin’s aggression in Ukraine, this year’s diverse group of participants focused on timely discussions and interactive workshops on the future of democracy. The young leaders were particularly interested in the challenges of upholding rule of law and fighting against disinformation. In the current political context, they also considered the continuing relevance of the spirit behind the Marshall Plan as we approach its 75th anniversary.

The program included panel discussions with speakers from both sides of the Atlantic, including experienced professionals from EU institutions, think tanks, and academia, as well as a memorable visit to the residence of the U.S. Ambassador to the EU.

“You must bring young leaders together to have transatlantic discussions to really see what the differences are, but also what are the similarities,” said Erica Lutes, the Executive Director of the Fulbright Belgium, Luxembourg, and Schuman Programs. The Fulbright Commission in Brussels facilitates the academic exchange of thousands of students, researchers, teaching assistants, and professors between the United States and Belgium, Luxembourg, and the EU. According to Lutes, “to have these in-person events, to bring those bridges together today is vital.”

The participants - students and alumni from both EU and U.S.-funded educational exchange programs - came from a multitude of different fields, including political science, education, astronomy, and history. The multidisciplinary approach enabled the participants to dive deeply into current global policy challenges and explore creative solutions.

“Usually, when you study for your master’s, people are interested in the same topic. Here, people have different types of interests and come from completely different fields,” participant Esther Theisen, a student of the Erasmus Mundus Joint Master’s program said. “It is incredible to get that kind of input.”

Accompanying the group, Alexandre Polack, First Counselor at the EU Delegation to the U.S. said: “This unique people-to-people exchange could not have been timelier in the current context marked by Russia’s invasion of Ukraine and joint transatlantic response as well as efforts to promote democracy worldwide. These students from both the EU and the U.S. have so much to bring to the table in terms of what it is we should do to protect and reinvent democracy and reinforce its resilience worldwide.”