09.05.2022 Administration Team of the EU Delegation to the United States 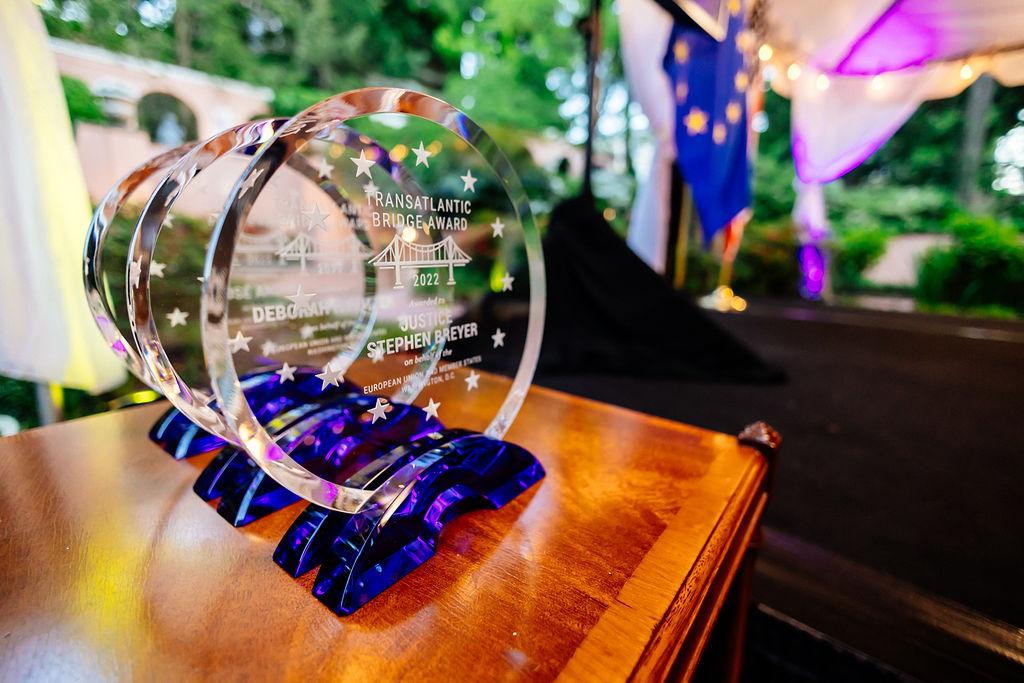 Photos from the event can be viewed here.

The three awardees - José Andrés, Chef, Humanitarian and Founder of World Central Kitchen; Stephen Breyer, Associate Justice of the Supreme Court of the United States; and Deborah Rutter, President of the John F. Kennedy Center for the Performing Arts - were honored at a Europe Day celebration held by the European Union Ambassador and the 27 EU Member State Ambassadors at the EU Residence in Washington, D.C.

“The unified allied response to Putin’s aggression in Ukraine has once again highlighted the enduring importance of the shared values of the transatlantic partnership,” said European Union Ambassador to the United States Stavros Lambrinidis. “Strong EU-U.S. relations are vital in addressing common global challenges. That’s why I am particularly happy to recognize with the first Transatlantic Bridge Award three exceptional Americans who have made invaluable contributions to the EU-U.S. relationship and to universal human rights and values.” As a world-renowned chef, humanitarian and founder of World Central Kitchen, José Andrés personifies and serves as a shining example of the European Union’s core values. Feeding those most in need and creating culinary training programs to empower communities and strengthen economies, he and his team go above and beyond the call of duty in global disasters and emergencies. Today, they are on the frontlines of the war in Ukraine, delivering care and kindness in meals in the country and to those fleeing the war. As a European and as an American, he bridges the Atlantic through food, highlighting its importance nutritionally, socially, and culturally, and connecting it back to urgent global issues like climate change.

On the Supreme Court of the United States, Justice Breyer has been an ardent defender of judicial independence and the rule of law in democratic societies, embodying and fortifying cardinal European values as well. He has promoted a robust exchange of ideas between the Supreme Court and the European Court of Justice and has consistently and effectively encouraged transatlantic legal dialogue on key issues. In addition to his rule-of-law leadership domestically and internationally, he has argued forcefully against the constitutionality of the death penalty in the United States, consistent with the EU’s position of opposing capital punishment in its member countries and around the world.

Under Deborah Rutter’s leadership, the Kennedy Center has been an unwavering supporter of European artists, strengthening the EU’s “Kids Euro Fest” partnership in the United States, first established in 2008, hosting each year numerous EU Member State productions on the Millennium Stage, and showcasing many European ballet and contemporary dance companies in one of America’s pre-eminent cultural venues. She has attached high priority to welcoming DC school groups for EU-related workshops and, through The Reach, making cultural experiences accessible to all, regardless of economic status. With her support for fundamental values and for celebrating unity in cultural diversity - ideals that are also the bedrock of the EU itself and of the transatlantic relationship - she greatly contributes in enriching humanity long into the future.

Europe Day celebrates peace and unity in Europe. The date marks the signing of the Schuman Declaration on May 9, 1950, which set out the idea for a new form of political and economic cooperation in Europe, and is considered the beginning of what is now the European Union.