The coronavirus has not only Europe but the entire global community in its grip and is the world’s common enemy. An enemy we can only defeat with a global approach and cross-border coordination. And while we have to mobilise all our resources to fight the virus at home, now is also the time to look beyond our borders, most specifically at our sister continent Africa and the Southern Neighbourhood, as well as at the Western Balkans, the Middle East, and parts of Asia, Latin America and the Caribbean. Because solidarity cannot be an empty word and also because for as long as the virus will not be eradicated everywhere, it will remain a threat to all of us. 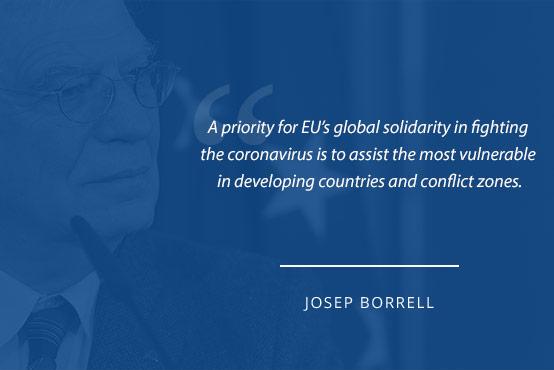 The first priority to manifest EU’s global solidarity is to assist the most vulnerable in developing countries and conflict zones. Such as the 70 million forcibly displaced people around the world, many of whom find themselves caught between war and the pandemic. Or countries with  weak health care systems, without access to clean water for all, without functioning safety nets and where conflicts have destroyed  infrastructure. In such environments, the consequences of the pandemic risk being devastating. This is particularly the case in Africa.

Think about what it means to practice social distancing or to stay at home in the slums around the world. When you have to make your living every day in an informal economy, staying at home can mean starving. As Ricardo Hausman, Economist at the Kennedy School said: if you have a 10 % chance of getting infected when going out to look for your daily income or a 100 % chance of starving if you stay at home, the answer is not hard to find. Workers in the informal economy represent between 50% and 80% of the working population in some developing countries. That’s why the third of the world’s population, living in overcrowded shantytowns, is most threatened by the pandemic. In such conditions, the urgency of the economic response to the health crisis is vital.

Let us look at some data to underline the fragility of the health systems of certain countries. In Europe, we have on average 35 times more doctors per head than in Africa, where public hospitals have on average only 1.8 beds per 1,000 inhabitants (in Europe it is ca. three times as much). Not to mention intensive care units, or equipment like respirators.

While in developed countries the health crisis precedes the economic crisis, for many developing countries the order is reversed. According to a report published by the World Bank two days ago, the pandemic has set off the first recession in Sub-Sahara Africa in 25 years. Some countries already face a massive flight of capital, a fall in income from tourism or raw materials, in particular oil, and a fall in remittances. Foreign capital withdrawals from emerging countries is already exceeding 60 billion dollars this year, which is double the level of the 2008-2009 financial crisis. In sum, the combined effect of the health and the economic crisis is already a reality and risks becoming even more catastrophic.  For all these reasons, we have been working this week at the European Commission and the European External Action Service to launch, together with EU Member States and financial institutions, a 20 billion euro package to support our partner countries to combat the coronavirus pandemic and its consequences. The “Team Europe” package has the aim of supporting the most vulnerable countries and people most at risk, in the EU’s neighbourhood, with special emphasis on Africa, and also in the Pacific, in Latin America and the Caribbean. Unfortunately, we are at the end of the EU’s seven-year budget cycle and this meant that we had to reorient existing resources. The package combines resources from existing programmes (some 11 billion euro), plus support from financial institutions such as the European Investment Bank and the European Bank for Reconstruction and Development (5 billion euro), and from EU Member States (4 billion euro).

Let me give some examples of this financial support: 50 million will go to Nigeria to contain the spread of the virus; 240 million euro will go for Jordan and Lebanon to support vulnerable local households and Syrian refugees; 10 million euro to help Ethiopia increase the number of diagnostic laboratories, test kits and treatment centres. We have foreseen 8 million euro for protective equipment, lab material, staff treatment and vaccines for the Caribbean and the EU already mobilised funds amounting EUR 38 million euro for immediate support to the health sector in the Western Balkans.

The effects of the corona virus crisis will be uneven, often hitting those already below the poverty the hardest. Furthermore, the pandemic highlights gender inequality in all its forms. Women and girls are particularly exposed with some countries reporting that domestic violence has doubled since the crisis begun. At the same time, many women’s jobs and businesses – already  precarious at the outset of the crisis – are disproportionately at risk. Moreover, women do far more care work than men. According to some estimates, women constitute almost 70% of the healthcare workforce, putting their lives at risk when treating corona patients.

Together with the UN, we are alerting governments and civil society to the spike in violence against women. We are also offering concrete help to scale-up existing hotlines and equipping teams in the health, police, justice and social protection sectors for women and girls.

Too often, children are the hidden victims of this pandemic, facing a heightened risk of exploitation, violence and abuse. The closure of schools is not only limiting their access to learning, but also to school nutrition programmes and clean water. UNICEF has warned that the risk of abuse of girls and boys are greater than ever before. Through our longstanding partnership with UNICEF, we have enabled assistance in over 60 countries to work on child protection, education in emergencies and psycho-social support.

COVID-19 also risks increasing the risk of hate speech and incitement of violence against already vulnerable groups and minorities. We must prepare to combat increased stigmatisation, hate speech and xenophobia. That is also why our efforts to tackle disinformation around the pandemic are so important.

The EU, together with its 27 Members States, is a forceful defender of a coordinated multilateral response. We have wholeheartedly embraced the UN Secretary General’s call for a global cease-fire and we are actively helping to prevent escalation of violence during the pandemic. This week’s Team Europe package to assist our partners and protect the vulnerable, forms part of this continued effort. Next week we will bring this message to the G20.