The Belgrade-Pristina dialogue is starting again

Yesterday, I had the pleasure to host – together with my new EU Special Representative Miroslav Lajcak – President Vucic of Serbia and Prime Minister Hoti of Kosovo for the first physical meeting after twenty months in of the EU-facilitated Belgrade-Pristina Dialogue. 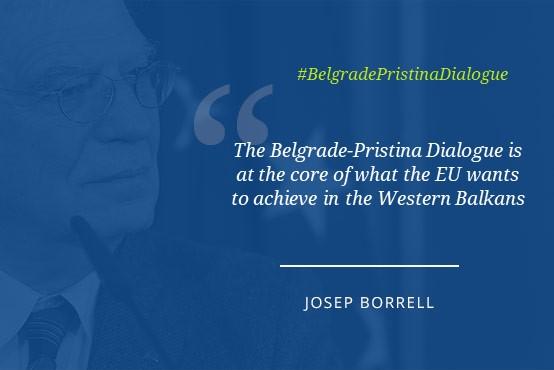 An important moment for the EU

It was an important moment for me and the European Union. The Dialogue, which the EU started to facilitate in 2011, is at the core of what we want to do in the Western Balkans. During my hearing before the European Parliament I told that I will consider it one of my top priorities. The European Parliament strongly supported this prospect. During my first Foreign Affairs Council, I then proposed the appointment of the EU Special Representative Miroslav Lajcak.

I would like to thank also, President Macron and Chancellor Merkel for their strong message of support to the Belgrade-Pristina Dialogue by convening the Paris Summit. They gave the process the last push to start again. Thank you.

Intense discussions on not easy subjects

We spent the whole of yesterday’s afternoon and early evening in intense discussions with the two partners. These were not easy discussions. The subjects – missing persons, displaced persons – are highly emotional issues and they are essential parts of reconciliation.

We also discussed economic cooperation, which for me is about the future relationship of Kosovo and Serbia. They belong to the same region and they are travelling to the same destination – Europe.

In the future, their people, capital, and goods should move freely. They should also work together to develop their economy and their infrastructure. This is to the mutual benefit of both and the EU has put a lot of effort into creating the framework for such cooperation.

Our work with President Vucic and Prime Minister Hoti is only just starting.

We have a lot to accomplish together for the good of Serbia, Kosovo and the European Union.

I respect the fact that yesterday, they presented their positions honestly and constructively even while there were disagreements. I was impressed by the fact that they were ready and eager to continue the work. We have asked them to send their team already next week, so we don’t waste time.

And we will meet with President Vucic and Prime Minister Hoti in September. I look forward to working with them and I am very glad that we can count on the long diplomatic experience of the EU Special Representative Miroslav Lajcak for this complicated task. We have a lot to accomplish together for the good of Serbia, Kosovo and the European Union.