From growing onions in the sand, beekeeping to preserve wildlife, building homes from plastic bottles, to solar parks and other initiatives to switch to green: such concrete actions, big or small, help to mitigate climate change. Yet there is a need for drastic action. Climate action is at the heart of the European Green Deal – from ambitiously cutting global emissions, to investing in research and innovation, to preserving the natural environment. 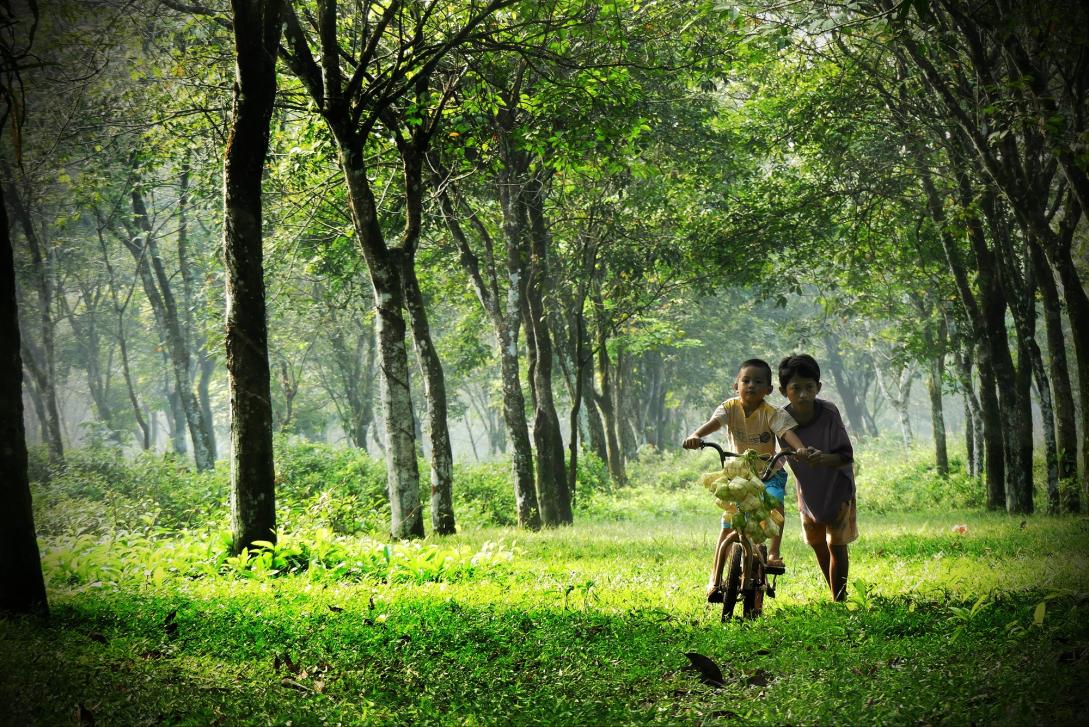 Climate change and environmental degradation are an existential threat to Europe and the world. Global climate action still falls short of what is required to achieve the long-term goals of the Paris Agreement and 2030 Agenda for Sustainable Development.

Worldwide, greenhouse gas emission reductions have been recorded due to the impact of the COVID-19 pandemic, but this has not been enough to be considered sustainable.

The European Green Deal sets ambitious goals aiming to transform the EU into a climate-neutral, fair and prosperous society, with a modern, resource-efficient and competitive economy. However, since the EU accounts for an 8%, and decreasing, share of global emissions, ambitious internal policy will not be enough. The Council calls for urgent, collective and decisive global action to hold the increase in the global average temperature to the Paris Agreement mitigation goal.

The Paris Agreement provides the indispensable multilateral framework governing global climate action. The EU welcomes the pledges made at the recent Climate Ambition Summit 2020 organised by the United Nations, France and the UK, in partnership with Italy and Chile, and calls on all countries to develop ambitious and detailed short and medium-term pathways, targets and policies that align with their long-term goals as a way of providing clear signals to citizens, political actors and businesses.

The EU urges all countries to also align their trade promotion, finance, aid and foreign investment strategies with their domestic climate pledges and Paris Agreement commitments, and to institute sustainable and climate sensitive economic recovery policies from the COVID-19 crisis.

The EU will work, as a matter of priority, with non-EU G20 and other major economies on climate change mitigation efforts. It stresses the need for ratification of the Paris Agreement by all who have not yet done so, and welcomes the declared intention of the new US Administration to re-join the Paris Agreement and looks forward to revitalising the EU-US Energy Council with an increased focus on energy transition and climate action.

The Council recognises that climate change and environmental degradation, including biodiversity and forest loss, are a threat to international stability and security, reinforcing disaster risks and pressures on ecosystems, posing challenges to food and water security, provoking local and regional conflicts while exacerbating the risk of the displacement of people, thereby constituting a major driver of humanitarian needs and threatening the effective enjoyment of human rights.

The EU will continue to support those most in need, seeking to limit and manage the risk of further loss and degradation through policy support, financing and an exchange of best practices, promoting, among others, nature based solutions. The EU welcomes, in this regard, the 2021 Climate Adaptation Summit that is currently taking place, hosted by the Netherlands. EU and Member States will work with partners, including the UN, to develop conflict prevention measures, such as early warning systems and support relevant international instruments, such as the Sendai Framework for Disaster Risk Reduction.

The Council emphasises the importance environmental issues and climate change have for security and defence, and welcomes the Climate Change and Defence Roadmap: EU Actions addressing the links between climate change and defence, including in the context of the Common Security and Defence Policy, contributing to the wider climate and security nexus.

The transition of the energy sector, responsible for over two-thirds of global greenhouse gas emissions, is central to the path towards climate neutrality. EU energy diplomacy will aim – as its primary goal – to accelerate the global energy transition, while ensuring affordability, safeguarding the environment and achieving the Sustainable Development Goals. To this end, in view of the need for a rapid shift toward climate neutrality, EU energy diplomacy will promote energy efficiency, the deployment of safe and sustainable low-carbon technologies, the increasing uptake and system integration – including through increased interconnections – of renewable energy, and the highest environmental, nuclear safety and transparency standards.

The EU will ensure that its trade policy and its trade agreements are consistent with its climate ambition. The Council acknowledges that the Commission has proposed, with the European Green Deal Communication of December 2019, to make the respect of the Paris Agreement an essential element for all future comprehensive trade agreements. The Council welcomes the initiative of the Commission in the WTO context to ensure multilateral trade rules support the global transition towards a climate neutral and resilient economy.

Investment into fossil fuel based energy infrastructure projects in third countries will be discouraged, unless fully consistent with an ambitious, clearly defined pathway towards climate neutrality in line with the long-term objectives of the Paris Agreement and best available science. The EU also calls for a global phase-out of environmentally harmful fossil-fuel subsidies including a phasing out of unabated coal in energy production and – as a first step – an immediate end to all financing of new coal infrastructure. The EU will support international efforts to reduce the environmental and greenhouse gas impact of existing fossil fuel infrastructure, including non-CO2 emissions, such as black carbon. In this context, the Council underlines the need to mitigate the impact of climate change in the Arctic region, which is particularly affected. In addition, the EU will pursue, as a priority, international initiatives on reductions of methane emissions.

EU diplomacy will scale up efforts to counter disinformation campaigns against the energy transition, within the EU and globally. The EU and its Member States will continue to support the uptake of the EU’s energy acquis, rules and standards, as well as further energy market integration and interconnectivity in line with the European Green Deal, particularly within the EU’s neighbourhood, including the Eastern Mediterranean. The EU will support the ambitions and efforts of countries in the Southern Neighbourhood, Western Balkans and the Eastern Partnership in tackling environmental, climate and energy challenges.

The EU will continue to address energy poverty, building, where possible, on the Team Europe approach. As a priority action, the EU will work with African partners in accordance with the Joint Communication “Towards a comprehensive Strategy with Africa” and develop a strategic and coordinated approach on the energy partnership with Africa, launching an African Union-EU Green Energy Initiative, which should support universal sustainable energy access ambition for Africa; as well as launching the “NaturAfrica” initiative to promote nature conservation, boost job opportunities and help tackle the illegal exploitation of natural resources and biodiversity loss in Africa.

The EU also underlines the importance of enhancing the voice and participation of young generations on policy and practice related to climate, energy and the environment, welcoming the “Youth4Climate: driving ambition” event to be hosted by Italy in September 2021.

The Council invites the High Representative and the Commission to reinforce further the external dimension of the European Green Deal, to make appropriate capacity available, and to strengthen – together with the Member States – coordination and information exchange through, among others, the EU Green Diplomacy Network and the Energy Diplomacy Expert Group. In the run-up to COP 26, EU Delegations and Member States’ Embassies shall increase their outreach and cooperation in a TEAM Europe approach, further projecting the EU’s commitment and leadership in this field.

From the annual global #EUBeachCleanUp, the #BeTheWave campaign that was launched last year, and joining initiatives to #MoveTheDate of Earth Overshoot Day, amongst many more, to funding projects for the mitigation of climate change, the EU is there to support climate action around the world. The stories below are testimony to this, but only reflect a very small window of the bigger picture of what the EU is doing. Although every action matters, the EU Green Deal aims to trigger more and more ambitious and concrete stories of global climate action to achieve the long-term goals of the Paris Agreement.

- Growing onions in the sand of Mauritius

Belle Mare is a small village situated on the eastern coastal side of the island of Mauritius. Residents are mainly small planters highly vulnerable to a high incidence of pests and disease due to climatic conditions such as high temperature and humidity, and climate extremes, such as drought and high-intensity rainfall. Fifteen small planters were selected and are beneficiaries of a project for the transformation of Belle Mare into a Climate-Smart Agriculture village, supported by the EU-funded Global Climate Change Alliance Plus (GCCA+). Each of them received water tanks, sprayers for biopesticides and tillers. The final goal is to set a trend to promote sustainable livelihood, enhancing national food security in a productive, climate-resilient, environment-friendly way that produces lower levels of greenhouse gas emissions. Read the full story.

- Beekeeping to preserve wildlife in Tanzania

Across Tanzania’s Tarangire-Manyara ecosystem, more than 1,350 environmentally friendly beehives – hanging from giant baobab and acacia trees – represent much more than meets the eye. Installed by members of Tanzania People & Wildlife’s Women’s Beekeeping Initiative, these environmentally friendly hives help to preserve habitats for big cats and other wildlife while generating a sustainable revenue stream for rural women. This project is a part of the EU-funded 'IUCN Save Our Species' African Wildlife initiative. Read the full story.

Imbabura, Pichincha, Cotopaxi and Bolívar are four provinces of the Ecuadorian Andes where agriculture generates around 26% of employment and represents more than 20% of the income of its inhabitants. This is the scenario where the project "Andean Landscapes: Promoting the integrated management of landscapes for sustainable livelihoods in the Ecuadorian Andes" is implemented, seeking to improve the quality of life of the páramo communities, and responsibly manage the areas to avoid degradation of land and water sources. The project is part of a broader EU thematic program at global level for the environment and climate change. EU action for sustainable landscape management is linked to the Global Climate Change Alliance + GCCA + initiative that seeks to help developing countries face this challenge. Read the full story.

- First solar park project in Trinidad and Tobago kicks off “The times are really hard: due to the pandemic, I had challenges with selling my harvest this year. However, with the installed drip irrigation system, I was able to harvest and sell my melons even after all the other melon plots in the community ran out of produce,” stated Lali Sikhashvili, one of 700 farmers from all over Georgia who participated in training programmes organized by FAO in 2020 with the support of the European Union. Read the full story.

- Tateh, building homes from plastic in the Hamada

Ever imagined that the plastic bottle you've just disposed of could be someone's home...? At 28, Tateh Lahbib Braïka is the designer and builder of a new concept of ecological construction, that is both resistant and inexpensive, thanks to plastic bottles. Tateh was raised in the Aousserd camp where he was nicknamed "bottle-crazy" by the other refugees. “My neighbors were amazed to see me rummaging through the trash cans to retrieve the bottles,” he says wryly. Like the vast majority of Sahrawi children, Tateh's school career began in the camps and continued in Algeria. He obtained a license in Renewable Energies from the University in Msila, and eventually he joined an Erasmus program, where he studied energy efficiency at the University of Las Palmas in the Canary Islands. Read the full story.