HR/VP Blog – Central Asia’s geostrategic significance is increasing. This week I visited the region and participated in two important meetings in Samarkand: the EU-Central Asia Ministerial meeting and the EU-Central Asia Connectivity conference. As our Central Asian partners are looking to diversify their partnerships, they want more EU engagement. And certainly there is a lot more we can do together on connectivity, energy and security. 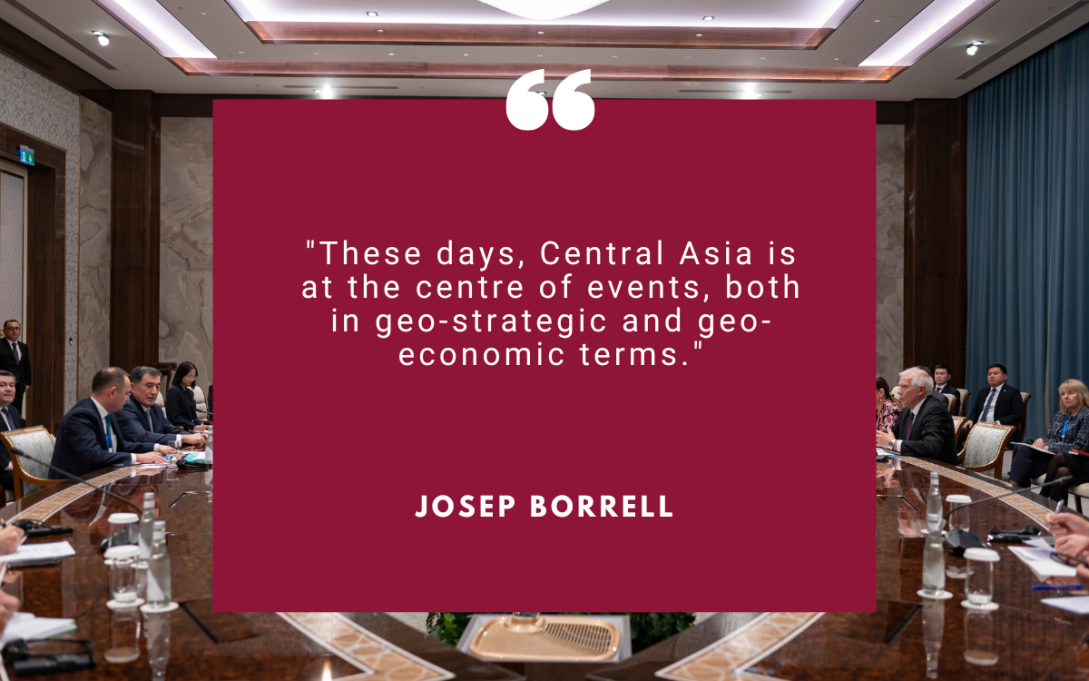 For centuries, Central Asia played a key role, linking the Far East to Europe when goods and ideas flowed back and forth along the Silk Road. But relations need to be nurtured and constantly updated in light of new circumstances. These days, Central Asia is at the centre of events, in geo-strategic and geo-economic terms.

It is obvious that the region is looking to diversify its relationships and that the EU is seen as a partner of choice.

When you travel to Central Asia, you feel there is a new dynamic. It is clear that Russia but also China have played a major role in the region and continue to do so. Equally, it is obvious that the region is looking to diversify its relationships and that they see the EU as a partner of choice. Leaders in the region are undertaking various reform programmes. In addition, relations among Central Asian countries are improving.

As EU, we have a clear interest to seize on these changes. We must deepen our ties with the region and tap into the vast potential it has to offer, in terms of energy supplies, critical raw materials and new transport corridors that do not depend on Russia (to so-called Middle Corridor or Trans Caspian Corridor).

Happily, we do not start from zero. Maybe not many people know it, but we are already the main investment partner of the region. The EU accounts for more than 42% of the total FDI stock in Central Asia, compared to 14,2% for the US, 6% for Russia and 3.7% for China. Moreover, we are about to mark 30 years of diplomatic relations. The key task is to build on these foundations and give a new impulse, while taking into account the fast changing geopolitical context.

I started my visit in Kazakhstan, a country of 20 million but with a surface that is five times France. With President Tokayev and Deputy Prime Minister and Foreign Minister Tileuberdi we discussed how to take forward the positive momentum we see in our relations, as evidenced also by the recent visit of President of the European Council Michel and the MoU signed by President of the European Commission von der Leyen on access to raw materials. Kazakhstan is a key partner for us, not least as a major source of oil imports (about 8% of our total imports) but also gas, uranium and other critical raw materials.

In political terms, Kazakhstan has seen various reforms that go in the direction of political pluralism. Today’s Presidential elections and next year’s parliamentary elections will be important markers in this respect. But there is a lot of progress needed and my meeting with key civil society leaders was a good occasion to hear first-hand their perspective and the work they do, with EU support.

Samarkand has a long history as trading post and ‘gateway’ between East and West - long before we started using the term Global Gateway.

I then moved on to Samarkand in Uzbekistan, by far the most populous country in the region. Samarkand has a long history as trading post and ‘gateway’ between East and West - long before we started using the term Global Gateway. Uzbekistan is also the birthplace of the notion ‘algorithm’, a term we now hear so much about in the world of IT and social media.

In Samarkand we held the 9th EU-Asian Central Ministerial, with all five Central Asian countries participating. We discussed the full range of issues between us. We agreed that there is a new momentum but also still a lot of untapped potential.

On the security side, we discussed the shockwaves that Russia’s invasion has caused. For obvious geographical and historical reasons, the region follows a balanced approach. But we were united on the need to defend key principles of the UN charter (territorial integrity, non-use of force etc.). And of course the region wants to minimise the negative effect of Russia’s war. Logically, the dramatic situation in Afghanistan also featured prominently where the humanitarian situation continues to deteriorate and the Taleban show no sign of moderating its behaviour.

We also discussed the water, energy and climate nexus; people-to-people exchanges and the role of the EU in supporting cooperation among Central Asian states and between our two regions. We agreed that in a world of rapid change, we need each other. We will work hard on the follow up towards the next EU-Central Asia Ministerial to be held in Brussels.

The strategic nature of Connectivity: where politics and engineering meet

In all discussions in Central Asia, the buzzword Connectivity tops the agenda. This is logical: the region sits strategically between East and West. However, generally speaking, existing transport and other linkages are under-developed. Many Central Asian countries lack access options to European and global markets that do not pass through or rely on Russia. They, like us, want to develop more, additional options and links.

Ultimately, connectivity is a combination of politics and engineering. It is about overcoming borders, which are scars of history, by building hard and soft infrastructure, or the veins through which pass flows of people, goods, services and ideas.

How to do this in practice was at the heart of the EU-Central Asia Connectivity Conference: Global Gateway, attended by political leaders from the region, the EU, financial institutions and business.

In my speech, I stressed the great potential of better linking our two regions and, with that, our peoples. Ultimately, connectivity is a combination of politics and engineering. It is about overcoming borders, which are scars of history, by building hard and soft infrastructure, or the veins through which pass flows of people, goods, services and ideas.

This may sound abstract. But with the EU’s Global Gateway and its global financing that is foreseen to be as much as €300 bn and by adopting a real Team Europe approach, we can turn lofty words into concrete actions and do so in a sustainable way.

However, for trade and investment to flow, we need solid rules and international law to be respected. What we call the rules based international order makes states secure, people free and companies willing to invest. That is the reason why I said that we all need to defend it when that order is under threat - as it is today.

Another key message was that we in Europe, like our partners in Central Asia, see the need to advance our strategic autonomy. So that we can all choose freely how and with whom we connect. Having connections and options is good. But excessive dependencies and the absence of choice can come at a heavy cost, as we learned the hard way over energy and Russia.

I had the feeling that the conference could be a foundational moment on what concrete solutions we can implement to boost connectivity within and between the two regions.

The EBRD is working on a study on sustainable transport corridors between Europe and Central Asia, looking at how to overcome the bottlenecks. Both in terms of hardware like railways that lack inter-operability due to different gauges, or the lack of logistic capacities in ships and in ports; but also in terms of software like customs procedures. There are certainly real obstacles but equally there is a joint commitment and strategic interest to overcome these obstacles, including through the support of the EU, the EBRD and the EIB.

At the conference, I also had the opportunity to launch two Team Europe initiatives, especially made for Central Asia:

As usual with this type of events, what matters is not only the event per se and the speeches and connections people make there but the follow up. The final communique is certainly full of important joint commitments that need to be implemented. On my side, I will work with my colleagues in the Commission and with EU member states to ensure it is not a standalone event but sets in motion a new dynamic.

Finally, I also met the President of Uzbekistan Mirzioyev in Tashkent. We discussed all the strategic issues that dominated my trip to the region and a good wrap-up of my visit. We discussed Russia’s war against Ukraine and its fallout and the growing instability in Afghanistan. But we also talked about the great potential in our bilateral relations and the upward momentum in EU-Central Asia relations and especially the strategic nature of our cooperation on connectivity.

I come away from this trip with a sense that the changes in the geopolitical landscape – the fall of Kabul and the war against Ukraine - require us to invest much more in our increasingly important partnership in and with Central Asia.