China, the United States and us

Every day we see deepening tensions between the US and China with clashes over a variety of issues. Positions are hardening with advocates of decoupling in the ascendancy in both Washington and Beijing. This US-China strategic rivalry will probably be the dominant organising principle for global politics, regardless who wins the next presidential US elections. In that context, we need to hold our nerve and frame our own EU approach. I would like to reflect here about a few principles that should guide us 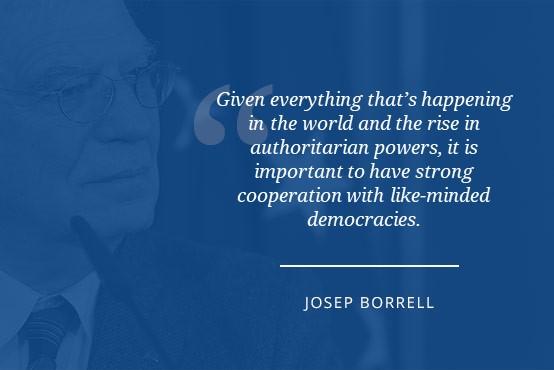 US-China strategic rivalry will probably be the dominant organising principle for global politics, regardless who wins the next presidential US elections. In that context, we need to hold our nerve and frame our own EU approach.

China is increasingly asserting itself on the international scene. This was already the trend before the current crisis, but the coronavirus pandemic has accentuated this. It has become more assertive – some even say aggressive - in its neighbourhood, especially in the South China Sea or on the border with India. Also, Chinese leaders did not hesitate to leave aside international commitments with the imposition of the Hong Kong National Security Law.

In the United States, the current administration has taken steps to "contain" China, in terms of trade and technology but also security. Some even talk about a new "Cold War", referring to the global competition between the United States and the former USSR after World War II. Of course, the circumstances are different this time, not least because the USSR was never the economic power that China clearly is today.

As for Europe, we need to be clear where we stand. I have said on various occasions that we must follow our own path and act in accordance with our own values and interests . This does not mean we should be equidistant from the two protagonists. Indeed, we share a long history with the United States, marked by the decisive support they gave to defeat Nazism, followed by their help to rebuild Europe. And we have worked together to build a Europe ‘whole and free’.

We are products of the "Enlightenment" period and share a political system: democracy, with the people holding government to account. In a way, we are ‘political cousins’: both are committed to political pluralism, individual rights, media freedom and checks and balances. In Europe and the US, elections matter - in China not so much. The combination of this shared history and shared values creates, a priori, a close affinity between us.

For its part, modern China was built on values and a political regime that are very different. And contrary to what many, particularly in Europe, had hoped, the economic development of China and the growth of its middle class has not resulted in a marked evolution towards democracy, with respect for individual rights, civil society and freedom to dissent. The idea of ‘convergence through trade’ has disappeared.

On the contrary, there has been less tolerance for dissent and a centralisation of power, particularly with regard to Xinjiang and Hong Kong. To respond to the serious situation in Hong Kong, the EU and its member states have just adopted a strong, coordinated response with concrete actions: restricting the sale of products that could be used for internal repression, the interception of internal communications or cyber-surveillance, plus decisions on visas and scholarships.

During the last years, China has undoubtedly become more powerful, but also somewhat friendless. People respect China, but many also fear it, as it uses economic coercion. As a result, the idea of a mighty, benevolent power is fading.

Where do we go from here? It must be clear that Europe still has an enduring interest to work together with China, even if difficult, on a number of global issues on which it plays a crucial role. China has necessarily to be part of global solutions to planet-size problems like tackling the COVID-19 pandemic or mitigating climate change. Unlike in Washington, in the European Union there is not apparent tendency towards a strategic rivalry that could lead to a kind of new “Cold War”, nor towards a broad economic decoupling.

Europe has an enduring interest to work together with China, even if difficult, on a number of global issues on which it plays a crucial role

However, with the US – and with other democracies – we do share a number of deep concerns on the substance of Chinese behaviour that must be addressed: the persistent lack of a level-playing field in the economic area; the distorting effects of industrial subsidies; the absence of reciprocity in procurement rules. The list is quite long. And our impatience is growing that despite Chinese commitments to address these concerns, there is insufficient follow through in terms of actual reforms.

These issues were all discussed in the 8th High Level Trade and Economic Dialogue (HED), which my colleague Executive Vice President Dombrovskis held on 28 July with Chinese Vice Premier Liu He. It was an important moment to discuss cooperation on the recovery and take stock of the state of play on the negotiations on a Comprehensive Agreement on Investment. For its part, the EU made clear that further steps and commitments are needed from China on market access, industrial subsidies, regulatory issues and other areas. We will review the situation again at the next leaders’ summit scheduled for mid-September.

In this triangular context, it is worth stating that the EU and US have recognised their growing interest in stepping up their dialogue on the China challenge. We want to emphasise the importance of analysing China’s global ambitions and challenges, enhancing coordination, and sharing information on our respective approaches.

That’s why in June I proposed to launch a high-level EU-US dialogue on this issue to Secretary Pompeo. I gave one example, among many: while the US is punishing Airbus and we prepare measures on Boeing, China is fully subsidising wide-body aircrafts which they will sell everywhere in the world, including to our own private companies. This has to be discussed in the dialogue. Work is already underway to agree modalities, with officials from Brussels and Washington meeting to set the basis for the dialogue.

Precisely because we agree with the US on many points on China, we regret that the chosen methods in terms of American foreign policy have lately so often been unilateral in nature, without consulting the EU and, at times, harmful in substance to EU interests. Whether it is by imposing tariffs on EU products, abandoning the JCPoA on Iran's nuclear programme, damaging global action against climate change by abandoning the Paris Agreement or sanctioning European companies involved in the Nord Stream project.

To sum up: given everything that’s happening in the world and the rise in authoritarian powers, it is important to have strong cooperation with like-minded democracies. The EU and US should be at the heart of this effort, but we should also be working closely with Japan, India, South Korea, Australia, New Zealand, Canada and others.