Climate change: the EU is ready to assume its global responsibility

HR/VP Blog - Extreme weather events in Europe and around the globe and the recently published IPCC report underline how much climate change threatens humankind. With its new climate law and the “Fit for 55” package proposed by the Commission, the EU is ready to assume its responsibilities ahead of COP26 in Glasgow. 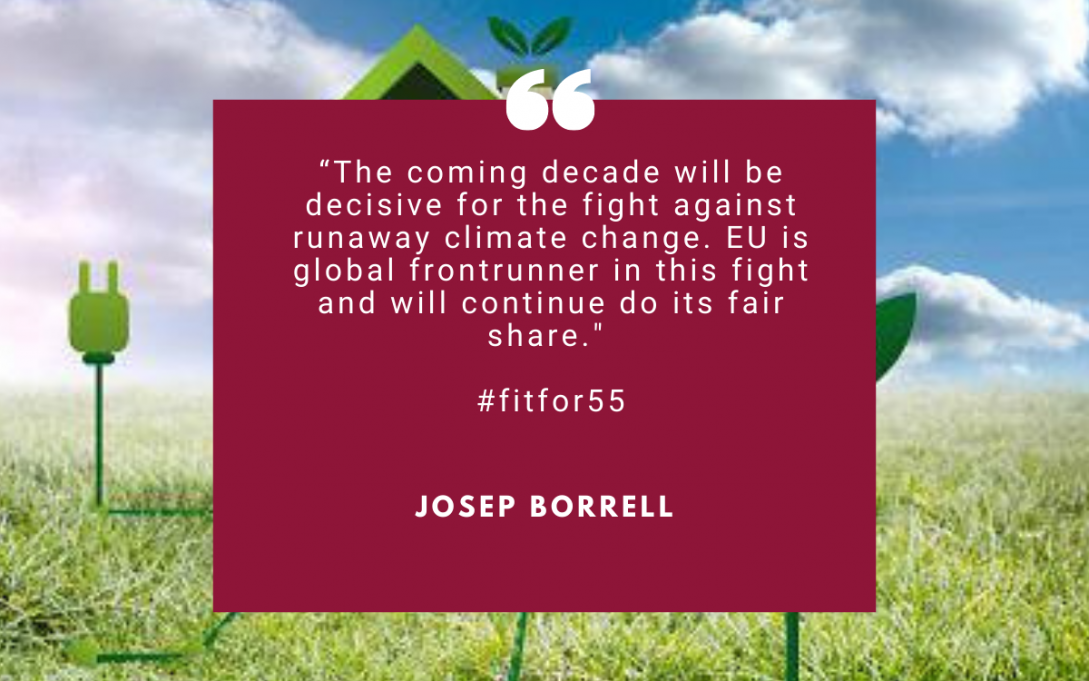 Just in the last weeks, the tragic toll from the severe floods in Germany and Belgium, the persistent wildfires in Greece and Turkey or at the West Coast of North America are just some stark reminders of how serious is the threat that we are facing. And the new Intergovernmental Panel on Climate Change (IPCC) report(link is external) published last Monday demonstrates the absolute urgency to cut greenhouse gas emissions steeply. With its major geopolitical implications, climate change is the single, most threatening security issue ever in human history: “the alarm bells are deafening, and the evidence is irrefutable. It is a code red for humanity” as UN secretary general Guterres put it.

“The coming decade will be decisive for keeping global warming below 2 degrees Celsius, as required by the 2015 Paris agreement.”

The coming decade will indeed be decisive for keeping global warming below 2 degrees Celsius, as required by the 2015 Paris agreement(link is external). “It’s not too late to stem the tide and prevent runaway climate change, but only if we act decisively now and all act together”, summarised my colleague EC Vice President Frans Timmermans in charge of EU climate policy. It is therefore essential that all countries strengthen their commitments and increase their efforts before the COP26 climate summit in Glasgow next November(link is external).

Over the last thirty years, the EU has been at the frontline of the global fight against climate change. An engagement, which is our duty: as one of the most economically developed areas in the world, we are among those who emit and have emitted in the past the most greenhouse gases responsible for climate change.

“Our engagement is a duty: as one of the most economically developed areas in the world, we are among those who emit and have emitted in the past the most greenhouse gases responsible for climate change.”

Against the backdrop of the accelerating climate crisis and to push others to take their full responsibilities ahead of COP26, the EU has adopted last June a new Climate Law. It makes climate neutrality by mid-century a legally binding commitment, and raises EU’s greenhouse gas emission reduction target from previously 40% to at least 55% in 2030, compared to 1990. It will be a tough task: by 2019, the EU's greenhouse gas emissions had fallen by 24% since 1990. This means that we need to reduce our emissions in the 2020s alone more than we have done in the previous 30 years.

Last year, we have seen the return of the US to the Paris Agreement and a number of major economies committing to a net zero emission pathways. Around 60% of the world’s emissions are now subject to an upgraded climate target for 2030. Not just the EU and the US are raising the bar, but also China, Russia and others recognise that ‘more must be done’. The challenge is now to make sure at the Glasgow summit that all major economies take ambitious enough, measurable and verifiable 2030 targets and climate neutrality commitments.

“Target setting is the easier part. Implementation is the harder and decisive part. The EU is now also walking the talk with the ‘Fit for 55’ package.”

However, target setting is the easier part. Implementation is the harder and decisive part. The EU is now also walking the talk with the ‘Fit for 55’ package, a set of thirteen legislative proposals to deliver the emission cuts aimed for, that the European Commission has put forward last July. Given that we represent only 8 % of global emissions, the EU wishes to assume leadership by example, with policy proposals able to inspire others to become equally ambitious and undertake similar structural economic transformation as embodied in our green deal.

At the root of the package lie three core ideas. First, the need to make the necessary emissions cuts in the most cost-effective way. Efforts will be asked from basically all sectors of the economy, be it through carbon prices, stricter regulations or higher targets for energy efficiency or the share of renewables in energy. Second, climate action is an engine of innovation and jobs creation, with decarbonisation as a major plank of our industrial policy. Third, energy transition should be fair, ensuring that the most vulnerable people and actors get the necessary help to adjust to the radical changes underway in transport, housing or employment.

“The Fit for 55 package is key for Europe future, but it also has wide-ranging global implications. Therefore, compliance with international trade and environmental rules has been a central concern in their design.”

The Fit for 55 package is key for Europe future, but it also has wide-ranging global implications. Therefore, compliance with international trade and environmental rules has been a central concern in their design. One of the proposals that could potentially affect most our partners is the introduction of a Carbon Border Adjustment Mechanism (CBAM). Its aim is to avoid so called “carbon leakage”, resulting from the relocation of production outside of the EU to countries with less stringent climate rules. This would cost the EU jobs without reducing global emissions. CBAM does so by putting a carbon price, reflecting their carbon content, on imports of a limited number of high-polluting goods, in the same way as these goods produced in the EU are subject to a carbon price through the EU’s emission trading system.

The Carbon Border Adjustment Mechanism does not target particular countries

The CBAM does not target particular countries, but specific goods. It conveys a policy signal to our partner countries to introduce carbon pricing at home and for foreign producers to lower the carbon contents of the products they export to the EU. The best outcome would be that the CBAM induces effective carbon pricing mechanisms around the world. There are already encouraging signs from third countries, like Canada, and Japan, who may follow our ambition to introduce a CBAM. There is also growing interest in the US for exploring the possibility of a carbon border levy. And China has just started its own emission trading scheme covering the power sector.

Candidate countries, potential candidates, as well as many of our partners in the neighbourhood are committed in implementing a large portion of the EU climate and energy acquis and in participating to the EU Emission Trading System or implementing mechanisms equivalent to the EU ETS. If this level of compliance with the EU rules is achieved, they will be exempted from CBAM.

Fit for 55, the maritime sector and airlines

Fit for 55 proposals also subject the international maritime sector to the EU’s carbon pricing system, ask greater efforts from airlines operating in Europe, and impose gradually more demanding sustainable fuel requirements on international aviation and shipping. These proposals stem from the realisation that while climate change is a global responsibility, we cannot afford to wait for an agreement at a multilateral level if we are to meet our goal of cutting transport emissions drastically by 2050.

“As the world’s largest provider of climate finance, the EU will of course continue to support low- and middle-income countries that are mostly in need in the transition to net zero emissions.“

We will continue our dialogue with our partners on the fit for 55 package, as well as engaging with them on their own ideas for climate action. As the world’s largest provider of climate finance, the EU will of course continue also to support low- and middle-income countries that are mostly in need in the transition to net zero emissions through technical assistance, technology transfer, extensive capacity building and financial support.

Together with our member states and our financial institutions, working as Team Europe, we have been so far the greatest donor to the $100 billion global Green Climate Fund(link is external) under construction. This effort will increase in the future with the new Global Europe NDICI fund which earmarks 30% of its resources for climate mitigation or adaptation purposes.

“With the new climate law and the Fit for 55 package, we show that, in the necessary global effort, the EU can be counted on to do its fair share.”

With data technology, climate change is the most decisive issue of our time. As I wrote earlier with Frans Timmermans: science tells us that we must embark on the green transition NOW, economics teaches us that we should, and technology shows us that we can. A just transition to a decarbonised world is also key to limit geopolitical tensions between countries: as asked by the European Council, climate diplomacy is and will remain at the heart of EU's foreign policy. With the new climate law and the Fit for 55 package, we show that, in the necessary global effort, the EU can be counted on to do its fair share.