The European Union's Copernicus Emergency Management Service (EMS) has been activated to assist authorities to respond to significant flooding across large areas of New South Wales. 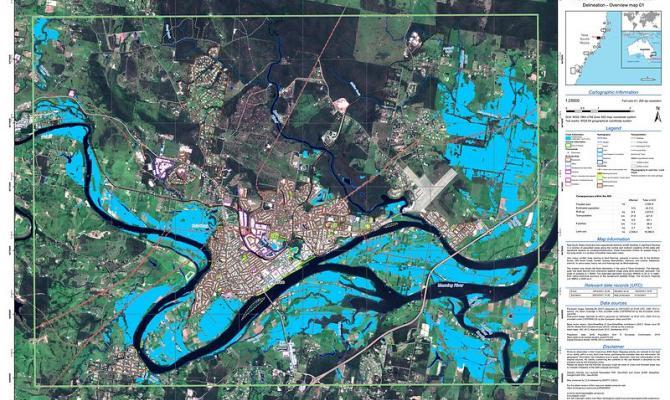 The activation was made on by Geoscience Australia on behalf of Emergency Management Australia, on 20 March following extreme rainfall across the Northern Rivers, Mid North Coast, Hunter, Sydney Metropolitan, Illawarra, and Central Tablelands districts. The map above shows flooding around Taree, where a house was swept away by the Manning River.

Days of torrential downpours across large areas of the state forced more than 18,000 people to leave their homes. Roads and bridges were cut off and more than 100 schools were closed, according to ABC media reports.

More than 30 emergency maps have been produced by the European Union satellites for areas including Taree, Kempsey, Maitland, Port Macquarie, Buladelah and Laurieton. The map below shows flooding around Port Macquarie on the NSW Mid-North Coast, one of the hardest hit areas. Image below: EU satellites captured the extent of the New South Wales floods (in dark blue) and areas of land scorched during the 2019-20 bushfires (in light brown). Copyright: European Space Agency. The sheer scale of the floods has been captured by the Sentinel-1 satellite in a series of ‘before and after’ images reported in the Sydney Morning Herald. Copernicus EMS plays a critical role in rapid disaster response worldwide. In February 2021, Emergency Services Australia requested activation of Copernicus EMS during the February bushfires on the outskirts of Perth, Western Australia. The activation was made on 5 February after extreme fire conditions resulted in significant fire activity and property/infrastructure loss north-east of Perth. The fire destroyed 86 homes. The activation on February was the 500th request for EMS assistance received since April 2012.