The crisis and Europe's responsibilities

Last Monday I opened the Summer University of the Universidad Internacional Menéndez Pelayo in Santander (Spain). We mostly discussed the consequences of the current crisis for Europe and the world. At this stage, the risk seems serious that it destabilises many developing countries and strengthens a trend towards authoritarian regimes. In this context, Europe has a key responsibility to defend effective multilateralism and help developing countries in need. 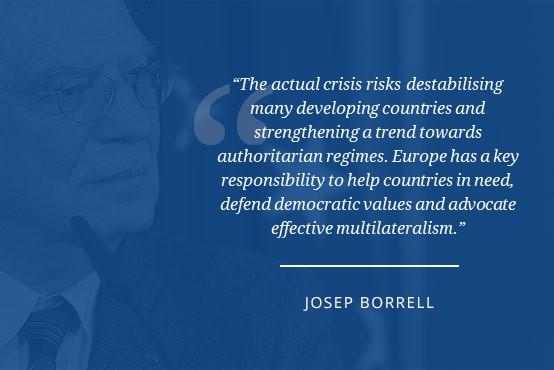 This week I have been in Santander, north of Spain, where I have been directing a course on the future of Europe - Quo Vadis Europa ? - since 21 years now. The coronavirus shouldn’t stop this much celebrated academic event from continuing, so it was organised this year as a VTC. The main issue was unavoidably how the pandemics has been a game changer on the process of European integration and its role in the world. I gave the introductory remarks and today we have had the last lecture with professor Enrico Letta, former Italian prime minister. Thanks to all that participated and the thousands that followed the course.

Whilst following closely the international events, and in particular the Belarusian crisis, and participating by VTC at the European Council about it, I have had the opportunity to express during this course my fears about the global consequences of the pandemic and the key responsibilities Europe have in that context. This are some of the ideas exposed during my introductory remarks. Many others have arisen during the discussions: they could for sure feed further reflections on this blog.

Europa has been severely affected but reacted swiftly

This crisis, which is far from over, is the most important since the Second World War. It is also the most global crisis we have experienced so far. The European Union has been severely affected by the epidemic with several member states, Italy and Spain in particular, among the worst-hit in the world. After a slow start, Europe has successfully taken strong measures to regain control of the situation even if the threat of a resumption of the pandemic persists.

Europe benefits from its social model, the most developed in the world, which has made it possible to guarantee a high and widespread level of medical care, while maintaining people’s income. Nevertheless, the crisis has affected the Member States of the Union in very different ways, which risked deepening already existing differences and the functioning of the single market. This is why it was essential to provide special support to the countries hit hardest. This is the main purpose of the EU recovery plan, which was approved by the European Council last July, a major step to improve the European architecture.

“If Europe completes the process of strengthening its solidarity and internal cohesion, it could reinforce its position in the world.”

I am confident that Europeans will come out of this crisis convinced that more Europe is needed. If Europe completes the process of strengthening its solidarity and internal cohesion, it could reinforce its position in the world. This was not the case in either previous financial crises. Although these crises started in America, they ultimately had more serious and lasting consequences in Europe because we struggled to react quickly and strongly enough. It seems that the reverse may be true this time, giving Europe a major global responsibility.

Away from Europe and the US, the crisis has indeed hit the developing countries very hard, whether in South Asia, Africa or Latin America, which is now the epicentre of the epidemic. This poses enormous risks for the future of the world in terms of inequality and social cohesion but also for peace and security.

“The crisis poses enormous risks for the future of the world in terms of inequality and social cohesion but also for peace and security.”

In many of these countries, the weakness of the health systems has combined with that of the social safety nets to make the fight against the epidemic extremely difficult. The importance of informal employment and the living conditions in slums have made it particularly hard to implement prolonged lockdown measures.

Developing countries have also been affected by the crisis through the fall in the price and volume of trade for raw materials linked to the slowdown in the world economy. Oil and gas producing developing and emerging countries in particular, like Iraq, Oman, Algeria or Nigeria, have seen their revenues plummet.

Remittances from migrants and tourism revenues are collapsing

Many developing countries rely also on remittances from migrants. According to the World Bank, it represented a flow of $ 554 billion in 2019 for low and middle income countries and represented more than 5 % of the GDP in 66 countries and even more than 10 % in 31 of them. This flow is expected to decline by at least 20%, or more than $100 billion, this year.

In addition to that, international tourism has also collapsed. According to the UN World Tourism Organisation, we have globally experienced a drop of 56% year-on-year in tourist arrivals between January and May. This translates into $ 320 billion lost in international tourism revenue, more than three times the loss during the 2009 economic crisis.

“It is important to keep in mind that a recession in a low income country – even a limited one - has more serious consequences than in high income countries.”

Last June, the International Monetary Fund predicted that GDP growth in the most developed countries would fall this year by 9.7 on average compared to 2019. It is more than in the emerging - 6.7 - and low-income countries - 6.2. Geographically, the expected drops vary significantly: - 9,5 points for Latin America vs - 6,5 for Sub Saharian Africa, - 6,3 for Asia and - 5,7 for the Middle East. In all this it is important to keep in mind that a recession in a low income country – even a limited one - has more serious consequences than in high income countries in Europe or elsewhere.

These difficulties are reflected in particular in the area of external financing. The cases of Lebanon or Argentina are the most obvious, but there are many more : developing countries do not generally have the same capacity as the United States, China or Europe to resort to massive monetary creation and budget deficits to support their economies in crisis without experiencing negative consequences.

“The ability of the richest countries to help developing countries to cope with this crisis, despite having their own difficulties, will be decisive in the coming weeks and months.”

We will likely face strong social and political tensions in several regions of the world as we have already seen vividly in Lebanon, Belarus or Mali. The ability of the richest countries to help developing countries to cope with this crisis, despite having their own difficulties, will be decisive in the coming weeks and months. We can expect this to be one of the main issues at stake in the China-US rivalry but it is also a central issue for Europe, particularly in relation to our neighbourhood, in Africa and the Middle East.

The question of debt restructuring

Helping developing countries cope with the crisis is not only a question of solidarity, but also a matter of a well-understood interest: even if Europeans manage to cope with the crisis at home, if surrounding countries are destabilised, Europe will also be affected. In addition to outright financial support, the international debate on helping developing countries will also revolve around the process of restructuring and cancelling the debts of countries in difficulty. Those who will be the most proactive in this area during the next months, will have scored points for the post-crisis period.

“It is up to Europe to mobilise democracies to defend and promote fundamental human rights and democratic values in the international arena.”

At a time when the United States is tending to turn in on itself and authoritarian powers are gaining strength, it is also up to Europe to mobilise democracies to defend and promote fundamental human rights and democratic values in the international arena. Whether in Hong Kong, Sudan or Belarus, the events of the last few months have confirmed, if proof were needed, that the desire for political rights and freedoms remain universal. The peoples of all continents who are deprived of it continue to aspire to it as soon as they succeed in lifting the leaden cloak of repression.

The urgent need for a renewed multilateralism

This remobilization of democracies must serve to defend and promote a renewed multilateralism, adapted to the world of the 21st century and its challenges. The Covid-19 pandemic has shown how much we need multilateral cooperation: as long as we do not have a vaccine, we will only be able to control this disease if it is controlled everywhere.

This is true for the coronavirus pandemic but also for many other global challenges. Indeed the current health and economic crisis must not make us forget the seriousness of the threat posed by the ecological crisis. We can only hope to overcome this crisis through strong and closely coordinated global action, in particular to implement swiftly the Paris agreement and combate jointly biodiversity loss.