Defending Ukraine in its hour of maximum need

HR/VP Blog - Ukraine is fighting off the Russian invasion. As EU, we are mobilising all tools to preserve a free, democratic and sovereign Ukraine. We have adopted unprecedented sanctions; we are blocking the Kremlin-linked disinformation machine and, for the first time ever, we will supply Ukraine with lethal weapons. We have probably advanced more in building a geopolitical Europe in one week than we did in several years 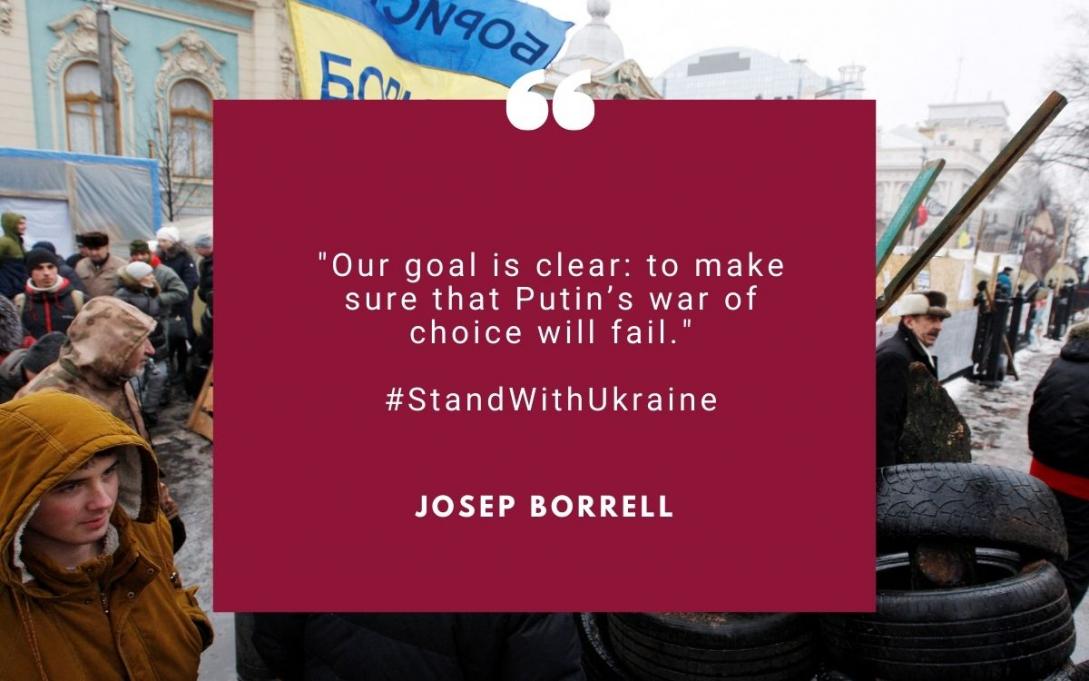 A major war has broken out in Europe and it is President Putin’s war of choice. Across Ukraine, we see the violence and destruction caused by the Russian military, including missile attacks on civilian targets. There are already hundreds of deaths and the UN estimates that more than 600,000 people have fled the violence – with many more to come.

We tried for months to avoid this war and pursue the path of diplomacy. But Putin lied to the faces of all who met him, pretending to be interested in a peaceful solution. Instead, he opted for a full-scale invasion, a fully-fledged war.

He underestimated Ukraine. Having dismissed Ukraine’s identity as fake and its government as illegitimate, he did not expect Ukrainians to fight heroically for their country, nor the inspirational leadership of their President Zelensky. He counted on the EU to dither and the West to be divided: to maybe make some statements but not much more. Instead, we have shown unity and taken concrete steps with real bite. Putin also relied on getting international support from fellow strong men and hoped that many others would just look away.

Instead, he has led his country into growing isolation. Not only do most countries condemn the Russian invasion, but the Champions League final has been moved from Saint Petersburg to Paris; the Russian Formula 1 Grand Prix has been cancelled; FIFA and UEFA have suspended Russia from global football; Putin is no longer the honorary President of the international judo federation, and Russia has been kicked out of the Eurovision Song Contest

Five days into the war, Ukraine has so far managed to slow down the Russian onslaught. It has done so despite the overwhelming number of Russian forces and the outrageous escalating tactics that Putin has chosen, including attacks on residential areas in cities like Kharkiv.

At the same time, we see thousands of brave Russians being detained for participating in calm protests for peace and against the unjustified attack on Ukraine. Numerous artists, sports men and women and business leaders are speaking out against the war. We know that the Kremlin is not Russia and that Putin’s choices are not those of the Russian people.

Our goal is clear: we want to make sure that Putin’s war will fail. To that end, we have been working non-stop on various action tracks:

From the start of the war, we have worked to bring together a large international coalition to support Ukraine and condemn Russia’s actions. It is striking that many governments and regional organisations from around the world have expressed their condemnation of Russia’s aggression, ranging from the African Union to leaders across Latin America and Asia. They, like us, reject a world where big countries attack smaller neighbours and where ‘might makes right’.

At the UN Security Council, 11 out of 15 countries voted in favour of a clear condemnation of its aggression with only three countries abstaining (China, India and the UAE) and forcing Russia to cast its veto on its own. Next up will be the vote in the UN General Assembly where we expect an overwhelming majority to say loudly and clearly that Russia is violating Ukrainian sovereignty and the principles enshrined in the UN Charter.

At the Human Rights Council in Geneva, the EU and its partners have expressed our unified horror at Russia’s blatant human rights violations.

We have adopted tough sanctions, targeting the financial, energy and transport sectors and restrictions on dual use goods. The list of Russian individuals sanctioned now include President Putin and Minister Lavrov as well as top oligarchs, political and military figures, and propagandists that have responsibilities for the aggression. A total of 680 individuals, high-profile persons, members of the State Duma, members of the Russian Security Council, as well as 53 entities are on the sanction list.  We are also expanding our sanctions regimes to include targeting corruption and foreign information manipulation and interference.

In addition, we have cut off the most significant Russian banks from the SWIFT system and frozen all transactions with the Russian Central Bank. This has triggered a fall of the rouble by around 30% and forced a closure of the Russian stock exchange plus a doubling of interest rates by the Central Bank to stave off a total collapse of the Russian economy.

On all our sanctions, including the most severe ones such as the ones on SWIFT and the Russian Central Bank we are coordinating closely with the US, UK, Canada and others. In addition, Switzerland has announced that it will adopt the same sanctions as the EU, including notably those in the financial area.

All EU member states have closed their airspace to all Russian aircraft, including those of oligarchs, and so has Canada, making it impossible to leave Russia by plane for the West or North: 65% of all flights from Moscow airports have been cancelled.

As this is a full-scale war and Ukraine has every right to defend itself, we need to support it with the means it needs for that self-defence. We have decided to use the European Peace Facility to provide lethal arms equipment for a value of €450 million and €50 million of non-lethal supplies (such as fuel and protective equipment). These measures will be fully coherent with what EU member states have already decided to do on a national basis. This is the first time ever that the EU will provide lethal military equipment to a country under attack. I have discussed with EU Defence Ministers how to implement these measures as quickly as possible, using the EU Military Staff as clearinghouse.

We know the cyber front is crucial so we activated the PESCO project Cyber Rapid Response Teams and the European Commission is providing equipment, software and other forms of assistance to boost Ukrainian cyber resilience.

There are many other planks in the EU’s overall response. We are increasing pressure on Belarus for its complicity in Russia’s attack. We are also expanding our support to Moldova, which is bearing the consequences of the war and where I will travel on Wednesday to signal the EU’s commitment.

Russia’s outrageous attack on Ukraine was a shock, sending waves across the continent and further afield. It risks creating a world where the rules-based international order gives way to the laws of the jungle.

We do not know when or how the conflict will end. But this week we might have seen the belated birth of a geopolitical Europe. The one that we have talking about for years: with a unity of purpose and using all instruments and leverage in support of its political goals.

In the last days, we have acted at the speed of light and broken several taboos. We have arguably advanced more in one week than we have over decades of debates. All this proves that when crisis hits, Europeans do come together and summon the collective will to defend their values and interests from attack. To stand with Ukraine, not just with words, but with deeds. To pay a steep price if needed.

We want Russia to come back to reason so that peace can be re-established in Ukraine and the European continent. To get there, a long and difficult path lies ahead. Surely, this week has been a sea change in the history of Europe.