Trade policy: a lever of the EU as a geopolitical global player

HR/VP Blog – Recently, Executive Vice-President Valdis Dombrovskis presented a new trade strategy at the College of the European Commission. EU trade policy can be an important foreign policy instrument: we should leverage our trading power to promote EU interests and values and build a fairer and more sustainable form of globalisation. 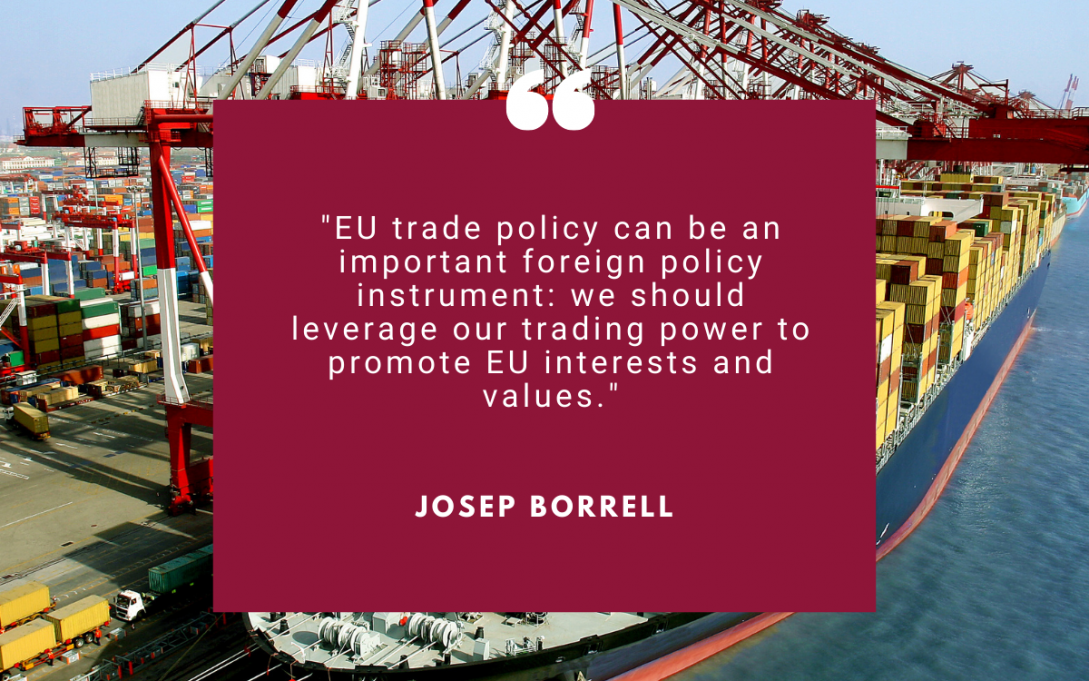 On 17 February, the European Commission approved a new EU trade strategy, prepared by my colleague Executive Vice-President Dombrovskis in charge of trade, in cooperation with the European External Action Service. It is based on the concept of “Open Strategic Autonomy”, which holds that we must make best use of the EU’s traditional openness and international engagement but also stand ready to enforce EU rights and protect our workers, businesses and citizens when others do not play by the rules.

"In the field of trade, the EU can take quick decisions and it has a lot of clout. The question is: what do want to use it for?"

EU trade policy is one of our most important tools to support European strategic interests and values around the world. Why? Because size matters. The Union is still one of the largest trade and investments players in the world. It is the world’s largest trader of agricultural and manufactured goods and services and ranks first in both inbound and outbound Foreign Direct Investment. The EU has the largest network of trade agreements in the world. On trade issues, the EU speaks with one voice because trade policy is an exclusive competence of the European Commission. Decisions require a qualified majority of member states instead of unanimity, as is the case in foreign and security policy. So in the field of trade, the EU can take quick decisions and it has a lot of clout. The question is: what do want to use it for?

Since the EU’s previous trade strategy of 2015, the world has changed a lot. The rise of global value chains has left individuals and communities behind and increased inequality within countries. It has led to growing criticism of globalisation. We have seen also the erosion of the multilateral system because of great powers rivalry and competitive nationalism with an aggravated crisis at the World Trade Organisation (WTO) and an open US-China ‘trade war’. In this new multipolar global order, trade has been more and more weaponised as a tool for power projection and to generate networks of dependencies.

During the last decade, China’s growth has certainly been impressive, but its economy has not become a real market economy as the result of its WTO membership. China has not opened its internal market in a way that is commensurate with its weight in the global economy. It has also not fulfilled all the commitments it made when it entered the WTO, for instance on government procurement. Moreover, current WTO rules are inadequate to deal with key issues regarding China, such as state capitalism, property rights and its enduring classification as a ‘developing country’ which sits badly with its high tech development.

But the WTO’s problems go beyond China. In fact, the WTO is going through a deeper crisis. Its core functions - negotiating trade liberalisation deals, monitoring members’ trade policies and the binding settlement of trade disputes - are currently stalled or ineffective. The organisation needs structural reform and find ways to support the global economic recovery from the pandemic, addressing at the same time the challenges of sustainability and digitalisation.

"As EU, we believe the world economy needs a stable and predictable, rules-based multilateral trade system"

As EU, we believe the world economy needs a stable and predictable, rules-based multilateral trade system. Therefore, we need a new consensus to update the WTO rulebook. It will be a hard task, given the diverging views among the key players. However the significant change in attitude of the new US administration and the recent designation of Ngozi Okonjo-Iweala as new WTO Director General give some hope.

In any case, the EU has been and will remain a champion of openness and global cooperation. It will continue to forge solutions based on a modernised, rules-based global trade framework. We will engage with like-minded countries to pursue a strong environmental agenda in the WTO and work to ensure that trade policy and practice supports decent work and social fairness around the world. We will also continue pushing for the creation of an International Procurement Instrument to level the playing field in public procurement markets.

"The EU must equip itself at the same time with the necessary trade tools to operate in a fiercely competitive international environment, and defend itself robustly from unfair trade practices"

However, the EU must equip itself at the same time with the necessary trade tools to operate in a fiercely competitive international environment, and defend itself robustly from unfair trade practices. To reinforce our defensive arsenal, the Commission will propose new legal instruments to better follow and address distortions caused by foreign subsidies on the EU’s internal market and to protect us from potential coercive actions of third countries. We are also working on an EU strategy for export credits and new, due diligence legislation for corporations to support human and labour rights worldwide and fight against forced labour.

When it comes to trade agreements, nice promises on paper are not enough. Commitments need to be implemented. We certainly need a stronger focus on the enforcement of existing bilateral trade agreements, so that European businesses, farmers and workers can benefit, as much as possible, from the rights that have been negotiated and agreed trough the 46 bilateral deals which the EU has signed with 78 partners all over the world.

Regarding our bilateral trade agenda, EU-US trade relations will continue to play a central role. We want to revive the core transatlantic relationship and have proposed to the new Biden administration a new ”Transatlantic agenda for global change”. The participation of Secretary of State Antony Blinken in the February Foreign Affairs Council already demonstrated a shared commitment to develop a common agenda on all strategic issues, including trade and technology. The agreement between the EU and the US to suspend all punitive tariffs on exports imposed in the Airbus and Boeing disputes last week is an important step forward in that direction.

We want to quickly resolve our trade disputes with the US, to pave the way for strategic cooperation on WTO reform. We also intend to work with the US and other partners to establish the right rules for digital trade, avoiding digital protectionism. We need to set the standards for newly emerging technologies and make sure these standards reflect our values, and in particular the EU’s high privacy standards under the General Data Protection Regulation. To this end, we have proposed to create an EU-US Trade and Technology Council We also hope also to work closely with the US and other like-minded partners on human rights, child labour and forced labour.

"Building a more balanced, rules-based economic relationship with China is a priority"

EU-China trade and investment relationships are both important and challenging. Building a more balanced, rules-based economic relationship with China is a priority and the recent political conclusion of the negotiations on a Comprehensive Agreement on Investment (CAI) can be a step in this direction, provided we ensure the commitments China has made are fully implemented.

The CAI is a rebalancing and catching-up agreement. As the Chinese market is more closed than the European one, it was important for Europe to obtain greater market access. This is what we achieved in the manufacturing sector, the automotive sector, financial services, health, telecommunications and maritime transport. The EU is getting through the deal what the US was able to achieve under the US-China phase one agreement of early 2020. In other areas, such as subsidies, we got more than the United States. As these benefits are mostly on a Most Favoured Nation-basis they will also become available to all of China’s trading partners.

The CAI also raises the bar of China’s international commitments in the areas of sustainable development and level playing field. It includes obligations related to state owned enterprises, forced technology transfers and enhanced transparency rule for subsidies. It will allow the EU to gather more information on the behaviour of state-owned enterprises and levels of subsidies in China. It can help to update the WTO rulebook and could contribute to the revitalization of global economic cooperation. We need to work with China while keeping our eyes wide open.

Beyond the US and China, the overall focus of the new EU trade strategy is on the EU neighbourhood, including enlargement countries, and Africa. Our will to strengthen our “strategic autonomy” and reduce our economic dependency on distant countries also means   developing our trade and investment ties with them, and better integrating our partners in these regions into EU’s supply chains.  It is part, for example, of the new southern partnership we are proposing to our neighbours in the Mediterranean region.

With Asia and the Pacific, which is where a lot of the world’s economic growth will come from, we will seek to consolidate our partnerships and enhance trade and investment reaffirming our commitment to conclude a series of FTAs with partners in the region. Our new strategic partnership with the ASEAN should help us to engage more actively in that direction.

Regarding Latin America, we intend to create the right conditions to conclude negotiations with Chile and ratify our pending agreements with Mexico and Mercosur. With both regions, we want to strengthen regulatory partnerships focusing on climate and digital.

All in all, when it comes to trade the EU is fully committed to leveraging its global power to promote EU interests and values and build a fairer and more sustainable form of globalisation.