The EEAS at 10 – For Europe, worldwide

HR/VP Blog – Tuesday 1 December was a special day. It marked my first year in office as HR/VP and also the 10th anniversary of the EEAS. This was a good opportunity to take a step back and reflect on what has been achieved and where we go from here. 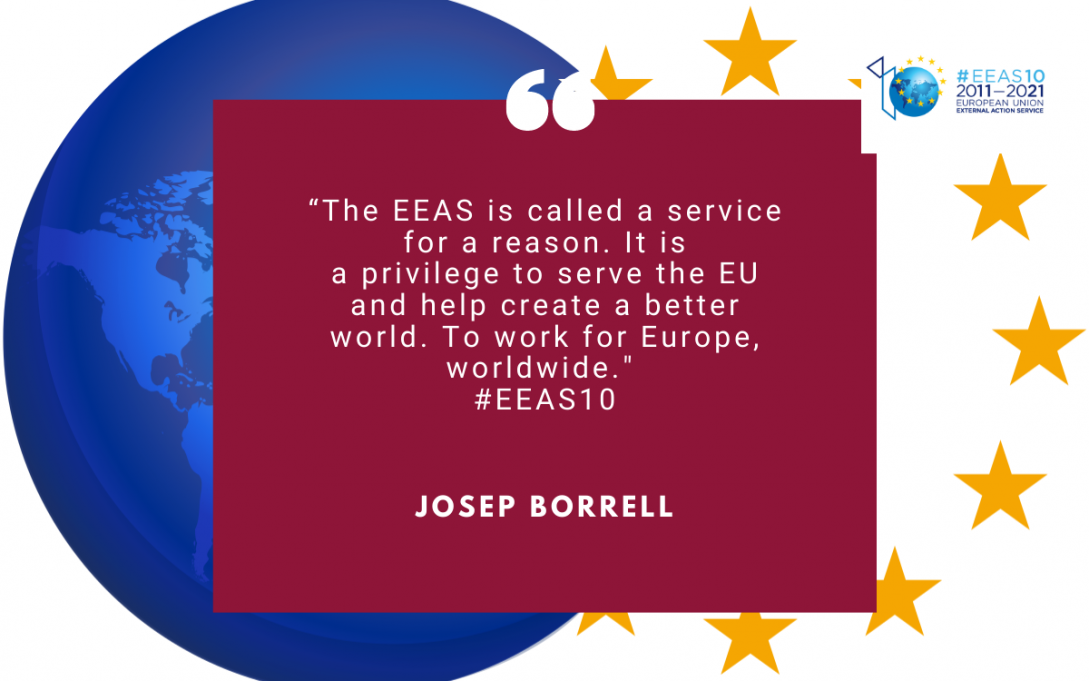 That was precisely the idea behind the debate “The EU in a changing world – Staying on course in troubled waters” that we organised bringing together, for the first time, three High Representatives (of course we had invited Cathy Ashton as well, but regrettably she was not available). For me it was a true pleasure to discuss the progress made in the past years and what role the EEAS played in this respect with Federica Mogherini and Javier Solana, who are both not only my predecessors  but also good friends.

It was also moving to hear non-EU voices such as Antonio Guterres, Madeleine Albright and Juan Manuel Santos. They presented how they have worked with the EEAS and their appreciation for it being a reliable and trusted partner in ending conflicts and solving common problems together. From time to time, one needs to hear from outsiders how they see us and what we have done for them. And also how we can improve things. It’s called perspective; it can help to correct mistakes but also act as encouragement.

In a conversation moderated by Christine Ockrent, we reviewed the past tumultuous years. Asked what our choice for the most memorable moment or decision was, Javier Solana said for him it was the development of crisis management capabilities to enable the EU to be an security actor on the ground. Federica Mogherini highlighted the conclusion of the Iran nuclear deal and the launch of Permanent Structured Cooperation (PESCO), which gave a major boost to European defence integration. I mentioned my second day in office when I attended the ceremony in Paris to pay respect to the French soldiers who lost their lives in Mali fighting terrorism. Their engagement serves as a reminder of the need for Europeans to be engaged to work for security and peace, sometimes far away from Europe.

Further elaborating on the changes of the past years, Javier Solana reminded us that we constantly need to learn lessons. And in the EU we have learned many. For instance, our response to the economic consequences of the pandemic has been far more rapid and effective than the one we gave to the financial crisis. Federica Mogherini stressed the growing complexity of today’s problems, which call for integrated approaches and the need for scale, which only the EU can provide. For my part, I highlighted the importance that narratives play in today’s world and for the EU to be proactive in this field, setting out what we do and why. If we don’t, others will.

Mixing personal memories and analytical reflections, we covered the progress in turning the EU into a credible security actor and the EU’s role in ‘making multilateralism great again

Mixing personal memories and analytical reflections, we covered the progress in turning the EU into a credible security actor and the EU’s role in ‘making multilateralism great again’. Naturally, given the central role of the EEAS in delivering the Iran nuclear deal, we spent quite some time discussing what the key ingredients were for this diplomatic success; how Europeans managed to keep the deal alive after the withdrawal by the current US administration and what we should do now, with a new US President coming into office, to ensure full compliance by all parties.

All in all, it was a memorable event with great questions from the online audience and a lot of engagement on social media. It reinforced my belief that the EEAS plays a unique role in being the interface between Europe and the wider world. It is full of committed and professional staff. And I'm very proud of their work, as also President von Der Leyen expressed. In the end, any organisation is only as strong as the women and men working for it.

Above all, the EEAS is called a service for a reason. It is a privilege to serve the EU and its citizens and to help create a better world. To work for Europe, worldwide.

You can see some of the highlights of the debate here and watch a recording of the full debate here.