Across the globe 1 in 3 women, have suffered violence during their lifetime. Violence against women and girls comes in many forms: from domestic violence; cyber-violence; sexual violence; psychological violence; economic violence; femicide; to conflict-related sexual violence. This is a reality even in Europe. The situation is alarming and deplorable. 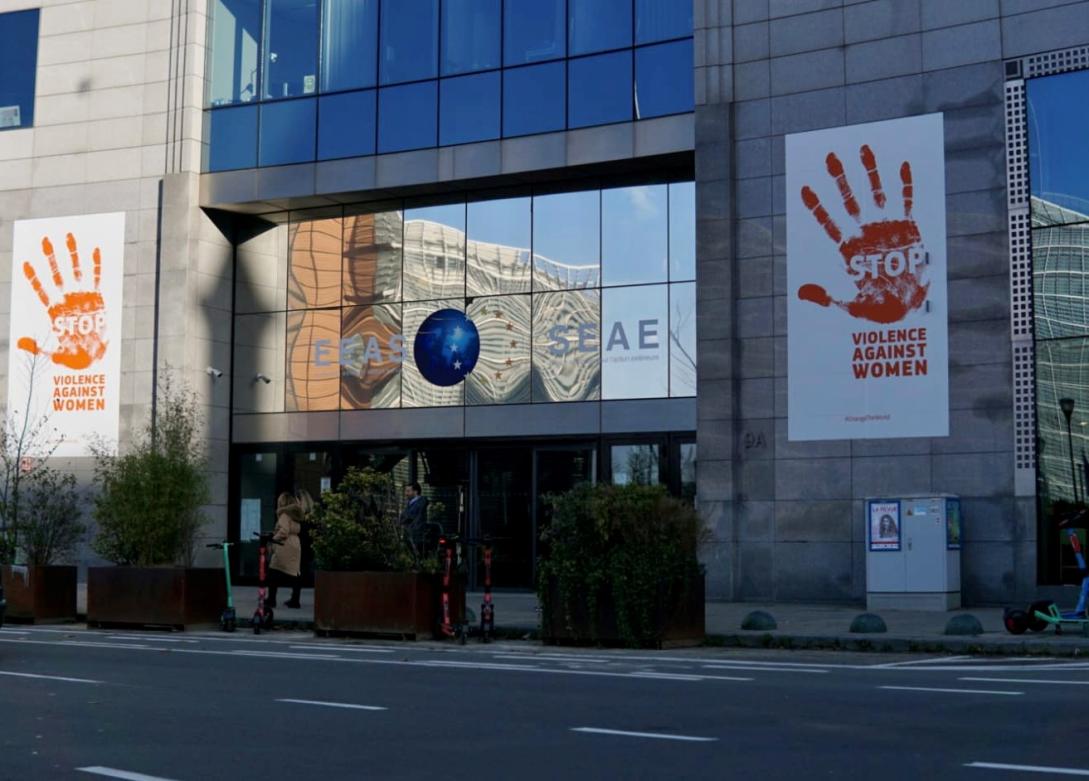 “It is unacceptable in the 21st century that women and girls continue to be abused, harassed, raped, mutilated or forced into marriage."

- Joint statement by the European Commission and HR/VP Josep Borrell

25 November marks the International Day for the elimination of Violence against Women, when we show our solidarity towards victims and survivors, and we kick off the 16 days of activism to end gender-based violence. It is also the 2nd anniversary of the EU’s Gender Action Plan III.

“Every 11 minutes, a woman or girl is killed in her home”

The EU condemns all types of violence against women. But this year the EU pays special attention to violence against women in conflict areas and humanitarian crisis settings. In Ukraine, but also in Myanmar, Afghanistan, Ethiopia, the DRC, the Central African Republic, South Sudan and Yemen, and other states faced with war and conflict, many women and girls face persistent threat and sexual and gender-based violence.  The EU is committed to preventing – and ensuring accountability for – these heinous offences that should have no place anywhere in the world.

In March 2022, the Commission proposed a new directive to combat violence against women and domestic violence. For the first time, it will set out binding EU rules to tackle violence, including online violence comprehensively.

Globally, 38% of women experienced online abuse, and young women aged 18 to 24 are particularly at risk. Online violence is also one of the leading causes of the gender digital divide globally, preventing women to advance in Science, Technology, Engineering, and Mathematics (STEM) fields.

The EU continues to support civil society initiatives to prevent and combat gender-based violence under the Daphne strand of the Citizens, Equality, Rights and Values (CERV), and next year it will establish a network on the prevention of gender-based violence and domestic violence to bring together EU Member States  and stakeholders, and create a community of practice.

The EU’s external commitments are reflected in the Gender Action Plan III (GAP III) which calls for bold actions to tackle the structural causes of gender inequality. Through cooperation and support, in international fora and in political dialogues with countries around the world. By 2022, 70% of the EU’s new actions contributed to achieving gender equality, with the goal of reaching 85% by the end of 2025. The EU wants to be a leading force on all the priorities of GAP III, including on Women, Peace and Security.

For example, after the Taliban take-over in Afghanistan in August 2021, the EU supported the set-up of a Forum for Afghan Women Leaders, to provide them a platform to participate in the political process and policy-making.

Gender inequality is aggravated in times of conflict and crisis, and women’s relentless work towards peace, security and democracy is consistently countered by threats and violence across the globe. For instance recently in Iran, where peaceful protests largely led by young women have been curtailed with excessive and lethal force.

Women from the LGBTIQ+ community also face combined forms of violence, stigma and discrimination: they are targeted as women, but also on the basis of their sexual orientation, gender identity, expression or sex characteristics. Lesbian women, for example, are targeted for so-called ‘corrective rapes.’

"Worldwide, 22% of countries still criminalise consensual same-sex relations between women, and only 1 in 10 countries protect trans people from discrimination."

The EU stands in solidarity with victims and survivors of violence. In addition, the EU-UN Spotlight initiative has demonstrated that change is possible, by improving the lives of millions of women and girls around the world, namely through better-informed national laws, policies and institutions, stronger local support services, and community-based prevention.

The EU calls for bold and united action at all levels to eradicate violence against women from our societies. Let us all join this global call, today and every day, and  contribute to a world where every woman and girl has equal opportunities, rights and responsibilities.

Let’s #OrangeTheWorld together and deliver a strong message to STOP  violence against women!

We need to act now for a gender-equal world.