HR/VP Blog - The humanitarian situation in the Ethiopian Tigray region remains very serious. This conflict threatens also to destabilise the whole Horn of Africa. I have asked Pekka Haavisto, Finnish Minister of Foreign Affairs, to travel to Ethiopia to repeat our requests to the government and assess the situation. For the EU, helping to stop the human right abuses in the Tigray region and restore peace in Ethiopia is a high priority. 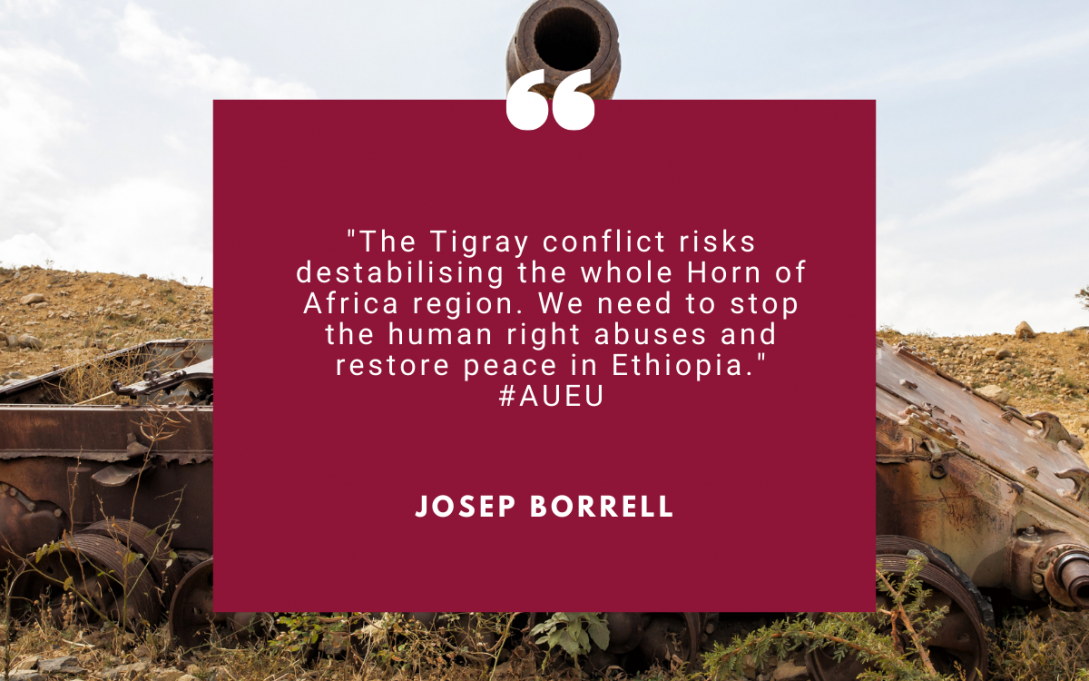 Five months into the conflict, the situation in the Ethiopian Tigray region remains alarming. Active hostilities are ongoing in some parts of the federated state and humanitarian aid remains very limited because of fighting, highly fluid security situation and the low capacity of humanitarian actors to address the security risk effectively.

The situation continues to deteriorate further, with millions of people not receiving assistance. Reports are abundant of destructions, massive looting, extra-judicial killings, systematic rapes and gender-based violence, forceful returns of refugees and allegations of ethnic cleansing and war crimes.

Ethnic tensions in other Ethiopian regions

Ethnic tensions are reported also in other Ethiopian regions, including in Benishangul-Gumuz and mostly in Oromo and Amhara Regions. Not to mention the COVID-19 pandemic which is accelerating: last week, Ethiopia has recorded the highest number of cases in the African continent, with 12.000 reported new cases.

This crisis risks destabilising an already fragile region. In the last months, we have witnessed the arrival of around 68,000 Ethiopian refugees to Eastern Sudan, an escalation of tensions along Ethiopia/Sudan border and a near stalemate in the difficult negotiations between Ethiopia, Sudan and Egypt on the filling of the Grand Ethiopian Renaissance Dam (GERD).

After many weeks of denial, some positive steps have been announced by the Ethiopian government. However, to be credible, they need to materialize very quickly. In this context, I have asked my colleague Pekka Haavisto, Finnish Minister of Foreign Affairs, to go back to the region this weekend as my representative. He will travel to Ethiopia, visit Tigray and report to the Foreign Affairs Council on 19 April where, together with the 27 Ministers from the European Union, we will discuss the steps forward.

Minister Haavisto is tasked to repeat our requests and assess the progress made so far on various fronts.

Firstly, hostilities must cease. As long as they continue, humanitarian aid cannot be delivered as it should and the insecurity that prevails in many parts could jeopardize in the whole country the elections foreseen for 5 June.

“Firstly, hostilities must cease. Secondly, humanitarian access must be granted to all people in need in all areas. Thirdly, investigations on human rights abuses must be carried out. Fourthly, and particularly important, Eritrean troops must withdraw.”

Secondly, humanitarian access must be granted to all people in need in all areas. Despite improved access, the needs remain enormous and largely unaddressed and the situation is worsening. This is also the case even in areas that receive assistance. The number of Internal Displaced Persons (IDPs), acknowledged by the Tigray Interim Regional Government, has increased from 700,000 to 900,000 in the past two weeks.

Thirdly, investigations on International Humanitarian Law (IHL) and human rights abuses must be organized. The Office of the United Nations High Commissioner for Human Rights (OHCHR) and the Ethiopian Human Rights Commission (EHRC) have agreed to conduct a joint investigation into violations and abuses committed by all parties. Discussions on the exact modalities have started and should be accelerated so that investigations may start quickly. This is part of the much-needed accountability process for the victims.

Fourthly, and particularly important, Eritrean troops must withdraw. There have been recent announcements on that front, however, we do not have confirmation at this stage that this withdrawal is happening on the ground. Here again we need to see this materialize quickly.

Not enough visibility on the world stage

The crisis in Tigray has not received the appropriate visibility on the world stage until now. However, US Secretary of State Blinken has recently denounced “ethnic cleansing” in the region, top UN senior officials have called for a stop to indiscriminate and targeted attacks against civilians and it remains a high priority for the European Union. With my G7 colleagues we confirmed yesterday our will to move forward together on all the above-mentioned points.

“No one has an interest to see further destabilization and fragmentation – neither at country level nor at regional level.”

Precisely because Ethiopia is an important partner for the EU, we want to continue discussing and keep a door open. No one has an interest to see further destabilization and fragmentation – neither at country level nor at regional level. Together with the US administration, we will increase our efforts in the coming weeks to make progress.

Time is of the essence

“The longer a conflict lasts, the longer it takes for reconstruction, reconciliation and healing.”

As Prime minister Abiy Ahmed Ali said by receiving the peace Nobel Prize 2 years ago for having restored peace between Ethiopia and Eritrea after 20 years of war: “nurturing peace is like planting and growing trees. Just like trees need water and good soil to grow, peace requires unwavering commitment, infinite patience, and goodwill to cultivate and harvest its dividends.” This is exactly what Ethiopia urgently needs again today.