On 18 November, the High Representative for Foreign Affairs and Security Policy of the European Union and Vice-President of the European Commission, Josep Borrell participated at a commemorative event to remember those who gave their lives in the service of peace. This event was organised as part of the 20th anniversary of the EU Military Staff. 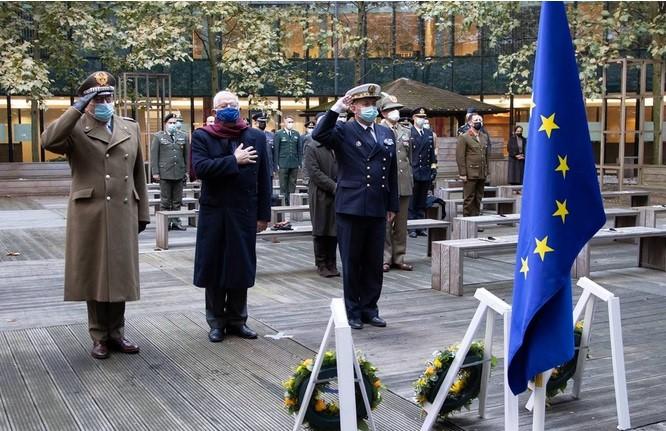 During the event, in their respective addresses, High Representative Mr Borrell, Chairman of the European Union Military Committee, Gen Graziano and Director General EU Military Staff, Vice Admiral Bléjean all paid tribute to all military personnel who gave their lives in the pursuit of Global peace and European security. In addition to this, they acknowledged the work done by former Directors General, some of whom were in attendance and emphasised the importance of having a European Union that could protect its citizens and its values.

All personnel attending the Ceremony observed a minute's silence in memory of all who died in the service of peace. This was followed by the sounding of the Last Post and a piper's lament. The HRVP, C EUMC and DG EUMS laid a wreath at the base of the EU Flag which was at half-mast, on behalf of the Member States, Member states' Chief of Defence and the European Union Military staff.

The ceremony concluded with the raising of the EU Flag to full mast, the sounding of Reveille and the playing of the EU Anthem, but the Band of the Belgian Royal Air Force.