HR/VP Blog - Last Monday, we had the EU-Israel Association Council meeting - for the first time in ten years. It was important to relaunch this top-level channel for dialogue between the EU and Israel. We are close in many ways and cooperate in many fields. At the same time, this meeting was also an opportunity to talk about issues on which we don’t agree such as the peace process and the situation in the Palestinian territories. Doing both is the point of diplomacy and a good partnership. 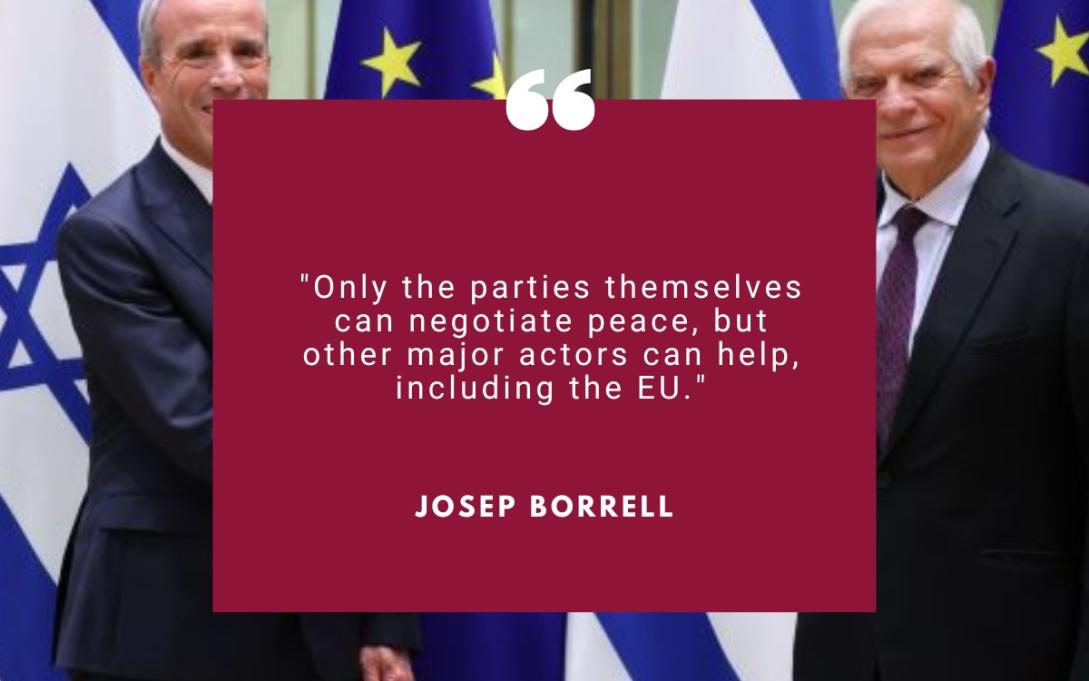 After so many years, there was a lot to talk about many issues on our common agenda. Unfortunately, Prime Minister Lapid, who currently is also Foreign Minister, was unable to join the Council in person, but we exchanged with him via VTC beforehand and with the Israeli delegation led by Elazar Stern, the Minister for Intelligence who had come to Brussels for our meeting.

In many ways, the EU and Israel are very close. The EU is Israel’s biggest trade partner. We cooperate with Israel in a wide range of areas, indeed more so than with any other country in the region. Israel has an impressive track record as part of our Horizon research programme. Israel is for instance a pioneer in water technology and in agriculture in warm climates, something that is very interesting for us. On the energy field we recently signed a trilateral agreement with Egypt which will allow for Israeli gas to reach the EU.

Moreover, people-to-people contacts between the EU and Israel are intensive. Many Israelis live in Europe and many European citizens live in Israel. The EU has adopted a broad strategy to fight antisemitism, which is a key priority for the EU and Israel. We also discussed and share deep concerns about terrorism as well as about regional stability across the Middle East. The bilateral EU-Israel relationship overall is a solid and very constructive one. And we are ready to restart the full range of meetings with Israel, including on political issues and human rights.

Naturally, the Association Council meeting was also an opportunity to talk about issues on which we do not agree. In a joint position paper prior to the meeting, all 27 EU member states set out their priorities for the relationship as well as the issues on which we have differences with Israel. The biggest one on that list is the persistent lack of progress towards a settlement of the Israeli-Palestinian conflict.

During the last 30 years, thousands of people have died unnecessarily due to this conflict. Millions of Palestinians continue to live under occupation, on less and less land and with the two-state solution becoming less and less viable. Millions more are still refugees. Meanwhile, millions of Israelis live in fear of a conflict-inspired terror attack, which have killed numerous victims in the past decades.

There are many reasons why this conflict continues, including terrorism and regional instability. We must have an honest analysis of the root causes and we call on everyone to do their part to address these. Certainly, the continuing conflict is harmful to all. It means prolonging the suffering and the insecurity for people on both sides. And that in turn threatens the long-term stability of Israel, and for many its international standing. As friends and partners of Israel, we need to address this and for me that was a key reason to organise this official meeting after so many years.

The EU used the Association Council to express its views and hear those of Israel on a number of difficult issues such as the closure of Gaza and the suffering of its estimated 2.3 million inhabitants; the continued construction of new settlements in the West Bank and East Jerusalem; continued settler violence without accountability; the evictions of numerous Palestinians “from an Israeli firing zone”; the number of casualties, especially children; the demolitions of EU-funded humanitarian structures; administrative detentions; the erosion of the status quo on the Holy Sites and the designation of respected NGOs as terrorist organisations. These are all things happening today without any improvement. As I said in New York during the UNGA week, these things are difficult to understand, for us and other close friends of Israel. And we need to discuss these issues openly – and that is what we try to do on this occasion.

While we discuss the crises of today, we must also address the fundamental issues of tomorrow. We want to hear from Israel what peace it needs and wants, how we can contribute to its security, and what it is willing to do to address the legitimate demands of Palestinians to have their own state. We need of course also to ask the Palestinian authorities how they want to achieve peace, and assure Israel of its security. To that end, we will reach out to them to have an exchange at the highest possible level. The Palestinian side also has homework to do, on reforms, on governance and on the delivery of basic services to its population. We will offer our support, but we also have expectations and questions for the Palestinians.

As EU, we need to develop a practical perspective on how to help building a future peace. This is why, two weeks ago at the United Nations high-level week in New York, I hosted a meeting with Arab leaders, at the initiative of Saudi Arabia and the Arab League, to revive and build on the 2002 Arab Peace Initiative. Inspired by the recent normalisation agreements with four Arab States, is it possible to make progress towards a comprehensive regional peace that ends the Israeli Palestinian conflict and brings substantial security, trade, and other cooperation for the region at the same time? There is for sure a long and difficult road to walk, but we must explore all we can to bring peace and prosperity not just to Israel and Palestine, but to the entire region.

To this end, I have asked EU Special Representative Koopmans to explore with all parties and international partners the opportunities for security, trade, water, energy, innovation and other areas of cooperation that peace would bring, and to work within the EU to identify our own potential contributions to these efforts.

I felt in New York that there is a growing interest to pursue these thoughts. We would like to engage with all parties to have a fresh look at regional peace and make our contribution to that peaceful future. The Association Council meeting with Israel was a first step along that path.