Digital cooperation was high on the EU's agenda at this year's United Nations General Assembly in New York. For EU High Representative Federica Mogherini, the focus was on Lethal Autonomous Weapons Systems (LAWS), as well as promoting multilateral cooperation in this field and using digital technologies for mediation. 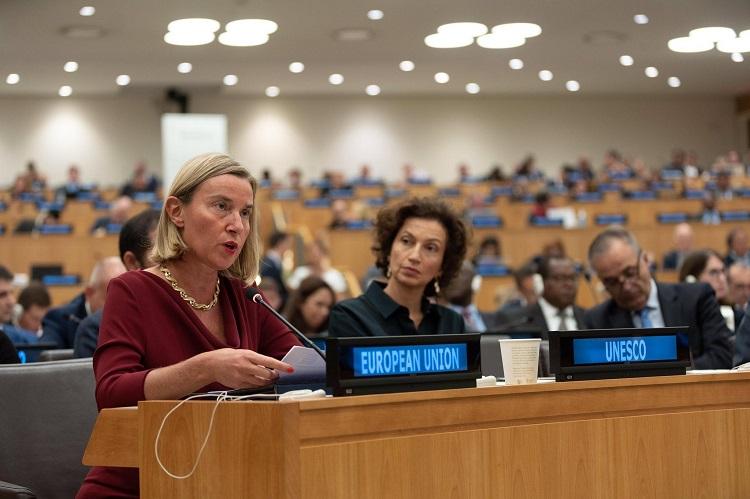 For the second year running, EU High Representative Federica Mogherini convened a meeting of the Global Tech Panel ahead of the UN General Assembly to contribute to the EU's thinking and positions on how multilateral cooperation - at the UN level and beyond - can ensure a safe and prosperous digital future.

The global tech leaders focused their discussion of 23 September on ongoing work on Lethal Autonomous Weapons systems, a top priority file where the EU is seeking to promote a common understanding on a global legal and ethical framework.

Multilateral cooperation is critical to address such global challenges as Artificial Intelligence and how to manage Lethal Autonomous Weapons. Announcing on 26 September that the EU has joined the Franco-German initiated Alliance for Multilateralism, High Representative Mogherini emphasised that the EU and the other members of the Alliance all want to "protect, reform and expand the multilateral system of governance" and that the Alliance's work on cyber security and autonomous weapons systems as well as on climate security would be critical. The High Representative also emphasised the need to expand collaboration with non-State stakeholders. "Governments and tech need to work together in partnership to solve global problems or at least contribute to solve global problems, said Mogherini. "The Global Tech Panel can offer important contributions to the Alliance's work by fostering genuine conversations in a problem-solving spirit," she added.

The week of meetings in New York also brought tech to the table of a variety of other discussions, including regarding conflict mediation.

At the Ministerial Meeting of the United Nations Group of Friends of Mediation, a joint initiative of Finland and Turkey, High Representative Mogherini stressed the opportunities and challenges that digital technologies offer with regards to mediation, and again drew on the example of the Global Tech Panel.

Technology such as social media can make mediation processes much more inclusive: they can make the people's voice heard, and they can also help explain the rationale of a peace deal in real time. At the same time, the challenge for mediation teams is to filter out noise and disinformation that could reduce space for mediation. It is up to the mediators themselves to exploit the potential of new technologies while minimising their risks.

"This is one of the areas in which the Global Tech Panel that we have established with tech leaders from different backgrounds, from different parts of the world can contribute," said Mogherini, "not only to the benefit of the European Union and its Member States but of all."

Members of the UN Secretary-General’s High-level Panel on Digital Cooperation also joined the session. In a joint meeting on 23 September, EU High Representative Mogherini and UN Secretary General Guteres discussed cooperation on the implementation of the recommendations issued earlier this year by the UN Panel. The members of the UN Panel met with the Global Tech Panel in April 2019 before finalising their report.