Lina Zettergren is a Judge Referee at the Supreme Court in her native country, Sweden. She joined EUPOL COPPS as a Senior Criminal Justice Expert in October 2019. In her role in Ramallah, she supports changes in the Palestinian criminal justice system, including issues related to fair trials, witness protection, anti-corruption and access to justice. But if you ask her to name a project especially close to her heart, she will immediately talk about mentoring and empowering female lawyers. 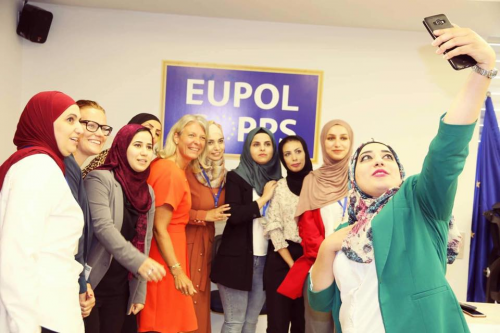 “Coming from a country like Sweden, where gender related issues have been debated for a long time now and which has a feminist foreign policy, I find it important to empower women everywhere. The idea is for women to find role models and increase their own influence in their professions,” Zettergren says.

Elaborating on why she considers this important, she states, “Greater female empowerment is expected to have a positive influence on issues such as access to justice. Studies have shown that greater women’s participation in the justice system can increase the number of women that seek justice, just to name one positive outcome”.

As part of this work, she and her team advised and supported the Palestinian Bar Association (PBA) on creating a network for female lawyers. This network coordinates and shares information on issues of relevance to them. “The network the PBA established is the first female network of lawyers in Palestine,” Zettergren explains.

FAMILY LAW AND GENDER-BASED VIOLENCE IMPORTANT FOR EVERYBODY

The Swedish expert is keen to stress that the network is not just to talk about ‘women’s issues’. “Questions like family law or gender-based violence are indeed highly important but have traditionally been considered questions for women. They are in fact questions for everyone. This professional network is open for all questions which women encounter in their profession in order to make way for them to occupy the same professional space as men. For example, being assigned the same cases, paid the same salary for the same work and holding management positions to the same extent as men”.

Zettergren emphasises the value of having managers who push for change. She thanks the Head of the PBA, Mr Jawad Obeidat as well as Ms Mai Attalah, EUPOL COPPS’ focal point at the PBA, for their efforts to promote gender equality. “Women make up 30 % of all active lawyers in Palestine. We therefore advise to have at least three women on the board of the PBA. Mr Jawad Obeidat has been very encouraging and supportive of our joint efforts. Fair representation will help to motivate young female lawyers to advance in their careers and will benefit the judicial sector overall”.

ENCOURAGING A CULTURE OF MENTORSHIP FROM EXPERIENCED TO YOUNGER PALESTINIAN LAWYERS

Encouraging a culture of mentorship within the Palestinian justice sector, where more experienced lawyers can meet and provide advice and support to younger generations, is also part of the work being done by EUPOL COPPS. Zettergren has positive experience of mentorship programmes herself.

“Mentorship is based on voluntary association – you take part because you want to and so both the mentor and mentee need to be devoted to the project. When I was a student, I took part in a female mentorship programme with mentors at law firms. We had a dialogue about their professional challenges and I got a useful insight in their daily work. Mentorship provides an opportunity to ask the sort of questions that you would not normally be able to ask in a setting such as an interview. In addition, it gives you free access to career advice from someone more experienced. It definitely improved my professional self-esteem,” she says.

Zettergren underlines that mentorship programmes are not just relevant for women but for all professionals who want to grow in their career.

Background: Launched in January 2006, EUPOL COPPS, an EU Police and Rule of Law Mission, supports the establishment of sustainable and effective policing and wider criminal justice arrangements under Palestinian ownership in accordance best international standards.  Read also about the EUPOL COPPS' very recent support to the female network of the Palestinian Bar Association.

Disclaimer: the photo was taken before the pandemic. The civilian CSDP Missions follow the internationally recommended health precautionary measures.