What started as a symbolic gesture in a few countries, with a few volunteers, has now become a global movement, involving hundreds of people and collecting tons of waste on beaches, rivers and lakes across the world, reaching more than 80 countries in the 2019 edition. On the 18th of August, we officially launch the 2021 edition of the #EUBeachCleanup, together with the UN and with the support of the bluest of friends, the Smurfs. This year’s campaign focuses on the protection of marine life, with physical and digital actions for everyone to join. The campaign will reach its climax around the World Coastal Clean-up Day on 18th September. 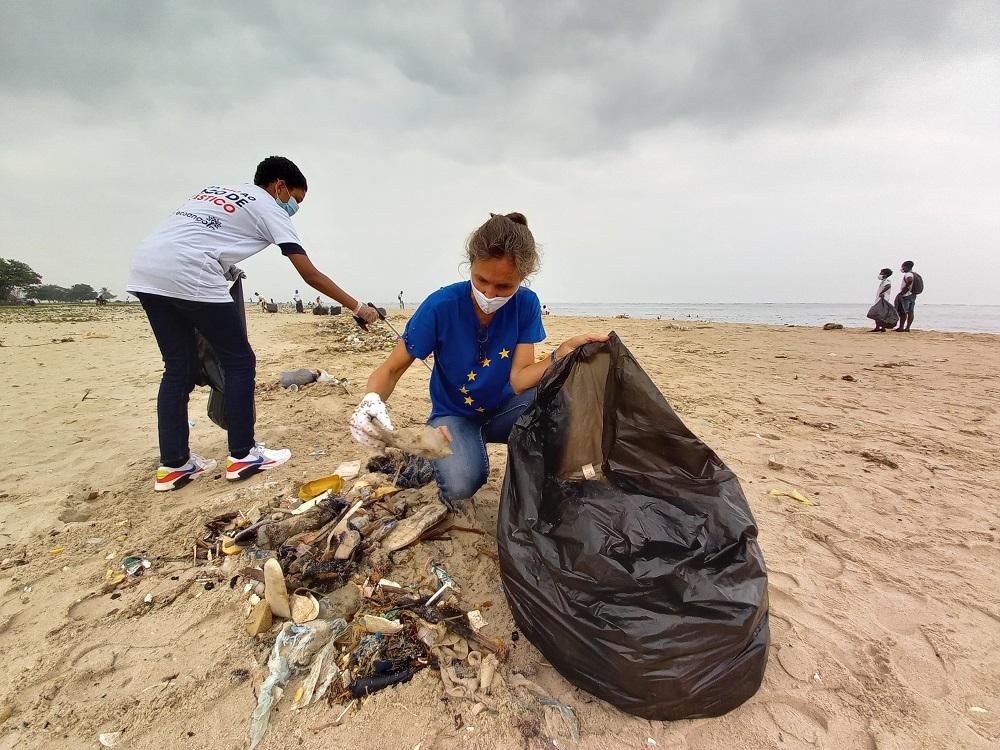 Photo from this year's edition of a #EUBeachCleanup action in Angola.

Every year, we are confronted by frequent natural disasters caused by climate change. From raging wildfires to uncontrolled floods this summer, our planet is calling out for us to take action now.

Pollution is one of the main threats to the balance of our ecosystems and quickly finds its way from the land to our oceans. Plastic litter, which often sea creatures mistake for food, is poisoning and degrading marine environment. Each year, 8 million tonnes of plastic end up in the ocean. This is the same as dropping every minute, over an entire year, a full truck of plastic garbage into the ocean.

The #EUBeachCleanup campaign is born from the need to protect the environment and the EU’s global efforts to tackle climate change and reduce plastic pollution. It aims to raise awareness and encourage individual participation to protect marine biodiversity across the globe.

Who can join the #EUBeachCleanup and how?

A simple water drop can create a ripple effect. A simple gesture can ignite a powerful wave! Individual actions can turn into a movement to protect our oceans and their biodiversity. Everyone can join the #EUBeachCleanup. From children to grown-ups, individuals and organisations. At the beach, on the riverside or from home. Everyone is welcomed to take part in the movement to contribute to a cleaner and more sustainable way of life.

#EUBeachCleanup participants can join by taking part in physical or digital activities.

Where possible, local #EUBeachCleanup activities will be organised. EU Delegations, European Commission Representations, UN local groups amongst others are organising activities that everyone can join. Explore the calendar of events to check the next activity near you.Would you like to gather your colleagues, friends or family and organise your own #EUBeachCleanup activity? You can write to eu-beach-clean@ec.europa.eu to enrol and your event will be added to the calendar.

You can also join the campaign by taking individual actions and log them in the #ActNow app, supported by the United Nations (available for Android and ios). You can track your daily habit of ‘Pick up waste from nature’. You can also explore a bit more about the impact of plastic on marine biodiversity by taking the #EUBeachCleanup 2021 journey on the app.

Individual actions can work as a powerful trigger. The #EUBeachCleanup is also about inspiring others. Next time you go for a walk, try to collect some of the litter left behind and share it on social media by using the hashtag ‘#EUBeachCleanup’.

Local actions to a common problem

The EU Delegation to Tanzania has been one of the firsts this year to lead by example. It has organised a beach clean-up, gathering many, and collecting almost half a tonne of waste – 465 kg. Following the message of the Head of Cooperation of this EU Delegation, this is not a one-time action, we must reflect daily on the resources we use and how they are disposed of afterwards.

From the Netherlands, the Representation of the European Commission has gathered volunteers who picked up 2.759 cigarette butts in Vlissingen. A single cigarette butt can contaminate 8 litters of water!

In Angola, the EU Delegation organised the #EUBeachCleanup event, where 300 participants came together and collected 500 bags of waste. An impressive figure that demonstrates the need to be more aware of how we take care of our waste and the impact that it has on our near environment.

The message is clear: let’s not wait for tomorrow, let’s #ActNow to protect our oceans and their biodiversity!

Organised since 2017, the #EUBeachCleanup campaign makes a strong call to action every year, building momentum for the adoption of ambitious measures to protect the ocean at international level.

In 2021, the EU is joining forces with ActNow, the United Nation’s campaign for individual action on climate change and sustainability. In line with the upcoming UN Biodiversity Conference in October, this year’s global campaign focuses on the theme of marine biodiversity. Earlier this year, #EUBeachCleanup was recognised as a Sustainable Development Goals good practice.

80% of marine litter globally is plastics (IUCN 2018). At legislative level, the European Union is at the forefront of the battle. Within its own territory, the EU has adopted legislation that will curb single use plastics (SUP). Around 84% of beach litter in the EU is made of plastics and around 50% are SUP items. Thanks to the Single-Use Plastics Directive, a number of the single-use plastic items most commonly found on the beach, can no longer be placed on the EU market as of July 2021.