HR/VP Blog - Europe is facing a perfect storm: energy prices are up, economic growth is down and winter is coming. The Kremlin is using energy as a political weapon. We must prepare ourselves for a possible gas cut-off, principally through savings, diversification and solidarity among us. At the same time, we must accelerate investments in renewables and wage a global campaign for energy efficiency and savings to ensure sustainable energy access to all while staying within planetary boundaries. 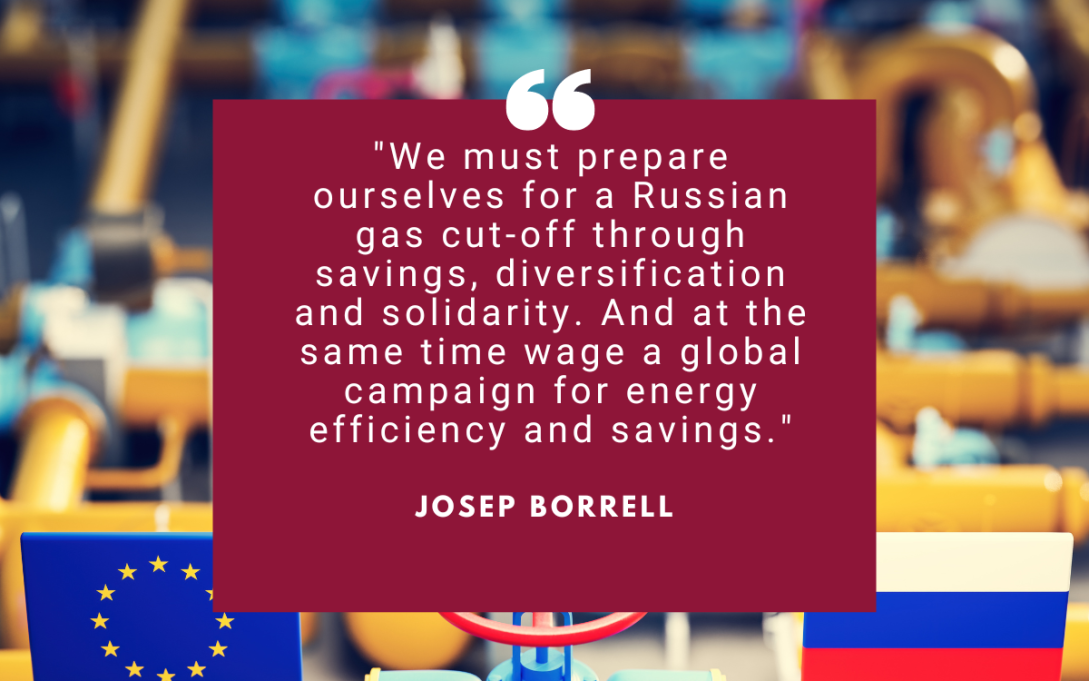 When it comes to energy, Europe faces a dilemma: it needs to balance its short-term goals – to wean itself off Russian oil and gas while getting through the winter – with its long-term net-zero targets under the Green Deal. And it must ensure that its internal choices are compatible with its external commitments. There is no point pretending that doing so is easy, cheap or without trade-offs. But it is possible, if we invest seriously in energy savings, renewables and solidarity, both at home and around the world.

Winter comes every year but the one we face promises to be exceptional. There is real uncertainty over whether the EU will have enough gas (i.e. volume) and whether it will be affordable (i.e. at what price). While oil prices have come down to where they were at the start of the war in Ukraine, gas prices are more than four times the price of end-February and almost ten times what they were a year ago.

We know the reason. The energy price hikes did not start on 24 February, however, as for many other issues, Russia’s aggression has made it much worse. Russia is using energy as a weapon: it has already cut or reduced supplies to 12 member states, in clear breach of contract. Last week it cut supplies trough Nord Stream 1 to only 20% of its normal capacity. By creating shortages and nervousness in the market, it guarantees the exact price rises from which it profits itself. We should prepare ourselves for all scenarios including one where Russia cuts supplies altogether, at a moment of its choosing.

“We have already managed to cope with an overall reduction in the share of Russian gas imports from 40% at the beginning of the year to around 20% today.”

We have already managed to cope with an overall reduction in the share of Russian gas imports from 40% at the beginning of the year to around 20% today, principally by buying more LNG, whose share of gas usage has doubled from 19% to 37%. We have also made progress in buying more pipeline gas from Norway, Algeria and Azerbaijan. In July, I co-chaired the EU-Azerbaijan Cooperation Council where we welcomed the recent signature of a Memorandum of understanding on a Strategic Partnership on Energy. Longer-term, we can expect more progress with this diversification drive. But the hard truth is that for this winter, we are approaching the limits of what extra gas we can buy from non-Russian sources. So, the bulk will have to come from energy savings, i.e. demand reduction.

A 15 % reduction of EU gas consumption

The experts from Bruegel as well as those of the Commission estimate that we will need an overall reduction of EU gas consumption of 15% to manage a complete stop of Russian supplies. Of course, there are significant variations among EU countries in their exposure and vulnerability to a possible Russian cut off. On 26 July, the Council adopted an important set of measures. Its central plank is  this overall gas savings target of 15%. But it will take into account different national circumstances and efforts, for instance the degree to which infrastructure exists that connects individual countries to their neighbours. For now, this is a voluntary target but if circumstances so dictate, member states can decide to make the savings compulsory.

“At heart, this is about how we prepare ourselves for a tough winter and how we organise solidarity among us, pooling risks and resources. We need to develop a real Energy Union. ”

At heart, this is about how we prepare ourselves for a tough winter and how we organise solidarity among us, pooling risks and resources. It is a familiar debate for us Europeans: we went through a comparable process at the beginning of the pandemic. At first, the tendency was for every country to go it alone, but then, quite rightly and successfully, EU countries opted for joint procurement of vaccines, which guaranteed all EU citizens had equal access to life-saving vaccines.

After Russia’s annexation of Crimea, we should have but didn’t develop a real EU energy union, built around diversification away from Russia and investing in energy efficiency and home-grown and climate-friendly renewables. This time the stakes are even higher: we cannot afford to make that same mistake again.

As we in Europe think about our current energy dilemmas and focus on savings, we need to remember that for the vast majority of humanity the challenge is how to get more energy: 600 million of Africans lack secure access to electricity according to the IEA. Demographic and economic trends make it clear that we need a massive acceleration of energy efficiency and renewables to meet the growing demands for energy world-wide and avoid runaway climate change at the same time. This is what EU energy and climate diplomacy are about since many years: forging longer-term partnerships, with investment, technology and finance. Good examples include our promising work to shape Just Transition Energy Partnerships first with South Africa, but also with others.

“Despite our short-term needs for fossil fuels to partially replace supplies from Russia, we are not in any way promoting a global renaissance of fossil fuels.”

Despite our short-term needs for fossil fuels to partially replace supplies from Russia, we are not in any way promoting a global renaissance of fossil fuels. We need in particular to avoid aggravating the problem of so-called “stranded assets” for fossil fuel producers. That is why we also work with our partners on the production and trade of clean hydrogen. It has great potential to become a major new source of energy and some of the existing infrastructure including pipelines could be re-purposed. This is one of the priorities under the EU strategy with the Gulf that we adopted last May. A large part of the EU’s alternative gas needs could also be ensured simply with a better management of oil and gas production and transit facilities, where the IEA estimates that over 50 bcm of gas is wasted to through leaks, flaring or venting. This is roughly the volume we need to cover a possible Russian gas cut off. It would also generate significant climate benefits.

The best energy of all, is the one you don’t need

But mainly, it is still true that the best energy of all is the one you don’t need. That’s why saving energy and improving energy efficiency has to get the priority it has long deserved. In the EU, we are now embarking on a serious effort at demand reduction. The Commission has proposed to raise the binding Energy Efficiency target to 13% by 2030, along with additional savings measures in industry, buildings and elsewhere.

Doing so is necessary to get through the next winter, but this will also give us the necessary credentials to put the international focus and launch a global movement on energy savings and efficiency in the run up to the UNGA and COP27 in Sharm El-Sheikh. We can draw inspiration from the Methane Pledge, a real success of EU climate diplomacy: the EU proposed it, the US partnered with us and in the end 110 countries signed, representing 70% of the global economy. We need a similar global campaign around energy efficiency and savings, and in the coming months I will invest in helping building the necessary coalition.

The sanctions against Russia are working

What next for EU security and defence?