Event: 6th Conference “Digital revolution and shifts of global power : which regulating role for the EU?”

In a complex and changing world, it is important to understand how the European Union aligns its values and interests with humanity’s common global challenges.

The 2021-2022 conference cycle will address the main international political, economic and cultural challenges of the XXI century and the creation of a common European Union strategic culture through open dialogue with eminent scholars and highly-qualified panellists from various cultures and regions of the world.

This conference cycle is jointly organised by the Royal Academy of Science, Letters and Fine Arts of Belgium and the European External Action Service, under the patronage and effective participation of Josep Borrell, High Representative for Foreign Affairs and Security Policy and Vice President of the European Commission.

The conference cycle is co-chaired by Didier Viviers, permanent Secretary of the Academy, and Professor Mario Telò, who, as scientific director, will introduce the 2021-2022 programme. 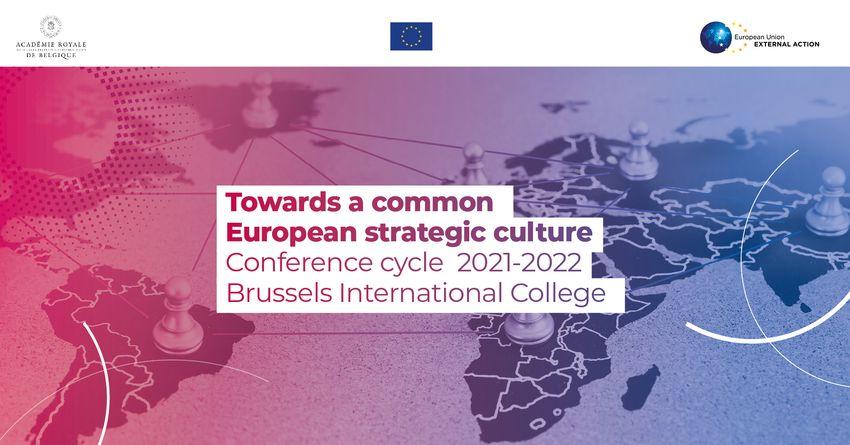 The 6th conference “Digital revolution and shifts of global power : which regulating role for the EU?” will take place on 30 May 2022, from 5pm to 7pm (Brussels time). There is an evident gap between digital interdependence and digital governance, both at the global and regional levels. The Digital issues are becoming power stakes notably between China and USA. The EU is lagging behind but potentially represents the culture of public regulation through multilateral institutional setting.

The 5th conference "Europe and its Southern Neighbourhood: how large is the sea between us?" will take place on 25 April 2022, from 5pm to 7pm (Brussels time). The quasi- failure of the Arab spring of 2011, the crisis of the negotiation process with Turkey, the downgrading of the Israeli-Palestinian conflict, the Islamist terrorism and unregulated migration flows, the tragedies of immigrants and refugees are increasing political instability and are threatening the collapse of both economic interdependence and cultural dialogue with the Islamic countries. However, common neighborhood, shared interests (energy provision, trade, and investments; regulation of migration) and geographic proximity oblige both sides to look for new ways of cooperation and dialogue.

The 4th conference: “Reckoned with: asserting Europe’s distinctive power in a multipolar world” took place on February 7th, 2022, from 5 to 7 pm (Brussels time). What means to be a global power in the 21st century? The multipolar order is shifting from multipolarity towards a bifurcation between China and USA affecting security, politics interests, alliances, and culture. Security dilemmas also affect EU-Russia relations. On the one hand, according to both HRVP Josep Borrell and the French rotating presidency, the surrounding threats and the data on general rearmament are pushing the European defense on the current political agenda, including an open transatlantic discussion about NATO’s future. On the other hand, coping with internal diversities is urgent. How? The open debate focuses on alternative ways.  And the overarching question is: how can the EU open strategic autonomy make concrete steps ahead while containing this major risk of becoming the playfield of alternative interests?

The 3rd conference "The difficult emergence of an EU’s common strategic culture" took place on 17 January 2022 from 5 to 6:30 pm (Brussels time) - ONLINE ONLY Building a Common foreign and security policy needs the gradual construction of a shared strategic culture. Conflicting memories, diverse threat-perceptions, distinct national traditions, alternative conceptualization on national sovereignty or rule of law, different history of external action in the near and far abroad... are serious obstacles to common action. On the other hand, the rapidly changing external world urgently demand internal unity: what are the viable options to go forward?

LECTURER
Karen E. Smith, Head of the Department of International Relations at the London School of Economics and Political Science.

DISCUSSANTS
Giovanni Grevi, Professor of European foreign policy and international affairs at the College of Europe (Bruges), Sciences Po (Paris) and the Brussels School of Governance.

The 2nd conference "Universal values in question: The cultural dimension of geopolitical competition" took place on 14 December 2021 from 5 to 7 pm (Brussels time)

Europe and its agenda are situated in a globalized but fragmented world, characterized by alternative cultures, multiple models of modernity, authoritarian regimes and possible civilization clash. To what extent do ideational diversities allow for multilateral convergences without shifting to closed relativism? How isolated and how communicative is the EU’s identity? How could a multidimensional dialogue with far and near abroad partners, beyond both Eurocentric arrogance and mere utilitarianism, combine the defense of EU’s values with the search for the conditions of multilateral alliances for the common goods?

CHAIRPERSON
Mario Telò, Member of the Royal Academy of Belgium

The 1st conference "The Next Generation EU-recovery plan and its global implications" took place on 28 October 2021 from 5 to 7 pm (Brussels time).

The success of the Next Generation EU recovery plan will be decisive for the future of Europe in many domains: digital, energy policy, sustainable economy as well as fiscal policy. What role will Europe’s recovery play in the current international context of competition/cooperation (G7, G20)? How relevant is the NGEU in a world facing growing socio-economic imbalances and inequalities? To what extent does the recovery plan contribute to the EU’s international identity and leverage the EU’s foreign policy?

CHAIRPERSON
Isabelle Ferreras, President of the Royal Academy of Belgium